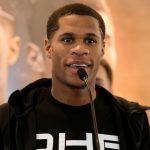 The WBC has reinstated Devin Haney as its world lightweight titleholder, the sanctioning body announced Wednesday.

The decision was rendered by the WBC Board of Governors in accordance with their rules and regulations. The sanctioning body outlined their ruling in the following statement:

“Pursuant to, and consistent with, the governing WBC Rules & Regulations, and after carefully considering the positions of all the boxers involved and the special circumstances which the present global health crisis has created, the WBC Board of Governors conducted a vote which resulted in the following ruling:

At its annual convention in Cancun, Mexico in October, the WBC elevated Vasiliy Lomachenko, who is The Ring magazine champion, as the “Franchise Champion” and Haney became the full titleholder.

Haney (24-0, 15 knockouts), who is ranked No. 2 by The Ring, made the first defense of the WBC on November 9 in Los Angeles, dropping unbeaten, but unheralded Alfredo Santiago of the Dominican Republic once en route to a unanimous decision. Haney suffered an injury to his right shoulder during the fight, which he had surgery for over a month later.

On December 13, the WBC named Haney the champion-in-recess and ordered mandatory challenger Javier Fortuna to face Luke Campbell for the world title belt. Both sides came to an agreement for the fight in January, which would have taken place on April 14 in Oxon Hill, Maryland, but was postponed due to the COVID-19 pandemic.

Haney’s representatives notified the WBC on March 23 that the 21-year-old had completely recovered from his shoulder injury and was fit to fight. Two weeks later, per a request of the WBC, Haney’s representatives produced medical clearance documentation that confirmed he was fit and able to resume his career. They also petitioned the WBC to reinstate Haney as its world titleholder.

Promoter Eddie Hearn told The Ring in an interview in late February he had penciled Haney to return to the ring in July. Due to the current pandemic that prohibits large gatherings in the United States, a return in July is uncertain to be a possibility.

Wednesday’s announcement comes a week after Haney made a statement on social media that read ‘can’t no white boy beat me … I fight a white boy 10 times. I will beat him 10 times.’

Haney has since apologized, denying he was a racist.