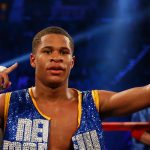 Yuriorkis Gamboa wanted those that were listening to know that he’s not “washed up,” during the announcement of his fight against WBC lightweight titlist Devin Haney, slated for Nov. 7 at the Hard Rock Live at Seminole Hard Rock Hotel & Casino Hollywood, Florida, live on DAZN.

“He’s a dangerous guy,” said Haney, who will be fighting for the first time since November 11, 2019, after undergoing shoulder surgery in December 2019 to repair a microscopic tear in his right labrum. “People shouldn’t look past Gamboa. I’m not. I’m healed and 100-percent and I feel great. Seeing how strong I am, I feel like haven’t lost anything.

“Gamboa is a tough guy, and lot of people don’t understand that. He took Tank Davis 12 rounds and the guy was in that fight for 12 rounds (in Dec. 2019), before he tore his Achilles.”

Haney, whose surgery took place after beating Alfredo Santiago by unanimous decision, stressed his first step back into the ring in almost a year had to be against someone formidable.

“I wouldn’t have it any other way,” Haney said. “I’m okay. I’m beyond the soreness. People didn’t know. My right shoulder completely fell out of the socket in the 12th round.

“The whole time off has made me even hungrier.”

The post Devin Haney stresses he’s not looking past Yuriorkis Gamboa on Nov. 7  appeared first on The Ring.