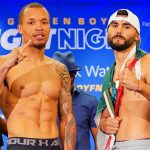 Unbeaten D’Mitrius Ballard learned and adjusted to the pro game as a super middleweight prospect. Now he intends to contend as a middleweight in a very competitive division.

Ballard will square off against hard-hitting Elias Espadas of Mexico Thursday night at the Ocean Resort Casino in Atlantic City, New Jersey. The 10-round bout will headline a Golden Boy Promotions card and will stream live on Facebook Watch (9 p.m. ET/ 6 p.m. PT).

At Wednesday’s weigh-in, Ballard weighed in at 159.8 pounds, marking the first time he has ever weighed below 160 pounds for a prizefight. Espadas weighed 159.2 pounds.

Ballard (20-0, 13 knockouts), who resides in the Washington, DC suburb of Temple Hills, Maryland last fought on Mar. 15, stopping Mexico’s Victor Fonseca in round five in Philadelphia. In his only bout of 2018, Ballard defeated Mexico’s Alan Campa by unanimous decision on Nov. 8.

Prior to the knockout of Fonseca, the 26-year-old Ballard had won his previous three bouts after putting together a string of five knockout wins.

“He dropped down to 160 (pounds), which excites me,” Diaz recently told RingTV. “Ballard is improving. He’s matured in the ring and out of the ring. Where he’s at now we believe he’s ready to step up and fight the bigger names.”

“The 160-pound division is going to be fun and exciting. It’s probably one of the hottest divisions in boxing today. The sky is the limit (for Ballard). The first 10-12 fights were a building process. He’s now at 20-21 fights. We believe he’s now ready.”

Espadas (18-4, 13 KOs) stopped Gabriel Lopez in rounds two of his last bout on Apr. 5 in his hometown of Merida, Mexico. In his previous fight on July 21 in Las Vegas, Espadas lost a close decision to middleweight contender Yamaguchi Falcao.

In the co-feature, fringe welterweight contender Eddie Gomez will face Saul Corral in a 10-round bout.

Gomez (22-3, 12 KOs) defeated Shoki Sakai by unanimous decision in his last bout on Oct. 18 in Indio, California. The Bronx, New York resident has won three of his last five bouts.

Corral (30-13, 20 KOs), who is originally from Mexico and now resides in Douglas, Arizona, has won his last two bouts after losing his previous three fights to unbeaten welterweights Emmanuel Medina, Alexander Besputin, and contender Rashidi Ellis.

Super middleweight Franchon Crews Dezurn (4-1, 1 KO) of Baltimore, who recently signed a promotional deal with Golden Boy Promotions, will square off against Louisiana’s Kayla Williams (0-2-1) in an eight-round bout.

The undercard of the Golden Boy Promotions card is scheduled to begin at 7:10 p.m. ET, which will also be streamed on Facebook Watch.

The post D’Mitrius Ballard is heading towards big opportunities, but first must deal with Elias Espadas appeared first on The Ring.