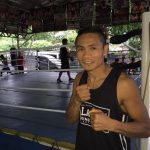 After nearly two years out of the ring, Donnie Nietes has a new promoter and management team.

The four-division champion from Murcia, Negros Occidental, Philippines has signed with MTK Global and D4G Promotions, the companies announced on Friday. The news means the 38-year-old Nietes, who has held world titles from 105 to 115 pounds, will be continuing his career, after some speculation that he could be retiring.

Nietes (42-1-5, 23 knockouts) has not fought since New Year’s Eve of 2018, when he outpointed Kazuto Ioka by split decision in Macau to win the WBO junior bantamweight title, putting him in elite company alongside Manny Pacquiao and Nonito Donaire Jr. as the only Filipinos to win titles in at least four divisions.

When the WBO ordered Nietes to face his compatriot Aston Palicte once again, following their draw in mid-2018, Nietes elected to vacate the title, putting his career on freeze through 2019 and into 2020. ALA Promotions, which had guided his career from his time as the janitor of ALA Gym into his title reigns, abruptly went out of business earlier this year, freeing Nietes to find a new promoter.

“I’m happy with what I’ve achieved so far,” said Nietes in a press release. “The journey has been wonderful and I will forever cherish how I worked hard in building my successful career. I’m not done yet and I am now hoping to get a fight with [Juan Francisco] Estrada, [Srisaket Sor] Rungvisai and Chocolatito [Roman Gonzalez].

Though he’s one of the most accomplished and respected Filipino fighters of his generation, Nietes still has yet to achieve a signature win, which is something he hopes to rectify in the near future.

“I want to be back as soon as possible,” said Nietes. “Whether it be December or January. I am currently preparing already and I am pleased to be going back in the ring after two years. I will bring pride to MTK Global, D4G Promotions and my country Philippines.”

MTK and D4G had signed another ALA veteran, junior featherweight Albert Pagara (32-1, 23 KOs), last month. Among the other fighters on the MTK roster are Hekkie Budler, Charlie Edwards, Carl Frampton, Jamel Herring and Tyson Fury.

“He’s already had tremendous success in his career having won world titles in four-weight classes, and we’re confident of securing some huge fights for him in the always-entertaining super-flyweight division,” added MTK Global Chief Strategy Officer Paul Gibson.