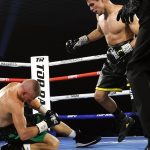 Hope you and your family are good. Watched Jose Zepeda vs. Ivan Baranchyk this morning, and what a treat it was. Multiple knockdowns, heart, guts, and power. Both of these guys have gone up in my estimation afterwards. I’d like to see them go at it again, after they’ve both fully rested of course.

I was worried for Baranchyk after such a heavy KO. Glad he seemed to be recovering, albeit understandably a tad unsteady, still. He was on his way to hospital, have you heard any news on him since? – Tom, Sweden

Leaving the hospital with our co-promoter, Tony Holden, is bruised but grateful warrior, Ivan ⁦@IBaranchyk⁩. Last night, he lost a brutal, unforgettable #boxing match. Thankfully, he’s well enough to talk about, and appreciate, the fight of 2020 with family. God is good. pic.twitter.com/ZeQZmXovJs

So, it looks like the former beltholder will be just fine, but he definitely deserves a long rest after that instant classic. The Boxing World has already decreed that Zepeda-Baranchyk is the Fight and KO of the Year, even though there are three months left in 2020. And, hey, I can’t complain about that. The fight was breathtaking. It belongs on a short list of multiple knockdown see-saw shootouts that include George Foreman-Ron Lyle (The Ring’s 1976 Fight of the Year), Michael Moorer-Bert Cooper (KO Magazine’s 1992 Fight of the Year), Derrick Jefferson-Maurice Harris (the Ring’s 1999 KO of the Year), Carl Thompson-Ezra Sellers, Orlando Salido-Weng Haya and Salido-Terdsak Jandaeng.

If anyone reading this hasn’t seen all of these fights, please pause right now and check them out on YouTube if you can find them. You’ll be glad you did.

Let me be clear: In the long run, I want to see great boxers and my favorites fight the best as often as they can. With that said, do you think great boxers, every now and then, should be spared criticism to take it easy and fight a handpicked opponent every now and then? I mean, wouldn’t fighting killer after killer just absolutely wear you down physically, mentally, and emotionally?

I remember a lot of people crapping on Floyd Mayweather for choosing Andre Berto as his final (at the time) opponent. I defended Floyd’s choice. Regardless of how disappointed I was about his fight with PacMan… that was still a serious scalp to earn. So if he wanted to coast for his curtain call… hadn’t he earned it? If a guy like Vasiliy Lomachenko can beat a guy like Teofimo Lopez, then decide to hang it up after lining up a fight with a lower tier guy for his farewell fight… hasn’t he earned it?

Don’t get me wrong: I don’t want my guys to get complacent and fight nothing but slouches while the best of the best wait in the wings. But I don’t have a problem with Loma cruising against Anthony Crolla after his war with Jorge Linares… as long as he pursues guys like Lopez or Tank Davis afterwards. I don’t have a problem with Josh Taylor or Ramirez fighting a couple nobodies… after they fight each other.

What do you think about this? What’s your take, Dougie? – Greg K.

I think you’ve got the right attitude, Greg. It’s a balanced outlook (something that is a rarity these days), and for boxing fans it means they want to see popular or elite fighters last a while.

You’re right about Mayweather. He’s far from my favorite boxer, but he had a right to leave the sport on his terms in 2015. If you thought the Berto fight was garbage, you didn’t have to watch. (I would have skipped it if I wasn’t editor of RingTV.com).

I don’t get the #Salty Saps on Twitter who call Canelo Alvarez a “cherry picker,” and then bring up Rocky Fielding and the WBC-proposed fight with Anvi Yildirim as “proof” of this. Hey, dips__ts, Alvarez faced Fielding after back-to-back fights with Gennadiy Golovkin and prior to back-to-back fights with Daniel Jacobs and Sergey Kovaelv. The rematch with GGG was a physically taxing 12-round bout, the Fielding bout took place three months later.

Here’s the thing, if fans only want tough, elite-level matchups between top-tier fighters, they have to understand that some of the men who run that gauntlet will burn themselves out. Corrales never wanted to take it easy, and he paid a heavy price for his warrior’s mentality. Photo by Tom Casino-SHOWTIME

We all know that the late action hero Diego Corrales was not the same after his unforgettable war with Jose Luis Castillo in May 2005, but part of his steep decline after that Fight of the Year/Decade was due to back-to-back fights with Joel Casamayor and his come-from-behind stoppage of Acelino Freitas prior to his showdown with the Mexican punisher. In a three-year span (October 2003-October 2006), Chico faced Casamayor (twice), Popo, Castillo (twice) and then the rubbermatch with Cepillo. Savage sparring sessions/training camps and struggles to make 130 and 135 pounds compounded the damage to his body during this time. Corrales was a shell BEFORE he stepped into the ring for his final bout (vs. Joshua Clottey in April 2007).

Another action hero who gave all he had to give in a short time frame, and in just four consecutive bouts, was Israel Vazquez, who went to war with Jhonny Gonzalez and then engaged in a modern classic trilogy with Rafael Marquez in a 18-month span (September 2006-March 2008).

I don’t know if you recall a Colombian bantamweight named Yonnhy Perez, but he earned a shot at the IBF title with a hard-fought 12th-round stoppage of Silence Mazbuza and then took on IBF beltholder Joseph Agbeko (who he beat), Abner Mares (who he drew with) and Agbeko again (in a loss) in successive 12-round battles. He was fizzled out by the time he faced Vic Darchinyan in the third-place bout of Showtime’s 118-pound tournament.

I think it works out best when top dogs mix in quality-but-lesser opposition between their showdowns with fellow elite boxers. Sugar Ray Leonard blasted solid-but-overmatched Davey Boy Green between Wilfred Benitez and back-to-back bouts vs. Roberto Duran. He took out Larry Bonds and Ayub Kalule (who was quite formidable) between the “No Mas” rematch and his super fight vs. Thomas Hearns. De La Hoya’s fight with Darryl Tyson followed a banner 1995 and set up his legacy showdown with Julio Cesar Chavez.

Oscar De La Hoya was also good at taking “breathers” here and there. You couldn’t fault him for facing Darryl Tyson after his 1995 Fighter-of-the-Year run against John-John Molina, Rafael Ruelas, Genaro Hernandez and Jesse James Leija. Or for making a non-PPV title defense against David Kamau after back-to-back bouts vs. 41-0 Miguel Angel Gonzalez and the great Pernell Whitaker.

And it was perfectly OK when he faced respected contenders Oba Carr and Derrell Coley between his PPV headliners vs. fellow pound-for-pounders Ike Quartey, Felix Trinidad and Shane Mosley in ’99 and 2000.

De La Hoya’s nemesis Fernando Vargas fit in IBF mandatory Ross “the Boss” Thompson between showdowns with Quartey and Felix Trinidad in 2000. That same year, Tito took care of his WBA mandatory, Mamadou Thiam, between his attacks on U.S. Olympians David Reid (the 1996 gold medalist) and Vargas. Nobody complained the “lesser” fighters in the schedules of De La Hoya, Trinidad and De La Hoya because they frequently faced the best (including each other).

Of course, I should point out that the “balanced” stars that I’ve noted were active when elite boxers fought three or four times a year, and generally faced legit contenders when they weren’t fighting each other.

Anyway, I could continue down this rabbit hole for another 5,000 words but I trust readers get the point.

Greetings from Crimea, Dougie! I am pleased to read your answers to fans’ questions. I have a short question for you. How would you place these guys in the ranking considering their natural talent and skill: Ryan Garcia, Devin Haney, Teofimo Lopez, Shakur Stevenson and Tank Davis? I agree with your top pick, Muzafer (you have a cool name). I think Stevenson has the best blend of natural talent and skill. However, I would place Lopez, who you have at No. 4, right under Shakur at No. 2. I think Teofimo is the total package: natural boxing ability, dynamic athleticism (more so than Stevenson) and world-class technique. I’d put Haney at No. 3, Davis at No. 4 and Garcia at No. 5 (although I really think that Tank and King Ry are even in terms of talent and skill; it’s just that Davis is more proven at this stage of their careers).

Props to Lopez for going for the glory vs. Lomachenko this month. Stevenson is currently at 130 pounds and could move to lightweight soon. I’d love to see a round robin between these guys. I think they they’re evenly matched, especially Nos. 3-5. Haney’s got better technique than Davis and Garcia. Davis has more physical strength and power than Haney and Garcia. And Garcia has more speed than Haney and Davis (although they’ve got fast hands too; all five young guns do, come to think of it).

Was looking at the Hall of Fame ballot for 2021 and saw some names that were pretty interesting. I wanted to get your opinion in comparing these three guys. My picks would be Floyd Mayweather, James Toney and Andre Ward with Wladimir Klitschko as a close one. I prefer Toney and Mayweather over Ward and Klitschko. I think Toney’s middleweight victories over Michael Nunn, Reggie Johnson, Mike McCallum and Iran Barkley plus Vasiliy Jirov and his heavyweight unlikely run triumphs over Ward’s Super Six win and shady victories over Kovalev. I think Carl Froch might be his best victory. What do you think about this?

Who had the better career in your point of view: Klitschko, Ward or Toney? Thanks! – Juan Valverde, Chula Vista It really depends on what you value more: accomplishments (in which case Wladdy’s got the edge), dominance/consistency (in which Ward’s got the edge, although Klitschko scores high there too with his long title reign), or quality of opposition (and you already presented that case for Toney). And I would add the names the top fighters that Toney didn’t beat – Roy Jones Jr., Montell Griffin, Hasim Rahamn, John Ruiz and Samuel Peter – he gets credit from me for sharing the ring with them; as well as the other titleholders that he beat, such as the great Evander Holyfield and underrated Prince Charles Williams.

Members of the BWAA can vote for up to five candidates. I haven’t received my ballot in the mail yet, but I’m probably going to go with Mayweather, Klitschko, Toney, Miguel Cotto and Nigel Benn (gotta include a Brit and at least one longtime balloter).

Coach quizzes Dougie on a former heavyweight gatekeeper and title challengers. How well do you know your 90s heavyweight nicknames?