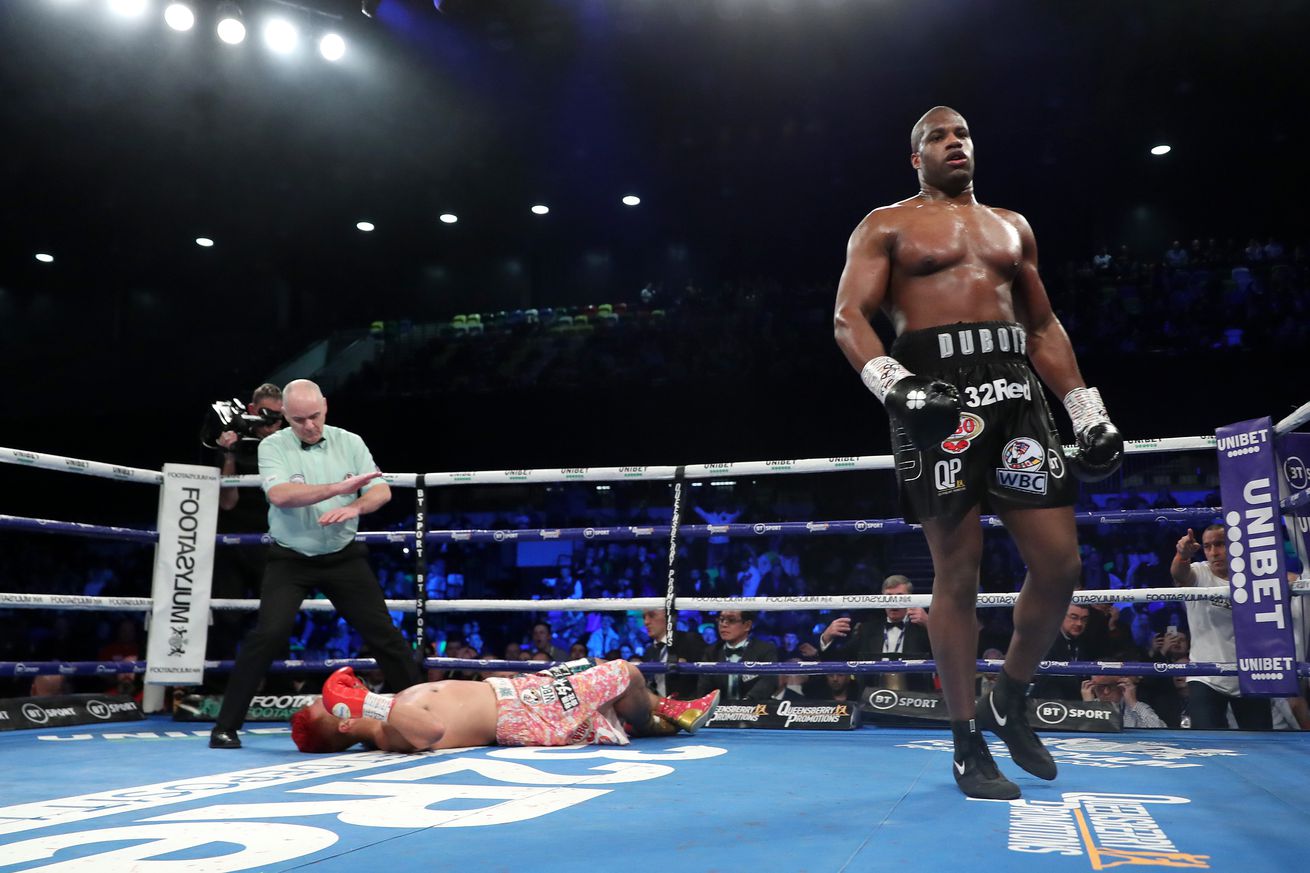 The British heavyweight prospect won another easy one today in London.

Top heavyweight prospect Daniel Dubois closed out a successful 2019 with an easy second round knockout of Japan’s Kyotaro Fujimoto today in London, winning the WBC “silver” heavyweight title, for whatever that’s worth.

Dubois (14-0, 13 KO) seemed to sting Fujimoto immediately with a jab, after which Fujimoto (21-2, 13 KO) didn’t seem particularly eager to engage with the much taller man. The Japanese heavyweight was dropped early in the second round on a stiff jab, and then knocked clean out with a right hand bomb. Official time of the stoppage was 2:10 of the second round.

Dubois, 22, has the makings and the hype of a real top heavyweight, and he passed his five tests this year, the biggest of which was a fifth round knockout of Nathan Gorman on July 13.

“I knew I had the power, and I was really confident in what I was going to do tonight,” Dubois said. “What can I say? The light switched on, and that was goodnight.”

Asked about what’s next, promoter Frank Warren says he plans to have Dubois back in April at London’s O2 Arena, and the idea of Dubois fighting Joe Joyce came up. Joyce’s manager said he’s interested, Warren and Dubois said they’re up for it. Joyce, for what it’s worth, is set to go out next on Jan. 11 in Germany, where he faces Marco Huck for the vacant European heavyweight title.

This took 62 seconds. Binienda (2-27, 2 KO) might not have even thrown an actual punch in this fight. Fury (3-0, 2 KO) is most famous so far for his appearance on “Love Island,” as he’s a handsome lad and all this, but he’s also a real 175-pound prospect at 20 years of age. There’s some genuine promise here, he’s not just a gimmick or a last name.

“I wasn’t looking for the knockout at all,” Fury said. “I just boxed to the game plan.”

Tommy’s father/trainer John Fury says there’s no rush with the youngster, so don’t expect to see any huge leaps in competition soon, which is probably wise. The kid’s got a real future if he really puts it all together.