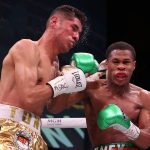 Haney (24-0 15 KOs) is raring to return to the ring and defend his crown for the second time after he was forced into surgery when injuring his shoulder in his first defense against Alfredo Santiago in Los Angeles in November.

The 21 year old has fully recovered and November 7 is the date promoter Hearn has earmarked for ‘The Dream’ to display his talents for the first time in 2020, with Russell Jnr and Gamboa the two men vying to take on the Las Vegas star.

Haney and long reigning WBC World Featherweight champion Russell Jnr (31-1 18 KOs) have become embroiled in a war of words on social media over the potential clash, while Gamboa (30-3 18 KOs) is aiming for a third shot at becoming a two-weight World champion – and Hearn expects to name Haney’s foe next week.

“Devin has been doing a great job in keeping his profile active during lockdown but now it’s almost time for get busy in the ring,” said Hearn. “November 7 is the targeted date for his return and the two main targets are Gary Russell Jr and Yuriorkis Gamboa. Both are great fights for Devin as he approaches a key stretch in his career to become standout star.

“Devin is ready to defend his WBC titles against all comers and I can’t wait to see him back in the ring in November.”

The post Eddie Hearn: Gary Russell Jr. and Yuriorkis Gamboa both targets for Devin Haney appeared first on The Ring.