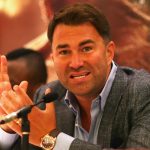 Coming up this Saturday from The O2 in London, Dillian Whyte meets Oscar Rivas for the interim WBC heavyweight title, live globally on DAZN. Sporting News caught up with the Managing Director of Matchroom Boxing, Eddie Hearn to discuss his ever-growing boxing stable.

Join DAZN to watch Whyte vs. Rivas and 100+ fight nights a year

Sporting News: The hot topic that is on everyone’s lips, when and where will the Joshua vs. Ruiz Jr rematch take place?

Eddie Hearn: We will be letting them [Team Ruiz Jr] know shortly the venue for the fight. Obviously, Ruiz Jr has his contractual obligations, he’s a stand-up guy, and he will honor those, so we are just going through the process. We have had some late offers, and runners come in for the rematch that we are exploring. I still think the clear front runners are New York and Cardiff and we will see what happens. I’m happy with Cardiff or New York, but I think there’s great arguments either way. Joshua just went to America to fight Andy Ruiz Jr, so he’s well within his rights to host the fight in Cardiff. The sensible thing and probably the advice from his management and training team is to do it in Cardiff, but there’s also props to be given for going to New York as well.

SN: Vasiliy Lomachenko vs. Luke Campbell was announced by the WBC but no official word from either fighter. What’s the current situation?

EH: We are very close with that now; we’re hoping that there could be an announcement made at the Whyte-Rivas fight on Saturday. Vasiliy Lomachenko and Oleksandr Usyk are both flying in for the fight on Saturday night, and we are tying up the final contract, August 31 at the O2 Arena in London, England.

SN: Speaking of Oleksandr Usyk, he had to pull out of his heavyweight debut against Carlos Takam due to an arm injury, when are we likely to see him back in the ring?

EH: I believe he will still fight Carlos Takam. He will be at the show on Saturday night in London. He’s getting that date-sorted now which looks like the end of September, probably against Takam and he’s also mandatory for the winner of Joshua vs. Ruiz Jr, so he’s in a great position.

SN: Is there a Katie Taylor vs. Delfine Persoon rematch on the cards?

EH: I had a meeting yesterday with Brian Taylor, Katie’s manager. We’ve reached out to Delfine Persoon’s team to see about a rematch, it’s defiantly a fight Katie wants, whether that’s next or the one after. I think now it’s about setting new targets for her; she’s become an undisputed champion at lightweight so what’s next? Probably becoming an undisputed champion at 140 pounds, but everybody wants to see the Persoon rematch. Amanda Serrano is a great fight that everyone is talking about as well, so I really think maybe a title at 140 then Delfine Persoon and Amanda Serrano. They’re the sort of the next three fights for Katie Taylor.

SN: Callum Smith has turned down an offer from Billy Joe Saunders, and the Canelo stories have started to dry up. When will a decision likely be made on his next fight?

EH: Callum Smith is ready to fight Canelo, but I don’t think Canelo wants to fight Callum Smith just yet. There’s a big perception about Callum Smith being an absolute beast within boxing, and they are quite right. He is a beast! I expect Callum to box again by the end of September, possibly looking to bring him over to the U.S in December as well”.

SN: Daniel Jacobs said after his loss to Canelo that he will be looking to step up in weight. When will we see the ‘Miracle Man’ next?

EH: Callum Smith, I think is a great fight for Daniel Jacobs. I think Daniel is going to want one fight at super middleweight to feel himself into the weight. He’ll still want a proper contender, but I think Daniel Jacobs will be a force to be reckoned with at 168 pounds.

SN: Otha Jones III has been busy in recent months, when will he be next out?

EH: He has been busy; he’s having a little rest now. He boxed at York Hall in London then he boxed in Providence the week after, so I’m going to let him have the summer off, and then he’ll be back again in September.

SN: Anthony Sims Jr. beat Vaughn Alexander in April. When is ‘The Magician’ next performing?

EH: He’s going to box in Mexico, August 24, I’m looking to give him one more fight. Then for me, he’s really got to go in and start attacking the super middleweight division or maybe even a fight against Callum Smith.

SN: Devin Haney was last out in May when he beat Antonio Moran via a seventh-round knockout. When will ‘The Dream’ be back in the ring?

EH: Devin Haney is a superstar! Everyone is talking about him at the moment. We are waiting on Canelo because he could be on the Friday night before Canelo, If Canelo doesn’t fight then Devon will be in September headlining his own show or maybe one with Oleksandr Usyk as well.