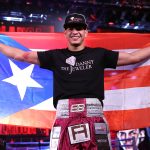 It was hard to believe Edgar Berlanga did anything wrong in the 106 seconds he needed to take apart Lanell Bellows in a scheduled eight-round super middleweight bout Saturday night on the Vasiliy Lomachenko-Teofimo Lopez undercard at the MGM Grand in Las Vegas.

There was one thing Berlanga (15-0, 15 knockouts) missed in recording his 15th-straight, first-round stoppage: A combination that trainer Andre Rozier wanted that required Berlanga to step over, shoot the right hand over, follow with a left uppercut, pivot and follow with a short left hook.

Berlanga did not do any of that. He had to pay in push-ups. He had the energy to do it.

He busted up Bellows, who had never been stopped before, causing a cut over his left eye and leaving the 34-year-old Bellows (20-6-3, 13 KOs) with a bloody left ear. “Once he got in the ring, I looked in his eyes,” Berlanga said. “He didn’t want to be there. So, I had to get him out.

“Now, I’m the first person to stop him, and (I did it) in the first round. So, you know, it just off emotion, off how I really felt. For all the critics out there, all the media, I just felt it in me that I had to say that.

“We’re looking to fight in December. I just spoke to Bob (Arum) right now. He’s looking to put me on in December. I’m actually looking forward to fighting in Puerto Rico and then also in June on Puerto Rican (Parade) weekend at Madison Square Garden, so God willing, everything goes right, we can make it happen.”

The post Edgar Berlanga continues his knockout streak to reach 15 appeared first on The Ring.