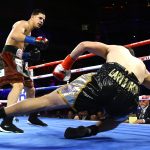 Like many Puerto Rican fans, Edgar Berlanga remembers the pride he felt watching Felix Trinidad while growing up. Young Berlanga was in attendance for two of his fights at Madison Square Garden, against William Joppy and Bernard Hopkins, and then followed Miguel Cotto once the mantle was passed down.

Berlanga, a 22-year-old New Yorker, hopes to elicit similar passion from fans as those two legends. So far in his early career, Berlanga has produced fireworks, scoring 13 knockouts in his 13 fights, all in round one. He’ll make his third appearance at The Garden this Saturday, when he faces Alan Campa (17-5, 11 KOs) in a super middleweight fight scheduled for eight rounds at the Hulu Theater on the Shakur Stevenson-Miguel Marriaga card.

“Obviously Trinidad did it, Miguel Cotto did it,” said Berlanga of fighting at The Garden. “And now it’s my turn to do it.”

He may not be able to hear the cheers, since the card will take place without fans in attendance due to concerns over the Coronavirus pandemic, but fans will still be able to watch his fight on ESPN+, right before the main Top Rank on ESPN card begins.

If recent history holds form, his fans would have been in for a short and sweet night. Four years after turning pro, his longest outing in the ring was his last, this past December against once-beaten Spaniard Cesar Nunez. It went a total of two minutes and 45 seconds. Berlanga insists he hasn’t been trying for early finishes; he just hits opponents hard and they fall down.

“I have that killer instinct and once I step in that ring I want to hurt. I have that killer mentality so either way my shots are always gonna throw hard but I always go in there with a poised style. I use my jab, use my feints. If I see any openings I’m gonna take them, and if the guy’s hurt and I can get him out of there, I’m getting him out,” said Berlanga.

“I got that Puerto Rican blood in me, that’s what we bring to the table, you see Cotto, you see all the greats, we have that killer mentality, especially coming from Tito Trinidad, we watched him growing up.”

Boxing was something that came to him at an early age. His father had been away in prison for some time during his early childhood, and when he was released, Edgar’s mother asked his father to find an outlet for the hyperactive child. That’s when his dad brought him to a boxing gym to train under Benny Roman.

He’d spend his days in Brooklyn with his father, working on his craft in the gym, but would come home at night to his mother’s home the Baruch Houses public housing projects on Manhattan’s Lower East Side.

“Obviously there’s a lot of robberies, a lot of gangs, so I grew up with that. Lower East Side was just harder because I was surrounded by the project buildings,” said Berlanga.

His escape was the boxing ring. Beginning at age 8, Berlanga says he had a record of 162 wins and 17 losses, including a Junior Olympics national title, and a trip to Russia to compete against Cubans and Russians at the Velez Cup. Now as a pro, Berlanga has surrounded himself with similarly diverse talent, training under Andre Rozier, Gary Stark Sr. and the rest of the team at the Sadam Ali Boxing Gym in Brooklyn. Among those in the gym with him are Richard Commey, Ivan Golub and Sergiy Derevyanchenko, the latter of whom he has sparred with extensively for this camp. Derevyanchenko brings some first-hand experience on Berlanga’s opponent too, as the Ukrainian fought Campa in his fifth pro fight back in 2015, stopping him in four rounds back in 2014.

He’s also been doing some work with strength and conditioning coach Dave “Scooter” Honig, which he says has helped him develop his left hook power to match that of his more dominant right hand.

As much hard work as he puts into his training, he says it’s the hard work his mother has done which provides the greatest inspiration. She works at BronxCare Health System (formerly known as Bronx-Lebanon Hospital Center), and says she has to take a bus to the subway, and then another bus to get to work. She often wakes up at 5 in the morning, and returns at midnight after a double shift, only to do it all over again the next morning.

“I’ve seen my mom struggle for so long. Me looking at her, seeing her struggles, that pushes me everyday, so that one day I could be able to retire her from work,” said Berlanga.

“I’ve done seen that so many times, her waking up in the morning and it hurts and it bothers me, so that’s my motivation.”

Though Berlanga is rated no. 12 by the WBO at 160 pounds, he figures he’ll be competing at 168 pounds moving forward due to his growing body. Still, with less than 13 rounds cumulatively on his resume’, it’s hard to see him as a contender just yet. Berlanga knows that eventually he’ll see a second round in the pros, but, just like his approach in the ring, he’s in no rush.

“Eventually it’s gonna come, that’s why I train so hard. A lot of people don’t see it, but the people in the gym with me see it. And I’m putting all the amount of work as a world champion and I’m always the last one to leave the gym and I’m going extra and doing extra rounds in the bag because I know that day is gonna come,” said Berlanga.

“And if it don’t come now, and it winds up coming when I’m at an eliminator or at a world title fight, I’m gonna be very well prepared for that.”

The post Edgar Berlanga insists he isn’t trying for first round KOs, they just happen appeared first on The Ring.