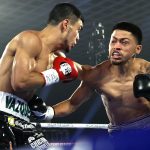 Featherweight Edward Vazquez looks like he can coin a phrase that the ‘fourth time is the charm.’

Vazquez has been scheduled to fight on three previous occasions throughout this summer on Top Rank cards in Las Vegas. To his chagrin, each fight was postponed within a few days of the fight taking place, as all three opponents tested positive for the Coronavirus.

Vazquez, who resides in Fort Worth, Texas, was facing a fighter in Ochoa who had won his previous nine fights.

Vazquez found himself in a hole moments into the second round as he was dropped by a sweeping right cross to the head. Vazquez was not visibly hurt as he beat the count.

The shorter Vazquez was effective in initiating exchanges, allowing him to outland and outbox Ochoa during the rest of the fight. The tactic worked as he won the last four rounds on two of the judges’ scorecards.

Martinez was game (2-2, 1 KO) was game, but the southpaw Jefferson was the more-effective fighter, outboxing Martinez during most of the exchanges of the fight.