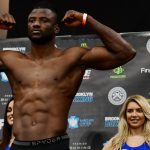 The 10-round bout will take place at the MGM Grand Conference Center in Las Vegas, Nevada and will precede the 10-round main event bout between junior welterweights Jose Pedraza and Javier Molina.

Ajagba (13-0, 11 knockouts), who is originally from Ughelli, Nigeria and now resides in Stafford, Texas, last fought on March 7, dropping Razvan Cojanu twice before the fight was stopped in round 9. The fight took place 11 weeks after a back-and-forth action fight against Iago Kiladze, where Ajagba overcame a knockdown to win by knockout in round 5.

After the win over Cojanu, Ajagba decided to part ways with manager Shelly Finkel and the Premier Boxing Champions banner. Last month, the 26-year-old signed a promotional deal with Top Rank and a managerial deal with James Prince, who also manages Shakur Stevenson, Tony Yoka, and Gabriel Flores.

Ajagba, who is now trained by Kay Koroma, cannot wait to get back in the ring.

“To all my fans, the wait is finally over,” said Ajagba. “I am ready to get back in the ring and do what I do best. I haven’t fought since March 7, and I’ve been looking for someone to devour. On Saturday, I finally get to do it.”

“I am delighted that Efe Ajagba will make his Top Rank debut as he continues his march to the top of the heavyweight division,” said Top Rank chairman Bob Arum.

Ramirez (4-1, 3 KOs), the two-time Olympic gold medalist from Cuba, will square off against Felix Caraballo in an eight-round featherweight bout. In his last bout on July 2, Ramirez avenged his loss in his pro debut by defeating Adan Gonzales over six one-sided rounds.

Caraballo (13-2-2, 9 KOs), who resides in Mayaguez, Puerto Rico, was dropped twice by Stevenson before losing by knockout in round 6.

Welterweights Jahr Tucker and Kasir ‘Mazzi’ Goldston, both of whom are 17 years of age, will fight in separate four-round bouts. Goldston, of Deer Park, New York, will square off against Isaiah Varnell (3-2, 2 KOs), while Tucker will face Deandre Anderson (1-1).

“Kasir Goldston and Jahi Tucker are two major talents, and we are excited to see their professional journeys begin here in Las Vegas.” said Arum.