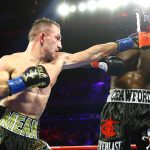 Egidijus Kavaliauskas believes he learned more with his loss to WBO welterweight world titleholder Terence Crawford than all his previous fights.

Kavaliauskas’ plan on the road back to another world title fight is to dominate Mikael Zewski Saturday night at the MGM Grand Conference Center in Las Vegas, Nevada. The 10-round main event to a Top Rank/ESPN show will follow a 10-round clash between former world featherweight title challengers Miguel Marriaga and Joet Gonzalez (10 p.m. ET/ 7 p.m. PT).

It has been almost two years since Kavaliauskas, nicknamed the “Mean Machine,” has won a fight. In his last bout on December 14, Kavaliauskas gave a decent account of himself early on in his fight against Crawford before he was dropped three times late in the fight, losing by ninth-round stoppage.

In his previous fight on March 30 of last year, Kavaliauskas (21-1-1, 17 knockouts) fought to a draw against fringe contender Ray Robinson.

Kavaliauskas will face a familiar fighter in Zewski, who has won his last eight bouts since suffering his only defeat as a pro at the hands of Konstantin Ponomarev in May 2015. Zewski (34-1, 23 KOs), who resides in the Montreal suburb of Trois Rivieres, was once signed to Top Rank before being released in 2016.

Despite being the favorite and Zewski struggling in recent wins against modest opposition, Kavaliauskas is not underestimating his opponent for Saturday.

“We fought on the same Top Rank shows years ago, so I’m very familiar with Mikael,” Kavaliauskas told The Ring this week. “He’s a tough guy and a warrior. This is going to be a tough fight for me. I anticipate us going at one another and producing fireworks in the ring.”

Despite the loss to Crawford, Kavaliauskas is credited with giving a decent account of himself early on in the fight. He thought he scored a knockdown midway through Round 3, but referee Ricky Gonzalez ruled that Crawford went down to the canvas from to a slip. Replays show Kavaliauskas landed a right hand to the chin and Crawford immediately grabbing onto Kavaliauskas before eventually dropping to his knees. Crawford took some big shots early on from Kavaliauskas but gradually broke the Mean Machine down.

Crawford would eventually gain control of the fight, punishing Kavaliauskas before dropping him once in Round 7 before finishing him off in Round 9. Kavaliauskas wishes he would have stayed on the game-plan that night.

“There was lots of learning from me in that fight,” said Kavaliauskas, who represented Lithuania at the 2008 and 2012 Olympic Games. “I made mistakes in that fight. I wished I would have stayed more focused and stuck to the game-plan from the beginning. That’s the biggest lesson I learned in the Crawford fight.”

Like several fighters, Kavaliauskas’ plan to return to the ring this year was held up because of the COVID-19 pandemic. Kavaliauskas’ return was also delayed due to a foot injury he suffered in a pick-up basketball game.

Before the gym in Oxnard, California reopened in July, Kavaliauskas worked out under makeshift premises at his home in nearby Camarillo.

“I started training camp, then I suffered the injury,” said Kavaliauskas. “I shut down to recover, which was very hard for me. When I fully-recovered, I trained every day. I would do exercises in my living room and the garage. I ran at a nearby park. I only went there when there were no crowds. I avoided people because of social-distancing. Because of all the work I put in, especially recently in the gym, I feel great (going into Saturday’s fight).”

“Egis Klimas is the biggest blessing in my life,” said Kavaliauskas, who is trained by Marcos Contreras. “We became friends, then he brought me to Southern California. God put him at the right time for me. He’s one of the best managers in boxing.”

Kavaliauskas’ wife gave birth to their first child in June. Kavaliauskas admits his newborn gives him added motivation in the gym during training sessions.

The 32-year-old is still a legitimate threat in a very crowded and talented welterweight division. An impressive victory could put him back near the top and in a meaningful fight against another top contender.

Kavaliauskas wants to make a statement at the expense of Zewski and send a message to the top welterweights in the process.

“My plan in the Zewski fight is to dominate and win, whether it’s by knockout or decision. I want to win impressively against Zewski and show what I’m capable of.

“I know I went down in the rankings because of the loss to Crawford. I know I have to climb back up. These guys won’t fight me until I become the No. 1 guy for them to fight. I have to win to become their mandatories. A win over (Zewski) will help put me in that direction,” said Kavaliauskas.

The post Egidijus Kavaliauskas anticipates ‘fireworks’ during clash with Mikael Zewski appeared first on The Ring.