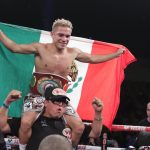 Rashidi “Speedy” Ellis promised to be “too fast and too slick” for Alexis Rocha.

That proved to be the case on Friday as he outpointed Rocha over 12 rounds.

The bout served as the chief support to the middleweight main event featuring former junior middleweight titlist Jaime Munguia taking on Tureano Johnson in a 12-round contest at the Fantasy Springs Resort Casino in Indio, California.

The 23-year-old Rocha suffered his first loss in 17 contests.

In a tooth and nail first round, both fighters had their moments.

Ellis came out strong, connecting with a pair of straight right hands. Rocha then recovered to surprise Ellis with an overhand left, the best punch of the round.

Ellis and Rocha traded smack talk at the start of round two until referee Thomas Taylor warned them to cut it out.

Round three was a dominating one for Ellis. He frustrated Rocha with clean counter shots, including a sharp right hook that stopped Rocha right in his tracks.

Ellis was shoeshining on the outside at the end of the round, backing Rocha up with solid combinations and pot shotting behind the jab.

Rocha, the younger brother of junior featherweight contender Ronny Rios, was warned for multiple low blows in round five. However, Taylor also admonished Ellis for pushing Rocha’s head down, which ultimately led to the low blows.

Rocha then worked exclusively to the body for the remainder of the frame, connecting with a series of lefts and rights downstairs.

But in round seven, Ellis welcomed Rocha to his boxing masterclass. He kept his adversary at bay with a solid jab and countered the southpaw with quick flurries.

Ellis, who accumulated an amateur record of 60-11, was only fighting for the second time in two years. But if there was any sign of inactivity, Ellis sure didn’t exemplify it.

Ellis controlled the pace of round nine, though Rocha found sporadic success to the body.

Rocha attempted to claw his way back into the fight in round 11, but Ellis continued to pierce him with impactful counters.

Sensing he was down on the scorecards, Rocha came out in the 12th and final frame with a sense of urgency.

But Ellis, as he had for the previous 11 rounds, tamed Rocha’s pressure with impeccable timing.

He pot shotted Rocha with the jab and countered with crisp right hooks. Ellis then finished the fight strong, landing with thudding shots to the body as he screamed with every throw.

Elwin Soto’s second defense of his junior flyweight title was a successful one.

Soto landed with a sweeping left hand in round two that got Buitrago’s attention.

For the remainder of the round, Buitrago fought more on the defensive side.

On average, Soto throws about 44 punches a round, preferring accuracy over volume.

That was the case in round three as Soto dictated the pace.

He connected with a combination that backed up Buitrago against the ropes. Soto then followed up with a sharp left hook to the body.

There was a null in the action until round seven when Soto landed with a strong right hand.

Soto landed with a stiff left jab that snapped Buitrago’s head back.

With about 40 seconds remaining in the round, Soto (18-1, 12 knockouts), 23, trapped him against the ropes and connected with a strong right cross.

Soto finished the 12th round strong. He backed up Buitrago with a combination and a left hook to the body.

Soto then subsequently showboated to the final bell.

When she was preparing for the 2012 Olympics, Marlen Esparza was Sulem Urbina’s hero.

The hero shined in the second half of their scheduled eight-round contest to win their WBC 112-pound title eliminator by unanimous decision.

The bout served as the opener to a Golden Boy Promotions card headlined by the 12-round middleweight contest featuring Jaime Munguia taking on Tureano Johnson at the Fantasy Springs Casino in Indio, California.

Judges Rudy Barragan and Dr. Lou Moret scored it a surprisingly wide 80-72, and Chris Migliore had it 78-72, all for Esparza, who won for the first time in 15 months.

Urbina came out firing to the body in the opening frame. Late in the round, the 2012 Olympic bronze medalist Esparza trapped Urbina against the ropes and connected with a few body shots of her own.

In-between rounds, Esparza was warned by referee Raul Caiz Sr. for ignoring his calls to break.

Urbina continued to pressure Esparza in round two as she backed up her opponent with a stiff right hand.

During the round break, Esparza’s trainer and husband Andrew Soto admonished her.

Both ladies bit down on their mouthpieces and connected with a slew of left hooks in a close third round.

Esparza (8-1), 1 KO, 31, of Houston, a 2012 Olympic bronze medalist, who was coming off a nine-round technical decision defeat last November at the hands of undefeated junior flyweight Seniesa Estrada, had a strong fifth round.

She connected with a solid combination, a left hook to the body, followed by a left hook upstairs, with the final shot sending Urbina’s mouthpiece flying from her muzzle.

The sixth round was a clear one for Esparza, who controlled the rhythm of the frame from the outside.

According to Compubox, she landed 22 of 65 punches (34 percent). Her right hand connected with alarming regularity, which caused significant swelling under Urbina’s left eye.

Urbina (12-1, 2 KOs), 30, a Mexico native based in Phoenix, connected with a hard series of right hands that backed up Esparza. Moments later, she pushed her to the canvas, which Caiz Sr. correctly ruled a slip.

Both women slugged it to the finish in an entertaining brawl.