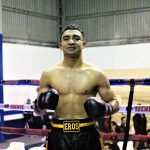 Eros Correa would fill his idle time watching them pass by every day, businessmen toting their briefcases, techies lugging their backpacks, people on their way to somewhere, while the 27-year-old sat there stagnant going nowhere.

Biding his time as a security guard, Correa would daydream about where he wanted to go, because for four years, he had been relegated to waiting as a promising amateur career was met by managerial dead ends.

This Saturday night, Correa’s time will arrive. The junior featherweight, who came up with U.S. standout amateurs Marcus Browne, Jose Ramirez, Caleb Plant, Errol Spence Jr. and JoJo Diaz, will make his network TV debut when he takes on undefeated 24-year-old Henry Arredondo in an eight-rounder.

The fight will be a co-feature under the Amilcar Vidal-Edward “The Hunter” Ortiz middleweight main event that headlines the FS1 PBC Fight Night from the Staples Center in Los Angeles.

Correa (9-0, 7 knockouts) admits the downtime he spent away from the ring was frustrating. He saw everyone he came up with pass by him as their pro careers blossomed, while his was not even getting off the ground.

“There were a few times that I thought that my boxing career wasn’t going anywhere and I thought I would go fulltime with work and give it up,” Correa said. “I always trained super hard. I’m always training. In my mind, I was waiting for something to pop up.”

Bocanegra and Sanchez, who run Cali Boxing, then got Correa a deal with Al Haymon and Premier Boxing Champions and what was looking like a dormant career suddenly received influx of new energy.

Correa made his pro debut in 2017 and Saturday night will mark the second time he’s fighting in 2020.

“Andrew and Jessie have been a huge help,” said Correa, who’s 5-foot-5 and is going to have Bob Santos working his corner this weekend. “I just wanted a chance. Mario was a huge help and I had to start from the ground up.”

Arredondo (7-0, 4 KOs) is a steep challenge. He’s a 5-foot-7 orthodoxed fighter from San Antonio, Texas, who has as much to gain from the exposure as Correa.

“I’ve been committed to the sport and there were times when I put boxing even before my family,” Correa said. “I sit there as a security guard and it’s something I take seriously, but I want my boxing career to begin. I work weekends part time, but I’ve always found time to get to the gym.

“This is very big for me. You do think back to the times when you’re looking around wondering about where I was going. I do have some catching up to do.

“I feel like I’m meant for this. All I wanted, all I needed was a break.”

The post Eros Correa is looking to climb back to relevance appeared first on The Ring.