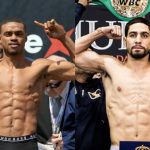 Words roll out of Errol Spence Jr.’s mouth like logs tumbling down a stream. They’re slow, deliberate and forceful.

Spence stressed that he feels no continued damage done by the near-fatal car accident he survived on Saturday morning, October 10, 2019, when he turned over his Ferrari 488 Spider at high speed. Spence (26-0, 21 knockouts) made sure the assembled media knew it was him who picked out Garcia (36-2, 21 KOs) for his first fight back since the accident.

“I feel like I’m 100% physically,” Spence said. “We’ve been training hard and staying focused. I can’t wait to give my hometown fans something to cheer for when I defend my title against a great opponent.

“I didn’t want any tune-up fights. I wanted someone who is tough and who could push me to the limit, so I can get back to being Errol Spence Jr. I’m going to give a great performance and hear ‘and still’ on December 5.

“I picked Danny Garcia so that I could rise to the occasion. I’m still the top dog in the division. Fighting Danny will show how great a fighter I am.”

Garcia knows what he’s up against. He knows not many think he can win, despite the fact that Spence will not have fought in 14 months and seven days.

“I’ve been an underdog my whole career,” Garcia said. “I’m used to playing that role. I just have to go in there and be myself. I have to believe in myself 100% and fight round by round. I’m going to show what a true champion is made of.

“After the (Mikey) Garcia and (Shawn) Porter fights, I saw some holes in his game and I knew it would be a good opportunity to become champion again. These types of fights bring out the best in Danny Garcia. They give me the extra motivation that I need and that’s why I wanted it.”

Derrick James, Spence’s trainer, has said “The Truth” is hitting harder than he ever has in his career.

“Training camp has been really good,” James said. “We’ve been putting in the hard work since March. Everything is coming together leading up to December 5. We took our time and it was a gradual process getting to this point. He was already in shape by the time this camp started so we had a great head start.

“Even when Errol was getting back into his rhythm, he was still looking good. But you could see the improvement day after day as he got more comfortable being back. Everyone will see on December 5 who Errol Spence Jr. really is.”

And, of course, Angel Garcia, Swift’s father and trainer, held nothing back.

“We’re going to dictate the fight and be on top of Errol,” Angel said. “We’re not going to fight like Mikey Garcia did and run all night.

“This time around, we’re not going to leave it in the judges’ hands. We chose to go fight him in Dallas. Danny made that call. At the end of the day, Danny just has to go in there and do his thing.”