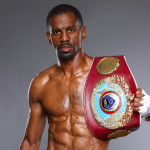 Boxing unfolded at the MGM Bubble in Las Vegas Saturday night, and some of us watched the event on ESPN+ from a different angle than per usual.

I watched the production, and waited to see if analysts Tim Bradley and Andre Ward would be on the Top Rank show, topped by a Egis Kavaliauskas v Mikael Zewski welterweight clash. If yes, would the ex fighters reference the main event from the previous week?

On Sept. 5, WBO 130 pound champion Jamel Herring defended his crown against Jonathan Oquendo. He knocked the 37 year old Oquendo to the mat in round three, but things then got stickier for the Coram, Long Island, NY native. A head butt from the Puerto Rican fighter in round five opened a slice on the right eye of Herring, the Fighting Marine. Blood dripped from the wound, but Herring fought on. He was still ripping shots in round eight, but the fight had tightened up. Then Herring went to his corner, and he was wincing, blinking, and it was clear that right eye was bothering him.

To what extent, only he knows. But analyst Tim Bradley more than implied that the cut wasn’t so severe.

MEMBER WHEN BRADLEY DISSED HERRING BY SAYING HE GAVE UP?

“The problem that I have right here is, ‘real eyes’ realize,” Bradley said on air Sept. 5. “When I saw Herring, frustrated, dealing with those head butts, he wanted out. I gotta tell you that, he wanted out…And that’s the problem I’m having right now, because I’m trying to digest this all right now, and I’m saying, the reason that you can’t see, is because you got blood dripping down in your eye,” Bradley continued. “You can see once they clear that up. To me, I honestly feel like he gave up.”

He said Herring “wanted out,” hello, he called him a quitter. He told viewers that the cut should not have affected Herring the way it did. He interpreted the behavior of Herring, and from that, decided to tell viewers that the warrior Herring did something antithetical to his nature, he surrendered.

Herring is a popular presence on social media, he freely interacts with posters, and doesn’t seek to present himself as above the masses. His willingness to discuss his dark periods boosts his popularity further.

The matter got re-visited on ESPN+ Sept. 12, after a fight pitting Anthony Chavez against Adan Gonzales. We saw some replay footage, of the end of the Herring-Oquendo scrap.

Bernardo Osuna informed people unfamiliar with that stoppage finale more details about how it played out. He tossed to analyst Mark Kriegel, in the building, who did the right thing, as a reporter. The author asked Herring about the ending and the eye, and Herring told him in more detail about how his right eye was feeling, and why. A scratched cornea rendered the eye extremely diminished, Herring told Kriegel, echoing what he’d told me. Osuna, socially distanced from Tim Bradley, then asked the ex fighter if he stands by what he said Sept. 5, after the Herring-Oquendo fight finished in controversial fashion.

Here it is, I bet Bradley will admit that he was out of line in calling Herring a quitter Sept. 5, I thought to myself.

The night of the fight, I stayed up to 5 AM ET, typing up this story for the website, because I had to. They did Herring dirty, was my thinking. But here comes the walkback, I figured.

Oh, to the contrary, in fact….

TIM BRADLEY GIVEN OPPORTUNITY TO BACK-PEDAL, HE GUNS THE ENGINE

“Yes, I still stand by that assessment,” Tim Bradley on ESPN+ told Osuna, who gave him the opportunity to choose his words carefully, after ample thought. “Herring definitely looked for a way out. I know this because I have experience. I experienced this myself, back in 2016. April 9th, I fought Manny Pacquiao for the third time. I was knocked down in the ninth round,” he said, maybe forgetting he got knocked down in round seven as well. “Guess what? After that fight, I checked out, ladies and gentlemen. I checked out. I stopped trying? Did I quit? Did I quit fighting? No, I fought all the way to the end. And shortly after that fight, I had to have a conversation with myself. I had to say, am I willing to go to that dark place needed, needed to sustain to be a world champion. Am I willing to die in the ring, like I said earlier, I’m willing to die if I have to. Am I willing to fight through injury, and pains and aches, whatever it took to get that victory? I said to myself, I’m not willing to go that far. I’m done, and I never returned to that ring again. So I know what I saw,” he said, emphatically, looking into the camera and pointing at the lens. “So I think Herring needs to have a deep conversation, with himself, by himself, and ask himself some serious questions.”

Bradley sought to convince viewers that he was NOT on Sept. 5 casting any aspersion on Herring as a person, simply judging his actions in the ring. It would be for Herring to say, of course, but I’m not going far out on a limb to declare that Bradley’s equivocating was glaringly disingenuous.

The director tossed to Kriegel, who said that Herring told him he has had some deep convos with himself, along the lines of what Bradley referred to. And then they moved on.

I’m not going to, not just yet.

First, I messaged Jamel Herring, asking for an on the record response to Bradley’s Sept. 12 reply when Osuna asked if he stands by his harsh assessment of Herring. I will insert that reponse from Herring if and when it is furnished.

I don’t have a problem standing by my take, which is that Bradley was wrong on Sept. 5, and that he doubled down on dumbness when he said he is confident in his line of thinking, because he stood in Herrings’ shoes. Nonsense, I say. Bradley talked about his April 9 battle against Manny Pacquiao. He told you that he’s confident about his critique of Herring because he was where Herring was. Not so. Bradley came in to the third Pacman fight with an iffier chin, the damage he’d absorbed in the first Pacquiao fight and other contests had taken something from him. The clean blows he ate from Ruslan Provodnikov in their 2013 Fight of the Year proved his toughness but only Fate knows whether that stubbornness will be used against him in ten or twenty years. No, I won’t smear Bradley for being that level of tough vs. Ruslan…But neither will I suggest it’s wise or correct for him to use his own standards on what is an acceptable level of punishment to absorb and apply them to another fighter he’s analyzing.

And yes, Bradley finished the fight against Manny in their third meeting. Point taken–but the comparison is apples and oranges. If a head butt had sliced Tim’s eye, and closed the viewfinder, and he kept fighting, then he could compare and contrast his behavior and Herrings’ more so, if he so chose. He wanted to remind viewers on Sept. 12, maybe, of his laudatory tenure as a prize fighter…But that still doesn’t bolster his bonafides as a 1) mind-reader, or 2) physician. Bradley didn’t know on Sept. 5 what Herring was feeling or thinking, and portrayed otherwise. He also made a critical mistake as an analyst, and that is assuming that what he was seeing told the whole tale.

Author Anais Nin is credited with this adage:

Bradley, and Ward, let’s not let him slide off the hook because he had the night off Sept. 12, ideally took a step back. It would have been satisfying if they’d re-convened, coming from a place of humility, of knowing there were things they didn’t know on Sept. 5.

It’s OK to theorize, to give opinion, but to be so cocksure, as Bradley especially was on Sept. 5 and Sept. 12, towards Jamel Herring, it’s not ideal. We see and hear it all the time in politics, why don’t we aim higher in our own sanctum?

Moving forward, we can see Bradley is married to his take, no need to hope he sees the light. Maybe, then, it might be ideal for Jamel Herring to sit down and talk to Tim Bradley, and they can look each other in the eye. And then, if he chooses, Tim Bradley can look into his eyes and repeat his thoughts on how Jamel Herring behaved on Sept. 5.

–Michael Woods has been a milieu therapist in the locked unit of psychiatric hospital in Massachusetts, filed stories on murders, terror attacks and NYC high school hoops tournaments for NY Newsday in Queens, NY and helped sell your great Aunt in Bridgeport, CT, or was it Bath, Maine a Craftmatic Automatic Adjustable bed. Click his LinkedIn to see his vocational starts and stops

The post ESPN analyst Tim Bradley stands by his critique of Jamel Herring appeared first on The Ring.