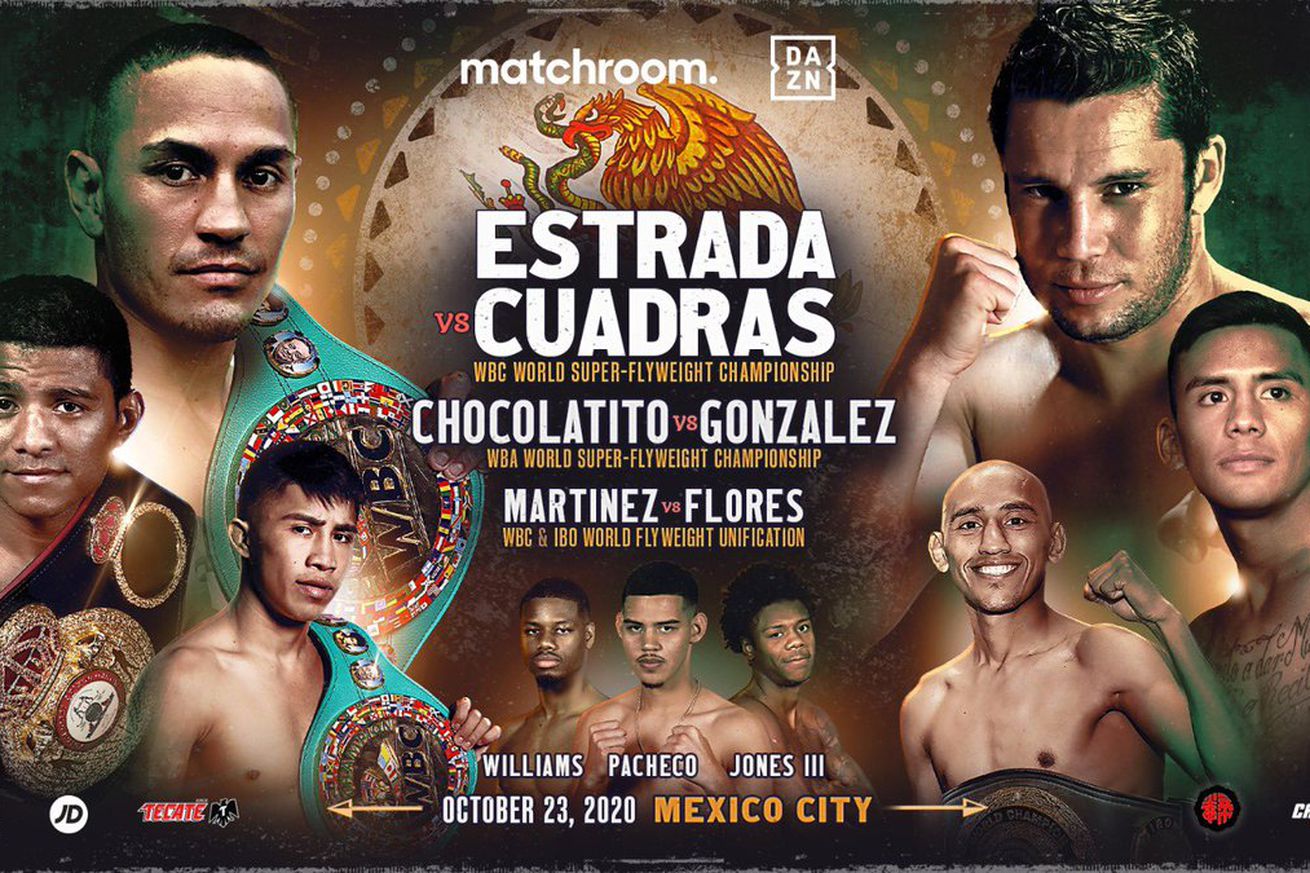 As revealed earlier this month, Mexico City will host a title tripleheader on October 23rd that features some of the country’s strongest champions.

The main event pits WBC super flyweight champ Juan Francisco Estrada (40-3, 27 KO) against Carlos Cuadras (39-3-1, 27 KO) in a rematch three years in the making. Estrada eked out a victory in their first meeting thanks to a late knockdown and has since gone on to establish his place atop the division with a revenge victory over Srisaket Sor Rungvisai, while Cuadras will be making his return to the world stage after a series of tune-ups.

“I am excited to return to the ring,” said Estrada. “it has been tough months for the whole world, and we want to give a great show to all the fans of this sport.

“The first fight against Cuadras was a good fight; without a doubt, this will be too. Also, we are going to share the show Chocolatito and I, and if everything goes well, we hope to see each other again soon.”

“I am going to correct the mistakes that were made in the first fight against Gallo to go out with my hand up in this new opportunity that is being presented to me,” said Cuadras. “I want to show that I am one of the best in this division.”

The previously confirmed co-feature sees Roman “Chocolatito” Gonzalez (49-2, 41 KO) make the first defense of his WBA super flyweight title against fourth-ranked contender Israel Gonzalez (25-3, 11 KO). R. Gonzalez smashed Kal Yafai for the belt in February and was seemingly headed for a fight with mandatory challenger Andrew Moloney, only for the Aussie to lose his belt to Joshua Franco. I. Gonzalez is 2-0 since falling to Yafai in 2018.

“I want to thank God for giving me the strength to endure the sport I love and defend my World title,” said Chocolatito. “I want to thank Eddie Hearn and Matchroom Boxing as well as my family of Teiken. I also want to thank all my fans, especially my Mexican friends and Zanfer promotions for giving me this great opportunity, it is truly a blessing to fight in Mexico, and I am ready to give my all on October 23.”

“It’s a goal of mine beating Chocolatito, especially when the fight is in Mexico,” said Gonzalez. “I feel the compromise of giving a great fight for the fans and for every Mexican fighter that has fought for a World title.”

Should Estrada and Chocolatito emerge victorious, they’re expected to rematch early next year.

The opening and potentially most ludicrous fight is Julio Cesar Martinez (16-1, 12 KO) against Maximino Flores (25-4-2, 17 KO) for the former’s WBC flyweight belt. Martinez claimed the title with a knockout of Cristofer Rosales and successfully overpowered Jay Harris in his first defense. Flores, though unheralded, has some ridiculous output and a knack for producing quality brawls.

“I’ve been preparing very well here with my trainer Mauricio Aceves,” said Martinez. “We have a solid camp. Thank God that I’ve still been able to work out throughout the Pandemic. Either my trainer comes to my house, or I go to his. Either way, I haven’t lost my conditioning.

“Thank God I haven’t been directly affected by the Pandemic. I’ve been able to remain active with running and practical skills with the help of Mauricio. We’re just here putting the final touches on my training, but I’m very confident that my trainer has me in the best shape for this upcoming fight.”

“The whole world will know my name when I beat Martinez,” said Flores. “It is a unique opportunity in my career, and I have to take advantage of it, all my life I have prepared for this moment.”