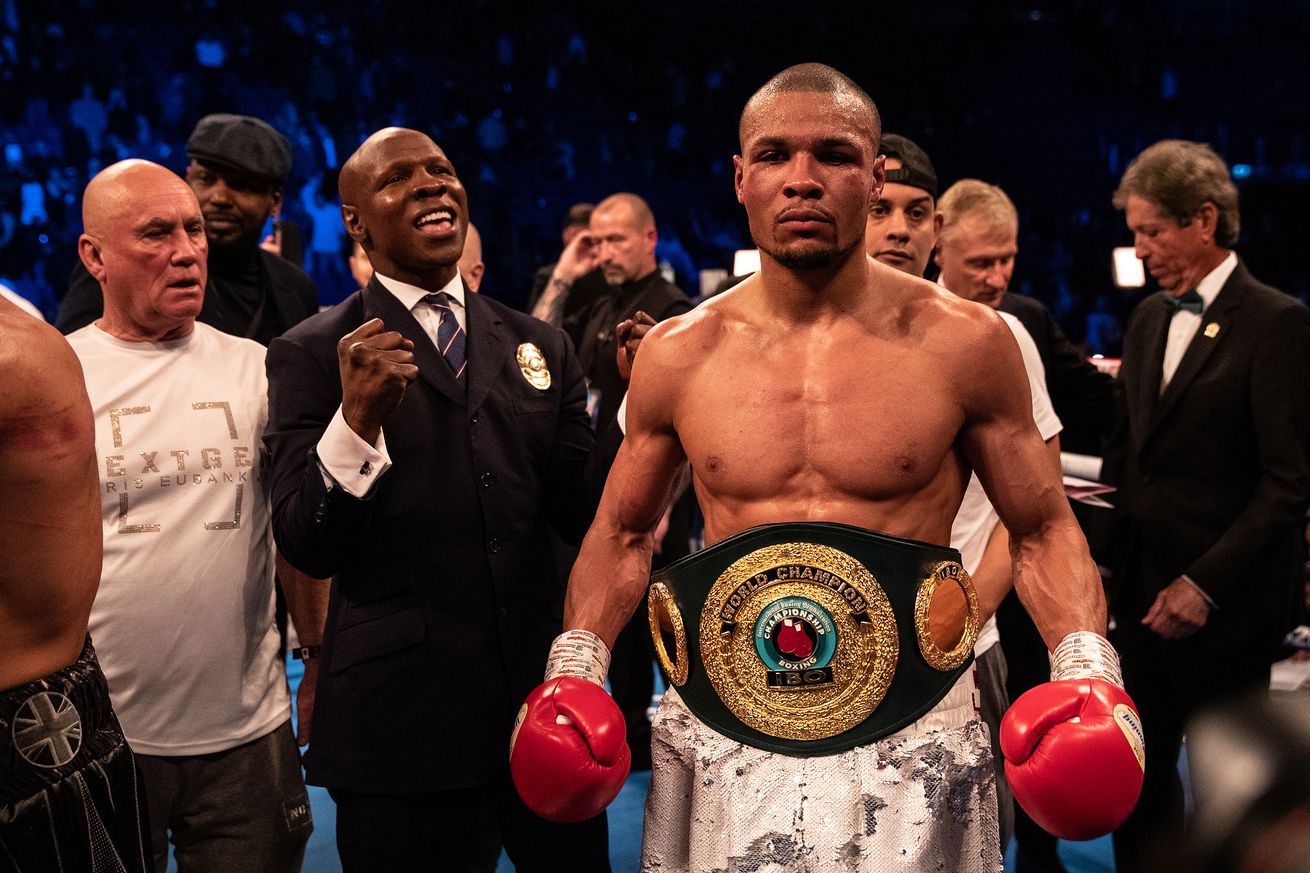 The British fighter has been working with Roy Jones Jr in Florida, and is keeping busy during lockdown.

Middleweight contender Chris Eubank Jr was a guest on the PBC Podcast this week, speaking about his future plans, his work in the gym during COVID-19 lockdown in Florida, and his ideal opponents for big fights in the future.

Eubank (29-2, 22 KO) has been working out with Roy Jones Jr in Florida, as Jones has a private gym on his land where the two can do so safely during the pandemic. But for anyone curious, he stated plainly that he won’t be trying to mimic Jones, as we’ve so many fighters try and fail to do for the last 25 years or so.

“There’s only one Roy Jones Jr. You can’t teach any fighter how he fought, because there’s only one of him,” he said, adding, “In my next fight you’re not going to see me boxing as a replica of Roy Jones. But the little things he teaches you that he used to do in the ring, the small, minute things that you may not even notice or see, those are the things that can add and take you to that next level. I’m excited to get into the ring and have Roy in my corner and see where we can go.”

Eubank last fought in December, scoring a second round injury stoppage win against Matt Korobov. He’s tried to take a level-headed approach to the result that night.

“It was disappointing, that being my US debut, I wanted to make a statement. I wanted to dominate him and put on a show for the American public and the guys who maybe hadn’t seen me, and I wasn’t able to do that,” Eubank said.

“So the fact I was able to just go in there, not get hurt, not get touched, and come away with a win against such an awkward opponent is something that wasn’t a bad thing, really. There’s going to be plenty more opportunities for me to perform and show off my skills against much bigger names, where there will be much more interest. Matt Korobov is not a huge name in the sport, not a lot of people knew him. I’m going to have plenty more opportunities to make a big statement.”

The 30-year-old fighter, originally from the United Kingdom, said there have been no discussions of Korobov getting a rematch.

“He’s not a big name. If he was a big name and everyone was interested, then that’s fair enough, but he’s just a good, solid fighter,” he explained. “He hasn’t got any character. You do a press conference with the guy and he says two words. There’s no excitement. There’s no real reason for me to have a rematch with him.”

Talk then turned to Eubank’s bigger plans, including the potential to fight WBC middleweight titleholder Jermall Charlo, who beat Dennis Hogan on the same night Eubank won against Korobov.

“Any man who’s got a belt in the middleweight division is fully on my radar, and he has one of the belts, so that is definitely a fight I’m looking to get this year, hopefully.”

Eubank says he doesn’t think a lot of the skills or record of Charlo (30-0, 22 KO), which puts him about even with a lot of fight fans who maintain doubts about the 29-year-old Texan.

“Nothing impresses me. He hasn’t fought anybody of note,” Eubank said. “I saw a hell of a lot of weaknesses in his ability when he fought Korobov [in 2018]. That’s a fight that I believe I would win comfortably.”

The second-generation fighter also said again that if he had a choice, he’d be going for even bigger fish in the form of Gennadiy Golovkin or Canelo Alvarez, and he’s confident he could defeat either one of them.

“If you’re gonna ask me what my number one pick would be, it would be a toss-up between Golovkin and Alvarez. I’ve wanted to fight Golovkin for years and I was literally a day or two away from the fight happening, and then it got taken away from me and given to Kell Brook by Eddie Hearn. So that is the fight I would love,” he said.

“And Alvarez, of course; he is probably the biggest name in boxing right now, and I think he’s more than beatable. With my type of style, with my speed, with my punch output, with my fearlessness. I’m not going in there to survive like so many opponents. I’m gonna go in there and meet him head-on. If he wants to scrap, we can scrap. If he wants to box, we can box. I can do it all.”

Eubank said he was supposed to fight again in June or July, but that he hasn’t heard anything specific about when he might be back. He doesn’t sound particularly keen on a high-level fight in an empty venue.

“If you were to fight an Alvarez or a Golovkin, I think you kinda need the crowd. It’s such a huge event,” he said. “Would you really want to do that in an empty building somewhere? It takes away from it a lot. So I don’t know.”

But, he added, if it comes down to it, he’ll do it. He just believes those fights should be held until fans are able to attend again.

“I’ll fight anybody anywhere, it doesn’t matter to me. It’s more for the fans. Those type of fights, the fans deserve to be there. So I would definitely want [an empty venue fight] to be a tune-up fight or an eliminator or something where it’s not like the boxing fans feel like they really missed out. But we’ll see.”