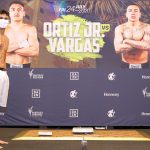 Evan Sanchez didn’t get the knockout he was looking for, but the 22-year-old still won clearly.

Sanchez scored a fourth-round knockdown en route to a unanimous decision victory over a tough, game Issouf Kinda on Friday at Fantasy Springs Casino in Indio, California, to remain unbeaten. The scores were 60-53, 58-55 and 59-54 in the six-round bout, all for Sanchez.

The bout took place on the undercard to the 12-round welterweight contest between Vergil Ortiz Jr. and Samuel Vargas in Golden Boy Promotions’ first card since February.

Sanchez came out firing out of the gate from the southpaw position, connecting with a pair of jabs and a straight left hand. With about 1:35 left in the first round, Sanchez landed a short right hook to the body.

Kinda, who had not fought in nearly three years, tried circling away from Sanchez, but circled towards his strong hand, taking a left hook to the body.

The second round was a competitive one. Sanchez landed a three-punch combination to start tings up Kinda then followed up with a solid overhand right. With :40 left in the frame, Kinda landed with a lunging straight right connect.

About a minute into the round, Sanchez landed with a solid right hook to the body. Kinda caught Sanchez with another overhand right as the bout took a tactical turn in the third frame.

Sanchez dropped Kinda to a knee with a shot behind the head, but referee Ray Corona ruled it a knockdown in the fourth round. Replay footage later showed that Kinda pivoted into the punch, which left him vulnerable to getting hit behind the head.

But Kinda refused to give ground, landing another overhand right and followed up with a straight right. He came up short with an overhand right with about :20 left in the round.

Sanchez (8-0, 6 knockouts), 22, of Parlier, California hunted down Kinda in the fifth round, as the Burkina Faso native was on his bicycle.

With about a minute left in the round, Sanchez connected with a sharp right hand to the body. Kinda then countered him with a counter right down the pipe, and evaded Sanchez’s counter left hook.  At the end of the round, Kinda caught Sanchez with a straight right hand.

About a minute into the sixth round, Sanchez landed with a short left to the body and winced, visibly in pain. Corona then called time with about 1:15 remaining in the frame after an accidental head-butt and warned Corona to watch his head.