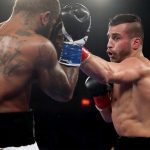 Canadian promotional firm Eye of the Tiger Management has worked tirelessly over the past several months to secure a return to action for its boxers.

“I am very excited about the show on October 10,” Estephan told The Ring. “Finally, after all these months of lobbying to convince the government that we can do boxing safely, we’re there now, we can talk about boxing.”

The show will be headlined by former IBF titleholder David Lemieux, who will face Francy Ntetu, and there will also be a stacked undercard. The gala will be behind closed doors at the Center Gervais Auto in Shawinigan, Quebec, around 100 miles north of Montreal.

“Putting together the plan for the event was very complex in many aspects,” said Estephan. “Be it the protocol of safety versus COVID-19 or finding the fighters and opponents, because the borders are very difficult in these times.

“The matchmaking was quite a puzzling situation, but mainly all the negotiations with the governments, national and regional, for this to happen. So, like I said, we’re very happy that we’re finally there.”

To keep all participants safe and healthy, Estephan had followed strict measures.

“We can talk about boxing. We have three fights that could be three main events for us here in Quebec.”

“David Lemieux has to show that he can bring his power to the super middleweights,” said the promoter. “It’s a big test in front of him. Francy Ntetu has faced Marcus Browne, David Benavidez and Erik Bazinyan. He’s huge, physically, compared to David. I am looking forward to this matchup.”

We also get another chance to see unbeaten Russian Arslanbek Makhmudov (10-0, 10 KOs), who earlier this year signed a co-promotional deal with Golden Boy Promotions, as well as unbeaten 168-pound standout Lexson Mathieu (8-0, 7 KOs).

“Arslanbek Makhmudov, we believe, will be installing fear in the hearts and souls of every single heavyweight on the planet. He will defend his NABF title against Dillon Carman,” confirmed Estephan.

“In the third fight, our young super middleweight protege Lexson Mathieu has a stiff test in front of him in Tim Cronin. He will be fighting for the NABF super middleweight title. If he wins he would become the youngest to ever capture this title, a title that was held by Andre Ward and Québec stars Jean Pascal and Lucian Bute.”

Lemieux-Ntetu, Makhumudov-Carman and Mathieu-Cronin will be available to stream on the Punching Grace web platform and on Indigo, starting at 7:30 p.m.

The post Eye of the Tiger Management returns on Oct. 10 with David Lemieux-Francy Ntetu, Camille Estephan speaks appeared first on The Ring.