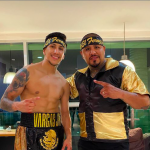 It cannot be close to easy having the name Fernando Vargas Jr, not with your dad being something of a living legend in the boxing sphere.

But it felt to me, in talking to the 24 year old chip off the boxing block, that this young man has his head screwed on pretty straight.

Vargas, now 43 years old, repped the US at the 1996 Olympics, and turned professional, also in Mexico, in March 1997. He picked up the IBF junior middleweight title in downing Yory Boy Campas, and enjoyed defenses against Howard Clarke, Raul Marquez, Winky Wright, Ike Quartey (click here to read what Sports Illustrated thought about that win) and Ross Thompson before taking an L, at the battering hands of Felix Trinidad. He looked to get back to a certain place, gloving up with Oscar De La Hoya in 2002, and had seven more tussles before leaving the stage in 2007 with a 26-5 record.

So no, it wasn’t a case of Junior being right there by dad’s side, and seeing the ebbs and flows of a storied career up close at places like Mandalay Bay, and in those locker rooms where Champagne was sprayed..and also suturing was done, in a funereal atmosphere, as minds drifted to the true toll of taking part in this more savage than sweet science.

“I did basketball, and I’ve always been an athlete,” Fernando Vargas Jr continued. “That was what my dad did, and I never really wanted to do it.” Looks like he has pop in both hands…and we can surmise Fernando Vargas Jr has a certain amount of fighting spirit in his genes.

Cannot blame the young man at all. Just watching the Vargas-Trinidad bout, which went down Dec. 2, 2000, when Feroz went down twice in round one, and three times in the 12th round, that would be enough to convince a son the go into a different business than dads.’

Seeing Oscar De La Hoya hammering dad on Sept. 14, 2002 would maybe dissuade me from trying my hand at pugilism, but Junior was six years old then, and I’m guessing he spends little time on watching night when his dad didn’t triumph. He’s got fighting spirit, he’s from a fighting family, and therefore his fate is probably less subject to which way winds blow than destiny.

So, anyway, how did the seed get planted and watered?

The Vargas crew did a reality show, featuring the ex fighter, looking to cement his vocational place after retiring from ring wars, wife Martha and four kids. On “Welcome To Los Vargas” viewers saw the Vargas clan presiding over a gym in Vegas, and got to know Junior, and Amado (turned 20 on July 20th), more so of a “character,” and Emiliano (age 16, turns 17 April16), who has swept up a b-load of amateur titles.

“I started dropping sparring partners,” Junior recalls of that time period when they were filming for the 2014 series, wearing over-sized gloves, and that was when he started falling hard for the grind. “I knew I was a puncher. Did I know it was for me right from the very start? You really gotta love this thing, you gotta have the right motivation. And I fell in love with the grind. Getting up and running, and sparring.”

Junior is grateful that he wasn’t shoved into it, that Feroz didn’t try to live vicariously, and re-live his triumphs through his son’s exploits. “My dad never did that with me, but he saw me taking it seriously and said, ‘You could really do something!”

He fully understands he’s starting a little late, he doesn’t have that amateur foundation, a couple hundred fights, so he’s still inside the learning curve.

Part of that process is not a rivalry with the brothers; I sensed that when I asked Junior who is the best of the brothers, who all glove up. “We are tight knit, it’s not just my father and mom…it’s uncles, everyone, we’ve been through stuff together. So that’s not just about boxing. And all three of us, who’s best? All of us! But we all fight different.”

All three boys do fight smart, he continued, none are there to take shots in order to inflict punishment on a foe. “People that do that, that tells you they don’t know boxing. ‘Macho’ doesn’t win fights!”

He didn’t sound nervous about his forthcoming debut, which came off successfully Dec. 18. “Hopefully we do take care of business, and however things present themself, if I see an opening, I’ll take it. My time is now! I wanna bring back style, be an action-packed style throwback.”

A boxer-puncher is what you’ll see Dec. 18, he promised. He would go into that fight knowing that, quite likely, whoever he’d be facing will be extra amped. Fernando Vargas Jr looked quite solid in his pro debut, which took place in Mexico on Dec. 18.

“I got a million targets on my back,” Junior said. “That pushes me. And if it gets tough, I can’t expect my dad to help me out. In there, that ring, it’s real. It’s one on one. And if someone can’t really fight, then the business will move on. My dad being who he is, it pushes me.”

The kid, I call him a kid, he’s 24 and a smart 24, seems like he’s living an examined life, and isn’t the son of a celeb who thinks he’s entitled to certain things because of what dad did.

“I remember being in his locker room for the Tito fight,” he told me. And he didn’t have to go deeper. The locker room before, when optimism reigned. And the locker room after, when an oppressive silence spoke loudly, of doubts and fears.

“All in all, I’m excited, the Vargas legacy is in the mix of the top names,” Junior said. “You gotta start somewhere, and here is where I start.”

POSTSCRIPT: Junior didn’t look like a debuter against 2-1 Pablo Rosas at a TV studio in Merida, Yucatan, Mexico.

He looked, for starters, well-sized as a junior middleweight plus (157 3/4 at the weigh-in). In his lefty stance, in round one he started patiently, and offered an educated jab, which was aimed at the body as well as the head of Rosas. His distancing was on message, his pacing looked smart, out of the gate there was lots to like. Junior would get in, get off, and get out. Betcha Rosas didn’t care for the straight lefts to his belly button throughout the first round. In his corner, dad liked how Junior kept the mittens high when Rosas pressed him.

The oldest Vargas boy looked reasonably light on his feet, and his focus was sharp. He’d circle, snap a jab, keep moving. Solid round one.

In round two, we saw Junior have some luck with some shorter shots, as he edged closer, ramping things up incrementally. Then, a straight left after a blinder jab sent Rosas on his butt in the second, with 1:51 to go. His hands were slow, but his willingness of good caliber, Rosas tried to dodge and slip, and kept pressing Junior, even after hitting the mat. But you could see his reflexes slowing, yet he kept working to land a power right. Guess what, once in the first, then again in round two, that Rosas right landed clean when Junior neglected to move that noggin.

Dad liked how Junior was settled in the last minute of round two, however, his breathing stayed steady as he looked for openings on Rosas. Vargas wanted to end things before round two ended, he was loading up with nasty intent late in the round.

And he succeeded, really, because Rosas stayed on his stool, and didn’t stand up for a round three.

Dad got some exercise as he lifted up Junior (1-0 with 1 KO), and held him aloft, as he walked around the ring.

There was no crowd there to shower the offspring with adoration, but I think it’s a safe bet that will come, soon enough. Junior will experience, if he decides to keep at it, advances to tests twice as tough as Rosas, the sweet sounds of the applause that greets pugilists in conquerer mode. And also some of the hurting body and pride that arise when the other guy is a notch better. Life is “feroz,” in that way, for anyone taking the risks in pursuit of the rewards from high level prize-fighting. Looks from here that he is well equipped to handle the inevitable.

Click here to read more about Fernando Vargas the father; he did a Best I Faced with Anson Wainwright.

The post Fernando Vargas Jr could be forgiven if he didn’t want to do boxing appeared first on The Ring.