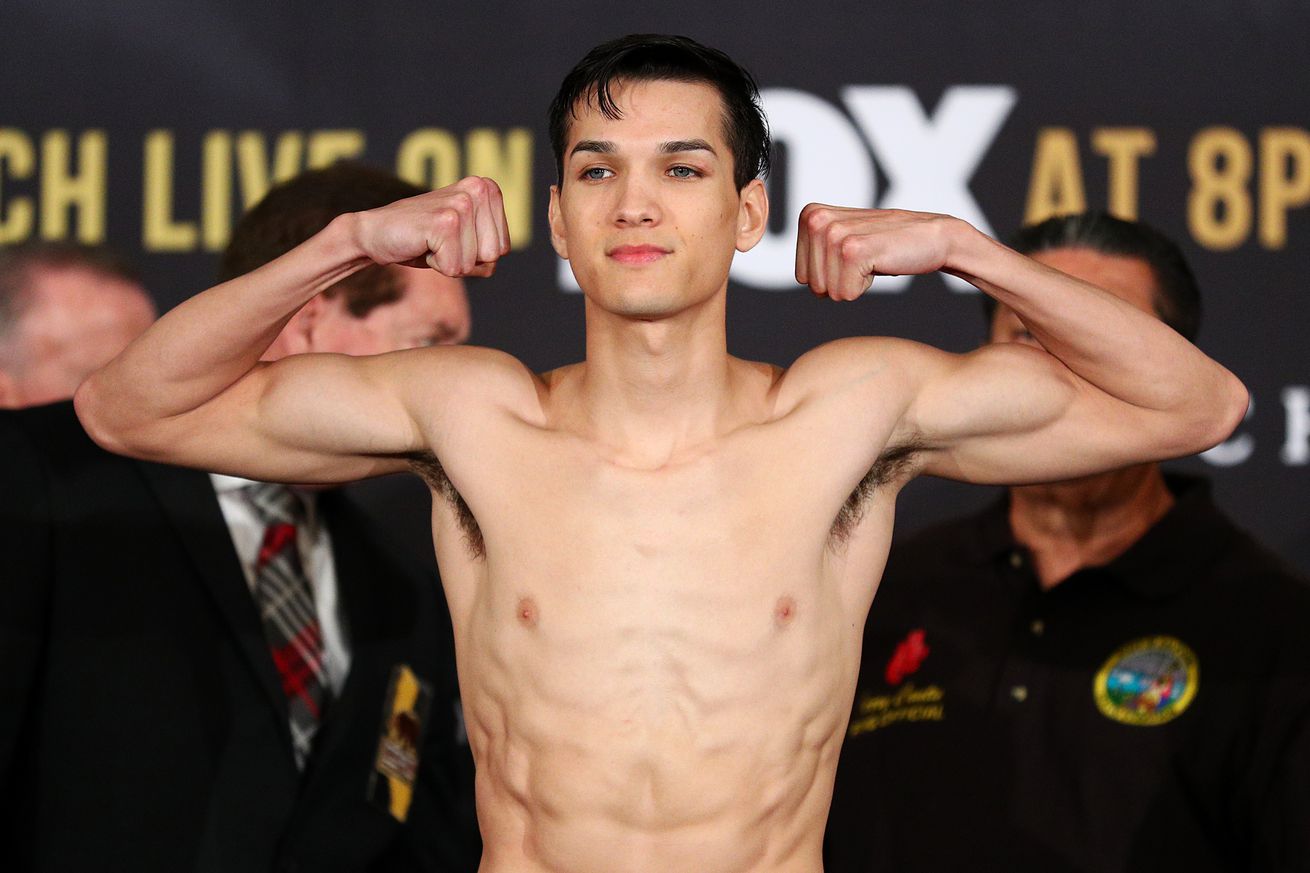 Rising super bantamweight contender Brandon Figueroa was matched with a smaller, much older opponent tonight, and the fight wound up a pretty absurd mismatch, with Figueroa battering Javier Chacon into submission, ending things via fourth round stoppage.

Figueroa (20-0, 15 KO) is a legitimate potential star, a hard-charging fighter with a lot of potential appeal. He brought the fans out tonight in Edinburg, Texas, and they were hyped for his fight — and were a good crowd all night long, for that matter — but it’s hard to say he got a lot out of this matchup, as the 22-year-old “Heartbreaker” just completely overwhelmed the much smaller, 38-year-old Argentine opponent.

Chacon had absolutely nothing for Figueroa in this fight, not throwing much, landing even less, and eating shot after shot. If you can give Chacon anything, it’s that he was tough just for getting out of the first round or two, because he was taking a beating from the get-go. When he finally got dropped on a right uppercut followed by several more shots that came in after, Chacon spit the mouthpiece and gave up, which is quite understandable.

This was a pretty entertaining fight, but it got one-sided starting in the third round, when Fulton (17-0, 8 KO) opened up his offense and just took the game but overmatched Avelar (16-1, 10 KO) to school from that point on.

Avelar, 21, tried to win with aggression, but the 25-year-old Fulton was just clearly more polished, clearly a more well-rounded fighter, and once he got comfortable and had Avelar figured out, the fight was his. He finished things with a wicked shot to the body in the sixth, putting Avelar down for the count. Avelar may wind up being a pretty decent fighter still, but Fulton looks like he’s maturing into a legitimate contender at 122.

After Figueroa’s win in the main event, Fulton returned to the ring and the two both said they’d be up for a fight. That’s a much more interesting matchup than either man had tonight.

“He hasn’t fought nobody like me before,” Fulton said. “This isn’t gonna be easy for him.”

Figueroa said he’d put pressure on against Fulton, but it was hard to hear over the screeching of the fans remaining in the building.

The commentary noted that his long break(s) were due to stints in prison, but he also lost his pro debut in 2:08 those 12 years ago to a guy who would fight one more time, lose, and then never box again, so it’s unlikely we were ever looking at a real boxing talent or anything. But he did come to scrap, which is what really matters, it’s just that Juarez was way better than de la Paz and cleaned his clock. The finish was a looping right hand that de la Paz never saw coming. Juarez is a well-spoken, good-looking young fighter, good on interviews, has skills, some obvious upside as a fighter and potential star.

Super featherweight Arboleda (15-1, 13 KO) punished the body here, dropping Betancourt (26-3, 13 KO) twice and finishing him off in the first round. Mexico’s Betancourt, 28, came in with a pretty empty record, as did Arboleda, a 24-year-old Panamanian.

Arboleda, however, may have something. He was supposedly well out of shape for his lone pro loss, which came in 2017 against Recky Dulay, but he was really sharp here, and he’s now won five straight, all by stoppage. Might be worth keeping tabs on. Can clearly bang, and I’ll keep up with anyone who comes out attacking the body like he did here.