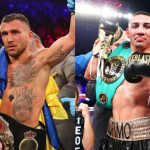 Following a close points loss to Orlando Salido in his second professional outing, Vasiliy Lomachenko has gone from strength to strength. Thirteen straight victories, world titles in three weight classes, Fighter of the Year (2018), pound-for-pound recognition, and he’s now one bout away from lightweight supremacy. Can you think of another fighter who has achieved this much in 15 professional fights? You’ll struggle.

Former WBA lightweight titleholder Anthony Crolla has first-hand experience when it comes to the Ukrainian star’s dominance. Lomachenko was at his sizzling best in scoring a fourth-round knockout over the Manchester man at the Staples Center in Los Angeles in April 2019.

The 33-year-old Crolla had one more bout, a 10-round majority decision win over Frank Urquiaga in November, before announcing his retirement. He now functions as a trainer and analyst, and, like the rest of us, he is absolutely buzzing ahead of the lightweight unification bout between Lomachenko; The Ring Magazine, WBA and WBO titleholder, and IBF counterpart Teofimo Lopez, which takes place this Saturday in Las Vegas.

“The best chance for Lopez to win is for him to land a big shot because he’s a world-class puncher,” Crolla told The Ring. “I just think that it’ll be a combination puncher that gets to Loma, whereas Lopez is always looking for the big punch and the Hollywood finish. But listen, if one of those big punches land, serious questions will be asked.

“He can’t let Lomachenko dictate the pace all the time. Lopez has got to land early and get some respect, and interestingly enough I think Lomachenko is going to come out very aggressive in this fight. There’s been a lot of talk from Lopez and I think Loma feels disrespected by him. So if Lomachenko is aggressive and holds his feet a bit more, then maybe that gives Lopez a chance to land. It’s also important for Lopez to make his size count.” As the natural 135-pounder, the 23-year-old Lopez is the bigger man, and Lomachenko, nine years his senior, could comfortably make 130. But while the American has physicality and youth on his side, it’s Lomachenko who has been there and done it. Asides from his first professional outing, “Hi-Tech” has only engaged in world championship bouts, whereas Lopez has had just one title fight, the second-round destruction of Richard Commey in December.

Team Lopez have dismissed experience as being a factor, but they’re almost alone in that regard.

“A round or so in, I think Lopez is going to say to himself, ‘Oh, it’s very different being in here with him,’” offered Crolla. “I think that’s why Lomachenko is likely to start fast and make him feel it early.

“I really respect the fact that Lopez has taken this fight now because he could have welcomed a [title] defense and bided his time a little. I respect that he’s stepped up, but if you’re advising him you’re probably saying there’s room to improve. He had a good amateur career, but he’s only had 15 fights. Don’t get me wrong, I think Lopez is for real, and when he moves to 140 pounds I can see him winning a world title there, too. He’s chasing greatness here.”

However, despite recognizing Lopez’s star quality, Crolla believes that he’s in over his head, and the bad blood, which has been present throughout the buildup, will bring out the best in his former opponent.

“I think we might see Lomachenko do a bit of the matador stuff that he did against Jason Sosa,” said Crolla. “He’s going to be doing a lot of talking throughout the fight and go out of his way to punish him. He’s spiteful, and I think we’re going to see a Lomachenko masterclass on Saturday.

“Lomachenko will make him miss, and I don’t think Lopez will be hitting arms or gloves, I think he’s be falling short. Any fighter knows how frustrating that is and it will make Lopez take more chances. When that happens I think we’re going to see Lomachenko hit his body and hit it hard. I see Lopez getting stopped on his feet in nine or 10 rounds.”

Lomachenko-Lopez + undercard will be broadcast live on ESPN and ESPN+ in the U.S. and via pay-per-view at www.fite.tv in the U.K.