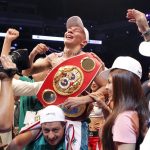 Junior bantamweight contender Francisco Rodriguez would like to face any of the world titleholders in the division. For that to happen, the former IBF strawweight titleholder cannot afford to overlook his next opponent in a stay-busy fight.

On Saturday, Rodriguez faces unbeaten, yet untested, David Barreto at the Auditorio Municipal in Linares, Mexico.

The 10-round bout will air live on Televisa throughout Mexico.

Rodriguez (30-4-1, 21 knockouts), who resides in nearby Monterrey, faced veteran Oswaldo Novoa in his last bout on Apr. 6. Novoa entered the bout winless in his previous eight bouts but acquitted himself well in a very close fight. Rodriguez prevailed via 10-round unanimous decision, all three judges scoring the bout 95-94 in his favor.

The 25-year-old Rodriguez has won his last 11 bouts since losing back-to-back decisions to Filipino fighters Donnie Nietes and Moises Fuentes.

Promoter Oswaldo Kuchle believes the Novoa fight was a blessing in disguise for Rodriguez, who he hopes will be fighting for a world title later this year.

“Francisco wants to be a world champion again,” Kuchle told The Ring Thursday evening. “He’s young, but Francisco is an extraordinary fighter with great qualities. We will take him to a world title fight before the end of the year.”

Barreto (12-0, 12 KOs), who resides in El Tigre, Venezuela, last fought overmatched Marcelo Carrasquel on Apr. 13, stopping him in the opening round. The 25-year-old has only beaten one fighter with a winning record; a first-round knockout of Cesar Paredes on July 28.

Also on the Promociones Del Pueblo card, junior welterweight prospect Lindolfo Delgado returns to his hometown of Linares to face Venezuela’s Eduardo Cordovez in a 10-round bout.

Delgado (9-0, 9 KOs), who represented Mexico at the 2016 Olympic Games in Rio, knocked out James Roach in the opening round of his last bout on Mar. 16. The 24-year-old Delgado is trained by Robert Garcia.

Cordovez (12-0-1, 10 KOs) resides in Los Teques, Venezuela and has won 12 bouts since fighting to a draw against Junior Montoya. Saturday night will mark Cordovez’s eighth fight of 2019.