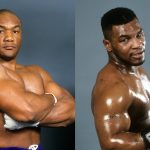 Editor’s note: This feature originally appeared in the October 1990 issue of The Ring Magazine

Although they ascended to the heavyweight throne some 13 years apart, George Foreman and Mike Tyson traveled the same destructive road to the title. Equipped with horrifying power and an aura of invincibility, Foreman and Tyson left a pile of bloody, twitching bodies in their wake. And while each fighter dominated a portion of his decade, both are looking to the future. Suddenly, all roads lead to Tyson vs. Foreman, a showdown between the two most intimidating heavyweight champions in history.

During their respective reigns of terror, Foreman and Tyson tore through the heavyweight division by separating opponents from their senses. After each shattering knockout, the intangible of intimidation grew until it became as much a weapon as a hook or uppercut. Often, their opponents were beaten weeks before fight night. And the reason was simple, Tyson and Foreman epitomized what the heavyweight champion was supposed to be – the baddest man on the planet.

“They’re both very intimidating” said Angelo Dundee, who has trained three heavyweight champions. “At the height of their careers, they looked invincible.” Foreman has always projected a striking image. Whether a 6-foot-4, 220-pound champion or a bald, 260-pound symbol of middle-aged self-assurance, he’s presented his opponents with a huge specimen to negotiate. Aside from his appearance, and the fact that he is now a reverend, little else has changed. He is still a plodding, emotionless puncher who confidently pursues his prey with the knowledge that his clubbing blows will ultimately crush their resolve.

In contrast, Tyson wreaks havoc with a menacing scowl that is straight from the nasty side of Brooklyn. Unlike the subdued Foreman, Tyson approaches his fights with the mentality of a streetfighter and the aggressiveness and fury of a rabid dog.

“Iron” Mike has made both casual and hardcore fans cringe with vivid descriptions of what he intends to accomplish with his punches.

“I try to catch him on the tip of the nose because I try to punch the bone onto his brain,” he said after knocking out Jesse Ferguson in 1986.

Foreman was far less quotable during his 21-month championship tenure than he is now, but his words were equally chilling.

“I was one step away from putting my foot on the man’s chest,” Foreman said of his fifth-round knockout of Joe Frazier in 1976. “I thought if I killed a man, it would only make me more vicious.”

In 100 years of heavyweight champions, only Sonny Liston inspired the fear that Foreman and Tyson demanded. Boxing experts saw them as unbeatable. And little, if any, argument was made when it was suggested, “It will be years before there’s a new champion…”

What does it take to stop the schoolyard bully from picking on the mild-mannered bookworm? How about a bigger bully? While that usually works, it is only a temporary solution. Every bully worth his sneer will continue to use fear as leverage. But when the potential victim stands to fight, the bully has lost half his edge. He becomes a lion without a roar.

When Tyson and Foreman were roaring, most of their opponents could not physically match them. And the few that could often had their advantages nullified after taxing pre-fight rounds of psychological warfare.

In 1987, James “Bonecrusher” Smith, a well-proportioned, 6-foot-4 heavyweight with a booming right hand, was so intimidated by Tyson that instead of fighting, he held and grabbed for 12 ludicrous rounds. Smith lost the WBA heavyweight crown but gained a new nickname – Boneclutcher.

But against Foreman and Tyson, respectively, Muhammad Ali and Buster Douglas entered the ring without fear and, as a direct result, exited as world champions. Rather than being paralyzed with fright, they were energized by a purpose. They fought to win, not to survive.

“I fear no man,” Douglas said after beating Tyson. “For once Tyson was fighting a guy who wasn’t afraid of him.” Foreman knows the feeling. After being kayoed by Ali, Big George never regained his frightening image. Stripped of his invincibility, Foreman’s first career ended in 1977 after a rather meek Jimmy Young staged a late rally – culminated by a 12th-round knockdown – to win a shocking 12-round decision. With the memories of his losses to Ali and Young readily available in his consciousness, Foreman, older, wiser, and 22-0 in his second career, understands the pressures that now confront Tyson.

“Mike Tyson will never sleep again until he redeems himself,” Foreman said. “But it doesn’t happen until you get that title back.”

Co-promoters Bob Arum and Don King hope that Tyson and Foreman will headline one more doubleheader and then face each other, with the winner getting a shot at the heavyweight title. But such a title fight may be someone anticlimactic. The real fight, and the only fight in the heavyweight division that fans want to see, is Tyson-Foreman. It has become the most anticipated heavyweight matchup since Larry Holmes-Gerry Cooney in 1982.

“It’s one of the biggest fights in the world,” said Al Braverman, the director of boxing for Don King Productions. “What f______ excitement.”

But don’t confuse Tyson-Foreman with a sporting event. Or even a boxing match. It is pure violence.

In a combined 108 fights, the two have heard the judges’ scores only nine times. Among heavyweight champions, Foreman ranks first (91.3) and Tyson third (87.2) in knockout percentage. Brought together in the same ring, Tyson and Foreman should generate enough power to energize most third-world countries.

Presumably, a fighter like Jaco, who has been a steppingstone for Alex Stewart, Tommy Morrison, Douglas, and Tony Tucker, would fear no one. But he admitted there was some apprehension before facing Foreman and Tyson.

“When I fought both of them, I was a fill-in,” he said. “I guess you could say there was a little nervousness about facing two guys that are known for putting people to sleep. There was a little fright going into those fights.” Prime Tyson (right) open up on Tyrell Biggs. Photo from The Ring archive

There doesn’t figure to be any fright before a Foreman-Tyson fight, but Jaco doesn’t think Big George will be able to cope with Tyson’s blend of speed and power.

“The honest truth,” he said. “I don’t think Foreman has a prayer against Tyson. I don’t see him going five rounds. I believe Foreman can hurt Mike Tyson, but I don’t see him being quick enough.”

But Dundee, who’s worked on the opposite corners of both fighters, doesn’t see Tyson as an easy winner.

“George Foreman has always been awesome against short guys,” Dundee said. “Joe Frazier at his best couldn’t deal with him. He’s a hard guy to reach. It’s gonna take a big man to beat him.”

Foreman, who scaled 263 pounds against Adilson Rodrigues, will have a considerable height and reach advantage over Tyson. And while mobility played an important part in Douglas’ win over Tyson, Buster’s size and strength also figured prominently in the shocking upset.

“Adilson told me that he blocked a left hook [from Foreman] and it almost took his arm with him,” Dundee said. “I definitely think that Foreman will beat Tyson. He’ll knock him out.”

A knockout is all but guaranteed. When and by whom, though, will remain hot conversation until Tyson and Foreman climb into the same ring – at the same time. “Let’s cut all this nonsense out,” Reverend George said after knocking out Rodrigues. “Let’s get George Foreman and Mike Tyson together once and for all.”

“Iron” Mike Tyson will be the subject of a forthcoming Special Edition of Ring Magazine. There’s no better time to subscribe to “The Bible of Boxing”

The post From The Archive: Can ‘Iron’ Mike Tyson stop the blast from the past – George Foreman? appeared first on The Ring.