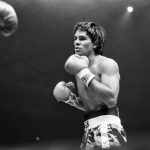 Editor’s Note: This fight report originally appeared in the April 1978 issue of The Ring Magazine. The bout took place on January 21 of that year.

The “Hands of Stone” struck again as Roberto Duran emerged the undisputed world lightweight champion in his battle against Esteban De Jesus at Caesars Palace in Las Vegas with a KO at 2:32 of the 12th round.

Duran, the WBA champion from Panama, and DeJesus, the WBC champion from Puerto Rico, met for the third time on a Don King-promoted show which was aptly called “The Combat Zone.”

DeJesus at 134, and Duran 134 ½ , are long-time enemies. The two started their battle on Saturday at the early morning weigh-in, when DeJesus took a swing at his opponent, and Duran countered with an attempted blow that was stopped by his trainers.

Their mutual hatred was evident from the opening bell of the title fight. DeJesus came out swinging, jabbing and hitting. Duran played a waiting game in the early rounds – a game that proved his mettle as world champion.

DeJesus took the early rounds as Duran circled around the ring, countering with some vicious jabs to the body and head. DeJesus was staggered briefly when Duran pinned him against the ropes in the second round.

The third round saw the beginning of an all-out brawl as DeJesus worked to Duran’s head and the Panamanian countered with brutal body blows.

DeJesus, who was smiling and confident through the third round, became disorientated from the fourth round on. The former WBC champion suffered from a lack of timing. Numerous swings to Duran’s head and body missed their target. Esteban began to wear down in the fourth round as he attempted to dance away from Duran’s battering.

DeJesus revived in the fifth round and managed some stunning rights to his opponent’s head. Duran countered with brutal blows to the body, and the round ended with a wild exchange of punches against the ropes.

The latter rounds were all Duran’s, and the worldwide boxing audience began to see the handwriting on the wall. DeJesus tried vainly to put his opponent away, but the crafty Duran proved to be quicker, stronger and smarter. Esteban’s punches became ineffective, his attempted jabs to Duran’s head were badly timed and his coordination was completely lost.

Although DeJesus managed some good shots to the head in the 11th round, Duran had taken complete command and the end was in sight.

Duran proved his name “Hands of Stone” in the 12th round, as he knocked DeJesus down in the opening moments and then unleashed his famous right hook for the final knockout.

The bad blood between the two fighters boiled again after Duran’s victory when a post-fight battle erupted between Roberto and Esteban’s younger brother. The fight as quickly stopped by both corners, as hundreds of Panamanians who had flown to Las Vegas to witness the fight swarmed into the ring to cheer their national hero.

A smiling, unusually mellow Duran met the press along with his interpreter and stated: “I could have knocked him out earlier, but I felt that I must fight cautiously because I have not fought for a long time before today. DeJesus was best in the early rounds, but after that I was able to make him miss a lot. In the 12th round he left me an opening, and that’s when I gave him the surprise I had planned.

“I knew I would win,” concluded the champion. “They do not call me ‘Hands of Stone’ for nothing!”

A tearful DeJesus was unable to meet the press, however, in a private talk with your Ring reporter, he stated simply: “He had a tougher punch than I expected. The whole fight was nothing like I had expected.”

The post From the archive: Roberto Duran becomes undisputed lightweight champ, knocks out Esteban DeJesus in 12 appeared first on The Ring.