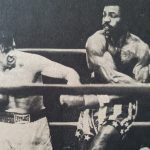 Editor’s Note: This review originally appeared in the April 1977 issue of The Ring Magazine.

When was the last time you came away from a movie feeling good?

The story may not rate A for credibility, but it works so well that you don’t mind at all. Rocky, played to perfection by Sylvester Stallone, who wrote the script with himself in mind for the part, is a third-rate Philadelphia club fighter without an impressive past and a less certain future. (“Why do you want to fight?” he is asked, to which he replies, “Because I can’t sing or dance.”) That opening scene, by the way is a beauty. The camera homes in on a gaunt, gilded Christ, then moves slowly down to the ring, the punchy fighters, and the razzing spectators seated on folding chairs. That is our introduction to Rocky. Sixty-five dollars for that victory, less fees for locker, shower and tax is his take home for the night.

From there we follow him to a squalid neighborhood where he shares quarters with some goldfish and a pair of turtles. We see him on his rounds as a small-time collector for the Mafia, on to the working gymnasium where he where he finds his locker has been emptied, his belongings bagged and hung on “skid row” to make room for a promising young comer. Things look pretty bleak. But even at this point we see the unquenchable optimism, the fierce determination, and with it, the sensitivity and compassion of this likable young man.

Out of the blue comes the opportunity for Rocky to make it big. Apollo Creed, played by former Oakland Raider Carl Weathers, is heavyweight super-champ, cast in the mold of a Muhammad Ali figure. His opponent for a scheduled “Bicentennial Super-Battle” has suffered an injury and Creed is at a loss for a replacement. He conceives the idea of finding an unknown and giving him a chance for a shot at the title. What could be more American? Or more smart?

From a book which must be none other than The Ring Boxing Encyclopedia and Record Book, Apollo gleefully pounces upon the name of Rocky Balboa, “The Italian Stallion,” because the name appeals to him (Rocky said he thought it up one night when he was eating), and figures such a one would suit his requirements admirably. Rocky, dazzled, falls for the publicity stunt, but proceeds to take matters seriously and sets about training furiously for the glory within his reach.

Shivering with him, we watch him rise at a chilly 4 a.m., down six raw eggs (we gag), and emerge into the 28 degree Philadelphia pre-dawn streets for his roadwork. He circles, jabs, and pants up the stone steps to survey the paling city before him. As fight night nears, he no longer pants, and performs a victory jig atop the plaza. By this time we’re cheering him to a man. Rocky is all ours now, and we hurt when he hurts, shrink at the “cheap shots” or put downs thrown at him, feel the pride of achievement in his growth.

“Attaboy,” we whisper in the dark as he pounds away with his fists at sides of beef in a meat packing plant. There are tender moments, too, with his girl, a painfully shy pet shop attendant, beautifully and perceptively played by Talia Shire, and some expressive scenes with his trainer, Mickey, who does an about-face from dumping Rocky to latching on to his coat tails for the recognition Mickey has never had. Old pro Burgess Meredith gives it the right tough.

As all good fight film fans know, the Big Night must finally arrive. The entrance scene at the arena is one of the most delightful spoofs contrived. After Rocky climbs into the ring wearing his new robe, donated by, and labelled by the meat packing company, Apollo Creed and his entourage make their entrance in a dazzle of pageantry outdoing you-know-whom. The fight itself will satisfy the most demanding ring fan. Four cameras follow Weathers and Stallone as they play their carefully choreographed parts, blow by blow. The fight is completely credible, realistic, brutal and emotional as Rocky stands flatfooted and takes on his formidable opponent. If you don’t already know what happens, I won’t tell you. Suffice to say, the audience is left limp and breathless at the finish.

You probably have heard how Stallone put his script on paper in three-and-a-half days after some months of incubation, inspired by the actual fight between Muhammad Ali and Chuck Wepner. You probably also know that he refused to sell it unless he could play Rocky, finally gained his point, and went on to smashing success.

Although he has never been in the ring, Stallone took his training as seriously as Rocky himself, starting with early morning jogs and following with extensive gym training under Jimmy Gambino, former fighter-trainer who plays the part of Mikey in the film and serves as technical director.

Director John G. Avildsen was responsible for the atmosphere of authenticity throughout the picture, from the Philadelphia tenement areas and seedy gyms to the Spectrum where The Fight took place. Joe Frazier, by the way, makes a guest appearance.

Stallone was worried about Butkus.

“He’ll always have trouble with the dialogue,” Stallone told one reporter. He needn’t have worried. Butkus didn’t.

The post From the archive: The Ring reviews Rocky before Oscar night 1977 appeared first on The Ring.