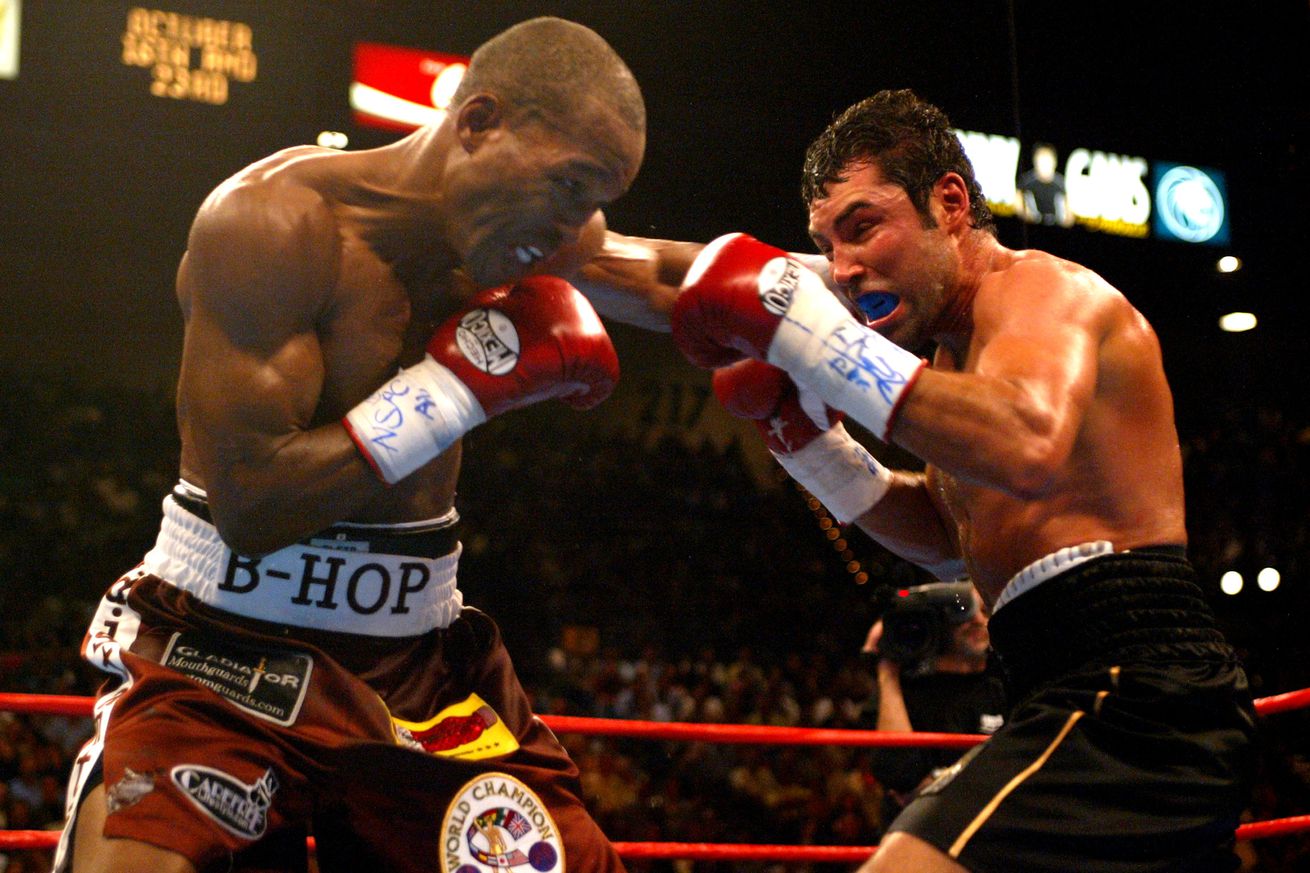 A questionable middleweight matchup featured a conclusive finish in 2004.

Oscar De La Hoya probably shouldn’t have been in the ring with Bernard Hopkins.

The top middleweight Hopkins had the WBC, IBF, and WBA middleweight titles, and was the recognized LINEAL!!! champion of the division, too. He’d held at least one middleweight title since claiming the IBF belt in 1995, and had won 18 straight fights, having not lost since Roy Jones Jr beat him in 1993.

“The Executioner” was the man at 160, taking down all comers, including a notable 2001 win over Felix “Tito” Trinidad. He was also a natural middleweight.

De La Hoya, on the other hand, was not. But a deal was set in place. First, Hopkins had to beat Robert Allen on June 5, which he did quite handily. And that same night, De La Hoya would have to take the WBO belt from Felix Sturm. He did, but not handily at all; in fact, many felt then and feel now that De La Hoya was gifted the decision in order to save the money fight with Hopkins.

Sturm, frankly, had shown that De La Hoya was simply not a middleweight. It’s not that he blew Oscar out or anything, but Sturm really shouldn’t have been able to have that good an argument if Oscar could really fight at 160.

Three months later, we ended the questions about Oscar’s middleweight credentials in the fight with B-Hop. The 39-year-old Hopkins (44-2-1, 31 KO coming in) didn’t look to overwhelm the 31-year-old De La Hoya (37-3, 29 KO coming in), but he was rather handily ahead after eight rounds — or he was on the two cards that reflected the fight, where he led 78-74 and 79-73. Judge Keith MacDonald somehow managed to have De La Hoya ahead 77-75, which was ridiculous.

In the ninth round, Hopkins put an end to the fight, sending “The Golden Boy” to the canvas, crumpled in a heap, the result of a laser-like left hook to the body. To Oscar’s credit, he tried to get up, but it just wasn’t happening.

De La Hoya would take 20 months off before returning, coming back at 154 pounds in 2006 for a get-well win over Ricardo Mayorga. In all, he went 2-2 after the Hopkins fight, beating Mayorga and Steve Forbes, with losses to Floyd Mayweather and Manny Pacquiao.

Hopkins, nearing 40, figured to be reaching the end of his line. And after a win over Howard Eastman in Feb. 2005, he lost the undisputed crown to Jermain Taylor in July 2005, via split decision. He dropped the rematch in Dec. 2005, too, and it appeared maybe he was done.

He wasn’t, of course. He jumped two divisions to 175 and dominated Antonio Tarver in 2006, and, well, it’d take longer than we need right now to go over Bernard’s “second career,” as it were. But he was fighting and winning until 2014, when he unified the WBA and IBF light heavyweight titles with a win over Beibut Shumenov. Sergey Kovalev and Joe Smith Jr finally sent him out of the sport with losses in 2014 and 2016, but by then Hopkins was playing with house money. He’d long since had nothing to prove.