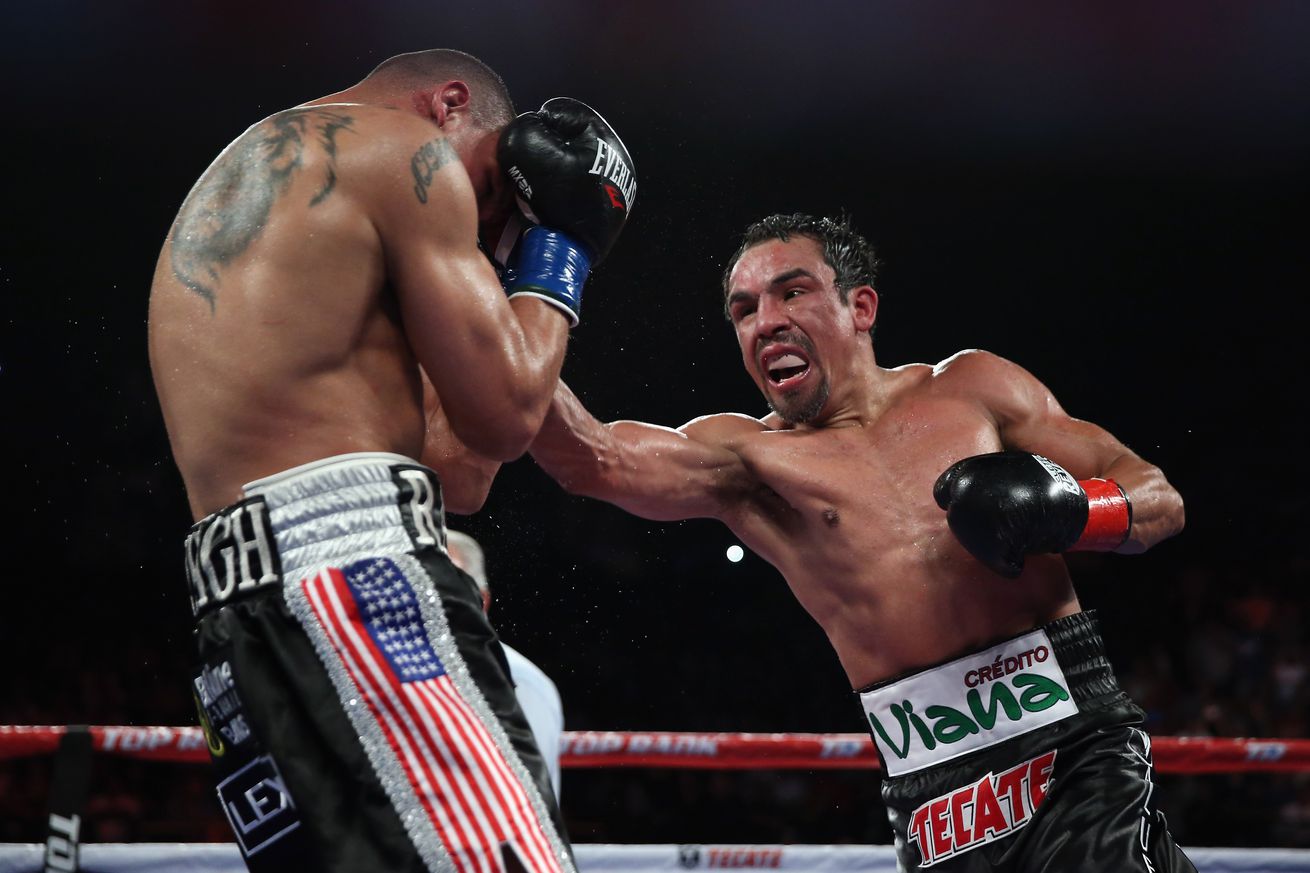 Juan Manuel Marquez clearly had something left in the tank, but he went out with a win six years ago today.

For much of his career, Juan Manuel Marquez was sort of “the other guy.” He wasn’t Marco Antonio Barrera, and he wasn’t Erik Morales, the two great Mexican stars around his weight classes for years.

But as great as Morales and Barrera were, and as popular as they were, Marquez may have been the best fighter of the trio. He’d lost his pro debut in 1993 via disqualification, and he lost a featherweight title shot against Freddie Norwood in 1999. But in 2004, when he came off the canvas three times in the first round to battle Manny Pacquiao to a draw, it was clear the type of fighter he was: skilled, yes, and also incredibly determined, and not afraid to mix it up if he had to mix it up.

The Pacquiao-Marquez series has gone down in history as one of boxing’s great rivalries. The controversial draw in 2004, two controversial Pacquiao wins in 2008 and 2011, and then the emphatic Marquez knockout win in 2012. Their names are forever linked, but Marquez had a lot of other big nights, too — a 2007 win over Marco Antonio Barrera when those two finally met, an underrated 2008 battle with the great Cuban Joel Casamayor, a 2009 Fight of the Year win over Juan Diaz, his loss to Floyd Mayweather that same year, a hard battle with Michael Katsidis in 2010, and a split decision loss to Timothy Bradley Jr in 2013.

By the time Marquez finally got his win over Manny, he was 39 years old, fighting well over his best weights. He was 40 when Bradley got the duke against him. And though there was certainly money in a fifth Pacquiao fight, Marquez had little interest. To him, that story was closed.

Alvarado (34-2, 23 KO coming in) was 33 years old but had been through the battles in and out of the ring in his life. He was coming off of three really hard fights, two with Brandon Rios (they split the results) and one with Ruslan Provodnikov where the hard-charging Alvarado had started to look a little worn out.

Marquez (55-7-1, 40 K coming in) was also looking to rebound from defeat to Bradley and needed an opponent, and Alvarado fit the bill. He was credible but had been looking vulnerable, and with a win, Marquez could set up another big fight if he wanted.

The fight wound up being entertaining if largely one-sided, with both men hitting the canvas. Marquez was able to outclass Alvarado clearly in the first half, and got a bit more aggressive over the second half. He was on old stomping grounds at The Forum, bringing boxing back to the renovated Los Angeles area venue that had helped him break through in the United States in the 1990s. For his career, Marquez was 12-0 at the venue.

Ultimately, it wound up being the final fight Marquez would ever have. There remained talk of a fifth Pacquiao fight, but a deal too good to turn down never came the Mexican’s way. He negotiated in 2016 for what would have been a big Mexico vs Puerto Rico fight with Miguel Cotto, but they couldn’t agree on a weight. He returned to training in 2017, but recognized that his body wasn’t holding up anymore. Instead of pressing his luck, he officially retired that August at the age of 44, over three years after his final fight.

Alvarado, meanwhile, would fight on. He did a trilogy bout in Jan. 2015 against Brandon Rios, and looked a pale imitation of his former self, dropping his third straight fight, this time by stoppage after three rounds. After 14 months out, he started a comeback in 2016, taking lower-level fights and putting together a six-fight win streak. Top Rank gave him another legitimate crack in April of last year, but Alvarado was stopped in the third round by prospect Arnold Barboza Jr, and hasn’t fought since.