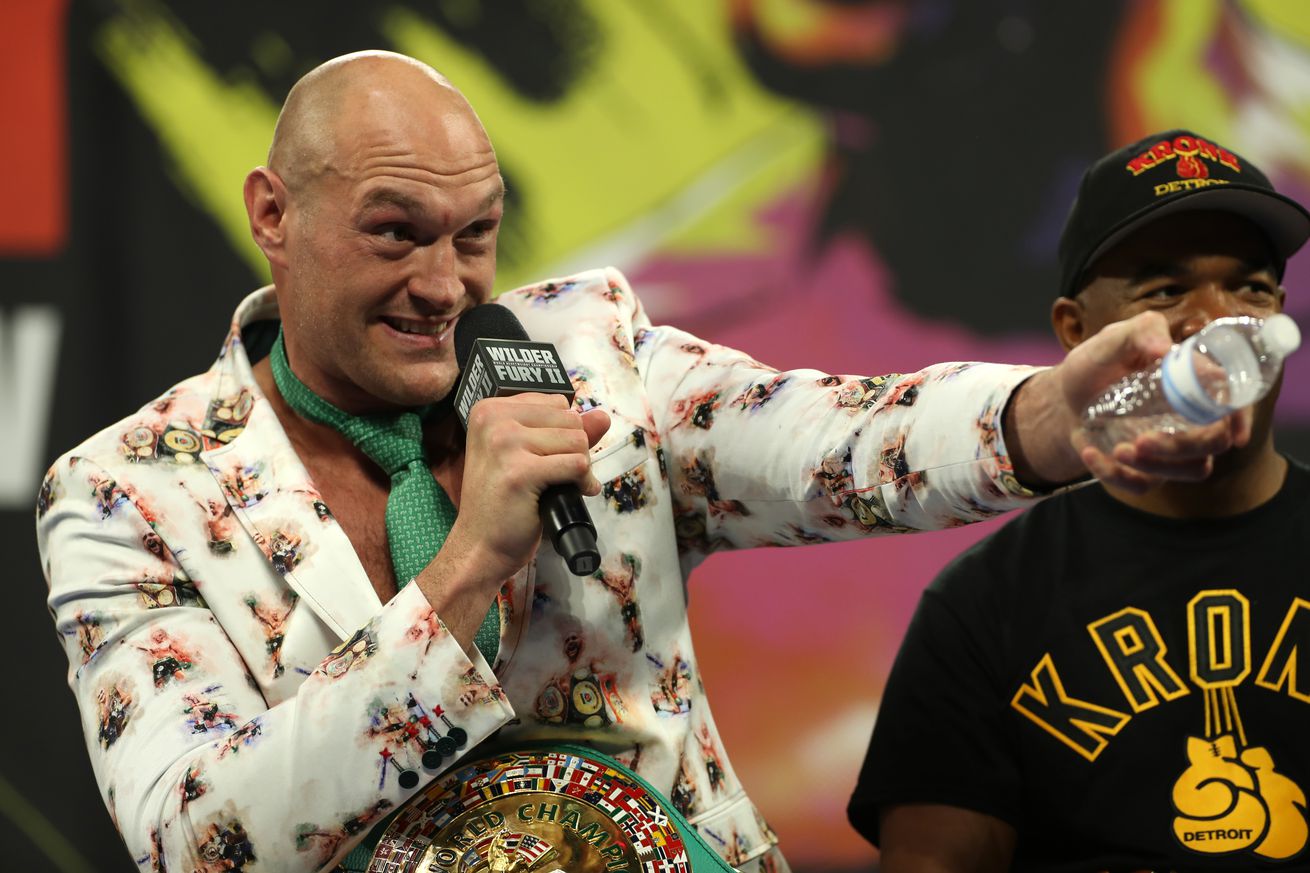 Tyson Fury feels that if Deontay Wilder doesn’t step up for their contractually-obligated third fight soon, he and Anthony Joshua should fight in an undisputed heavyweight title bout.

Fury (30-0-1, 21 KO) holds the WBC title and is recognized by those who care as the lineal champion of the division, while Joshua (23-1, 21 KO) has the WBA, IBF, and WBO belts. A while back the two reportedly came to terms on a two-fight deal, but it had a lot of roadblocks in the way that had to be taken care of first.

One of those roadblocks, Dillian Whyte, is no longer guaranteed a WBC title shot in early 2021 after his stunning loss to Alexander Povetkin on Aug. 22. And Wilder really doesn’t seem in any rush to get to a third fight with Fury, which Wilder exercised the option for after Fury stopped him to take the WBC belt in February.

Joshua, of course, still has an IBF mandatory in Kubrat Pulev, and that fight is signed. Pulev has stated repeatedly, too, that he will not be accepting step-aside money, but you have to wonder if there might be a way here. Fury and Pulev are both Top Rank fighters (Fury is co-promoted with Queensberry), and Fury-Joshua is obviously a much bigger fight than Fury-Pulev.

“I said to AJ, I said to Eddie Hearn, grow a pair, come sit down at the table, and let’s get it signed,” Fury said on BT Sport yesterday.

“I’m number one in the division, lineal champion, Ring Magazine champion, WBC champion, only undefeated world champion out there at the moment. So you know what time it is, you know where to come and see me. Make it happen.”

Of course, getting Fury-Joshua done would have a lot of the same problems every other big fight has now: where do you put it, and how do you pay for it? Fury is not some pay-per-view mega-star in the United States, and Joshua has never fought on pay-per-view in the United States. Without a paying audience, you’re leaning really heavily on PPV sales, the bulk of that money coming from the US.

But it’s all really just talk at this point, anyway. There are huge logistical issues, though, and they should be noted. This isn’t as simple as “Fury called him out so now Joshua must fight him.”

Fury also didn’t miss an opportunity to take a little shot at Joshua for losing to Andy Ruiz Jr in 2019.

“What’s the worst can happen, you can lose a boxing fight? Big issue. You’ve already lost before, mush, so don’t worry about it.”