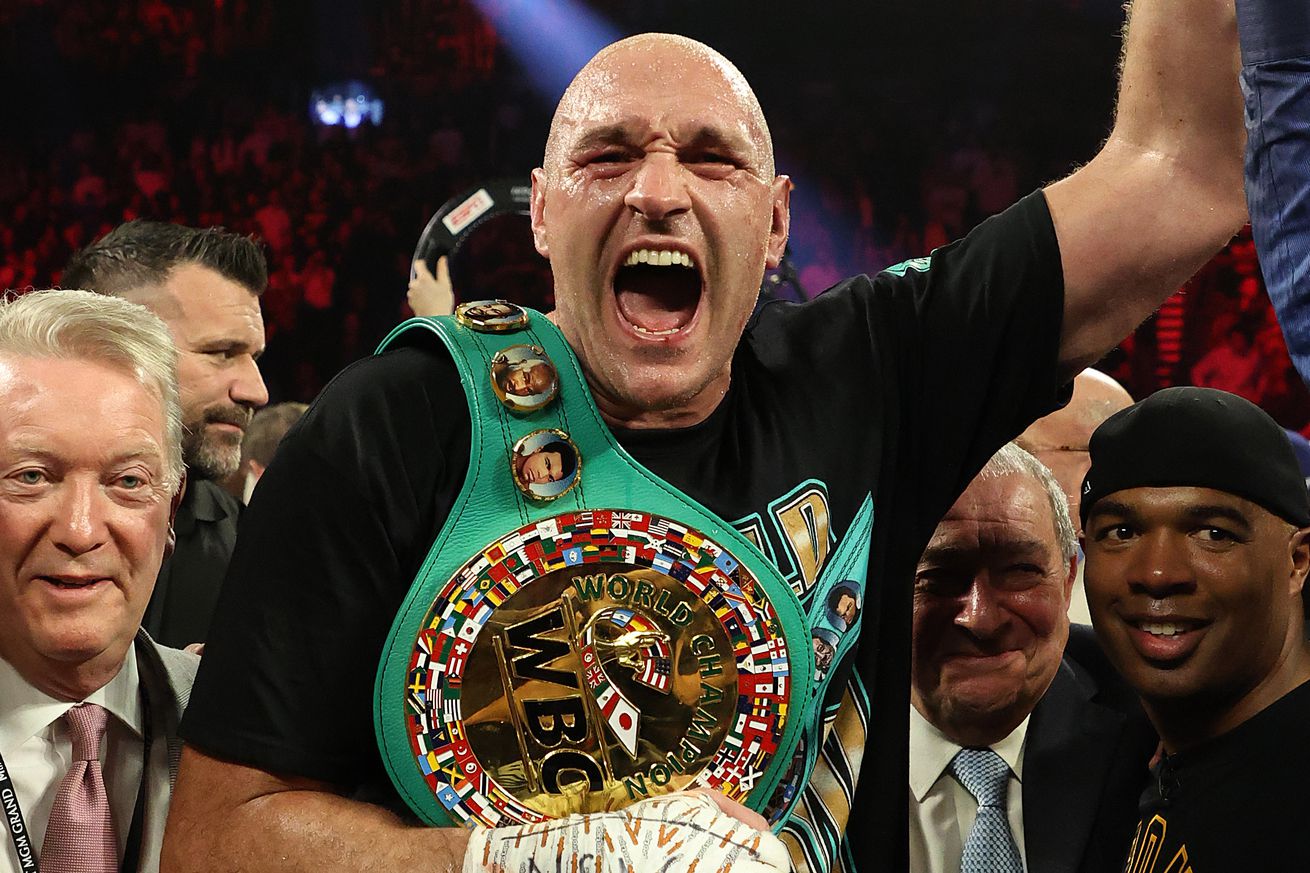 Tyson Fury has an idea: Anthony Joshua should vacate any belts that might delay a fight between the two of them.

Tyson Fury sat down with Michelle Joy Phelps and Behind the Gloves, and the result was the usual freewheeling sort of interview that Phelps usually gets from Fury, covering a wide variety of topics in and out of the ring.

Most interesting, perhaps, is finding out for sure what you might have expected: Tyson Fury is not particularly compelled by fighting for belts, and while he wants to fight Anthony Joshua, he doesn’t care if it’s for the undisputed heavyweight championship or not.

In fact, in order to speed up the process, Fury (30-0-1, 21 KO) suggests that Joshua (23-1, 21 KO) vacate his belts — or at least those that might delay a fight between the two, chiefly the WBO title — and just make the big fight everyone wants to see.

“All this undisputed bullshit, I’m not really too convinced about it. I’ve won every belt there is to win, and having another stack of belts that I already own don’t really mean shit to me,” Fury said.

“Rather than fight all these mandatories that he’s got, I’d say just vacate those belts and fight the fight that everyone wants to see. I ain’t running from you, I don’t care about you. I’ll go through you like a hot knife through butter. Come and fight the big boy, step up to the plate and get knocked out, then go and fight all those easy guys.”

Joshua, 30, has the WBA, IBF, and WBO titles in his possession, while the 32-year-old Fury has the WBC belt and is widely recognized as the LINEAL!!!! champion of the division, too. Fury’s stance where he doesn’t much care about belts seems real, too; it’s not just a good quote for people to run with, it’s something he’s said many times before.

Joshua is expected to face IBF mandatory Kubrat Pulev on Dec. 12, which won’t interfere with anything because Fury has a contractually obligated third fight with Deontay Wilder to take care of first, which he says is his chief concern at the moment. That fight is expected, for now, to happen Dec. 19.

The WBO situation is the one that could put Fury-Joshua off for a while, if both win their upcoming bouts. Oleksandr Usyk is the mandatory for that title, and he’s said many times he has no intention of taking step-aside money to make way for a Fury-Joshua fight. It’d be hard to even guarantee Usyk, who is 33, the first crack at the winner, because any Fury-Joshua deal would likely be for two fights, and if they split those, it’d be almost impossible not to do a third and get paid again. So you’re talking Usyk having to wait, potentially, at least another two years.

“No disrespect to Oleksandr Usyk, great fighter, cruiserweight world champion, probably gonna be a heavyweight champion if he fights Joshua in the meantime,” he said. “But listen, don’t take my retirement check, baby! Don’t do it! I said to Wilder years ago, I said, ‘Don’t my retirement fund, do not fight Joshua, he’s mine. He’s my countryman! I’m having him! I’m breaking him in!’ But it didn’t happen. He got broken by an unlikely suspect.”

“If they fight, but I bet they don’t. Why would he fight Usyk and get paid, like, 10 percent what he can make off ‘The Gypsy King’?” he pondered. “Forget the belt, vacate it, let them boys fight for the vacant belt, whoever it is, Usyk and (Joseph) Parker, and come fight big time.