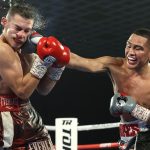 Gabriel Flores was wobbled in the first round but recovered to dominate Ryan Kielczweski over 10 rounds.

Flores used his jab, combinations, and ring generalship to win by unanimous decision.

Judge Lisa Giampa scored the fight 100-90, Dave Moretti had it 99-91, and Steve Weisfeld submitted a tab of 98-92, all in favor of Flores, who remains undefeated in his pro campaign.

Flores started the first round strong, sticking with his jab and ripping combinations and left hooks to the body.

However, late in the frame, Kielczweski countered him with a big left hook that wobbled him across the ring.

Flores recovered well in round 2, as he bloodied the nose of Kielczweski with a sharp jab.

Flores established a rhythm and took full control of the fight from round three on.

He continued to walk down Kielczweski in round five. Flores utilized the outside of the ring and mixed in some short right hands to the body.

Kielczweski (30-5, 11 KOs) was warned for a low blow in round six, though it appeared that he had connected with a left hook on the beltline. Flores came back later in the round, connecting with a flurry of shots, including a sharp uppercut that froze Kielczweski in his tracks.

Flores connected with a combination on Kielczweski in round eight but moved straight back, a dangerous move that allowed the Massachusetts-based pugilist to counter him with a right hand.

In round nine, Flores (19-0, 6 knockouts) landed with a stiff right cross that moved Kielczweski back on his feet.

The 20-year-old had no problems in round 10 as he cruised to the victory and the possibility of a title shot in 2021.

Flores said before the fight that he would like to have a title fight by next year.

While his performance on Saturday was a solid one, he will have to correct some defensive lapses before facing the likes of top junior lightweights Miguel Berchelt, Leo Santa Cruz, Joseph (Jo-Jo Diaz), and Jamel Herring.

For the 31-year-old Kielczweski, Saturday’s loss was his second in three bouts.

Duke Ragan overcame a cut in the third round to outpoint John Moraga over four rounds.

All three judges scored the fight a shutout, 40-36, all in favor of Ragan, who has achieved all of his victories inside Top Rank’s ‘Bubble’ in Las Vegas.

On August 22, Ragan scored a first-round knockout of Luis Alvarado in eye-opening fashion. His performance tonight wasn’t as eye-opening as he worked behind his jab and boxed his way to the win.

Referee Russell Mora warned Moraga twice in the third round for headbutts. However, he still managed to land another despite the warning, opening up a small cut on Ragan’s right cheek.

Moraga, a former MMA fighter, lost via fifth-round submission to Demetrious Johnson for the UFC flyweight championship in 2013.

He was battered, cut, and bloodied, but somehow Guido Vianello came out of a bruising battle with slugger Kingsley Ibeh with a draw.

After six rounds, Adelaide Byrd scored it 59-55 for Ibeh, but she was overruled by Chris Flores and Patricia Morse Jarman, who had it even at 57-57.

While he likely deserved the victory, the hard-hitting Ibeh has to feel like a winner (5-1-1, 4 KOs).

In the opening frame, Ibeh cut Vianello over the left eye with a jab, and it bothered the Italian for the remainder of the fight.

“It’s the entire length of the eyelid.” @TRBoxing prospect Guido Vianello is battling through a nasty cut above his eye. #ZepedaBaranchyk pic.twitter.com/8raG7EAUOi

Vianello was buzzed several times by Ibeh, who was looking to remain undefeated inside Top Rank’s ‘Bubble.’ Vianello seemed hesitant to come forward most of the fight and despite mounting some offense late, did not appear to do enough to win.

For Vianello, Saturday’s performance exemplified that he may have a smaller ceiling than initially thought, while Ibeh proved to be a sturdy test for any young heavyweight prospect.

Judges Chris Flores and Dave Moretti scored it a shutout for Gonzales, but Adelaide Byrd had it 38-38, a draw.

In the opening frame, the 19-year-old Gonzalez (4-0, 1 KO), of Puerto Rico, unloaded a right hand on Marrero that forced him to hold.

Gonzalez connected with a pair of lefts to the body that clearly bothered his opponent.

It was a short night in the office for Mitchell Sipe as he scored a 43-second stoppage of Jimmy Barnes.

Both Sipe and Barnes traded in their MMA gloves for a pair of old fashioned boxing leather, but it was Sipe that did the cracking, sending Barnes down in the opening seconds with a flurry of shots.

Barnes beat the count, but just like their opening exchange, Sipe buzzed him with a right hand and ended up clinching referee Robert Hoyle as the third man in the ring waved off the action.

Featherweight Haven Brady Jr. had a successful pro debut as he scored a fourth-round TKO of Gorwar Karyah. However, the bout was marred by fouls and questionable calls.

Brady was docked a point for low blows in the second round after multiple warnings, and Karyah was deducted himself for excessive holding two rounds later.

In the fourth round, Karyah (2-2, 2 KOs), who was warned for excessive holding eight times over the course of the fight by referee Russell Mora, went down from a right hand to the body. However, Mora missed the knockdown and took a point away from Karyah for holding.

Eventually, the skills of Brady, of Albany, Georgia, proved to be too much. He rocked Karyah while his back was against the ropes, and Mora stepped in at 2:27 of the frame to stop the fight.

Before his fight with Matthew Reed, J.J. Mariano said that he “didn’t care that his opponent weighed in five pounds heavier than me.”

Mariano made an emphatic statement to open up an eight-bout Top Rank on ESPN card at the MGM Grand Conference Center in Las Vegas with a first-round blitzkrieg of Reed.

On Friday, Reed (1-1, 1 KOs) tipped the scales at 149.4 pounds, two pounds over the welterweight limit. Not only were his pockets feeling lighter, but his head was also feeling dizzy.

Mariano (3-0, 2 knockouts) dropped Reed on his rear with a counter left hook he didn’t see coming in the first round. The 26-year-old native of Reno, Nevada, then hit the gas and pounded Reed to the body, prompting referee Robert Hoyle to halt the fight as Reed crumbled against the ropes.