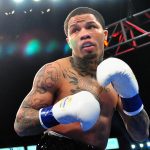 The stage is set for Gervonta “Tank” Davis as to whether or not he’s ready to crossover and become a pay-per-view fighter.

Davis, the WBA lightweight titlist, will be entering his first pay-per-view in an intriguing matchup against WBA junior lightweight titlist Leo “El Terremoto” Santa Cruz on October 31, on Showtime PPV fight (9 p.m. ET/6 p.m. PT) from the Alamodome in San Antonio, Texas, in an event presented by Premier Boxing Champions.

The fight is contracted at 130.

That seemed to be the most pressing issue, since Davis has a history of weight issues. In August 2017, Davis relinquished the IFB junior featherweight title on the scales against Francisco Fonseca.

“Gervonta Davis definitely will make the weight,” Davis himself declared. “This camp has been great for me. I’m already at weight as you can see. I’m working hard; I’m not big. Our camp is not worrying about weight. Our camp is worrying about getting ready for Leo Santa Cruz.”

Santa Cruz stated the Davis is a strong fighter for the first four or five rounds, but after that, he gets tired.

“Tank Davis is dangerous for the first four or five rounds, the most dangerous will be one-through-six, but he is dangerous every round,” Santa Cruz said. “I stand by that. I’m going to have watch out in all of the rounds until the last bell rings. He can catch me in any round, but if I think he gases out in the first few rounds, I’m going to go out on top of him and pressure him, break him down and get him tired.”

Davis laughed off that assertion.

“Most of them don’t last the second part of the fight,” Davis said. “They all go down in one through six, probably seven. Look at my last fight, I knocked out Gamboa in the 12th round. They can say whatever they want. They’re going to have to prove it once we get in October 31.”

For over a year, Mayweather and Ellerbe often spoke about why Davis deserved to be on pay-per-view.

Mayweather feels Davis’ fanbase is growing, and Santa Cruz has a large following in California, Texas and Los Angeles.

“I think he will make weight,” Santa Cruz said. “He looks in great shape. The last fight he didn’t make weight, it was Thanksgiving Day, it was around Christmas, when everyone likes to eat. I think he’s going to come ready.”

The post Gervonta Davis Is Stepping Into The PPV Realm appeared first on The Ring.