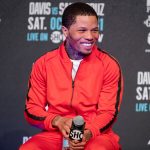 Gervonta “Tank” Davis, one of boxing’s best young fighters, is already a popular draw. He has brought in strong crowds for fights at arenas in his hometown of Baltimore, Atlanta, Carson, California, and even London. His television ratings on Showtime have also had the network enthusiastic about his future.

Now they believe it is time for Davis to take the next step, which in boxing means pay-per-view for the biggest names.

So Davis will make his debut as a pay-per-view headliner against Leo Santa Cruz, a longtime world titleholder with his own fanbase also in his first pay-per-view main event, on Saturday (Showtime PPV, 9 p.m. ET/6 p.m. PT, $74.99) at the Alamodome in San Antonio, Texas, where a socially distanced crowd will be permitted to attend a championship-level card for the first time since the coronavirus pandemic began earlier this year.

Although the bout is contracted at 130 pounds, titles in two divisions will be on the line, Santa Cruz’s junior lightweight title and Davis’ secondary lightweight belt (Editor’s note: the latter is unrecognized by The Ring).

It is not an easy marketplace to be sure, so selling it on pay-per-view may prove to be a challenge. The Showtime PPV card featuring twin brothers Jermell and Jermall Charlo in separate world title bouts on September 26 generated roughly 100,000 buys at best, according to sources. There is also the pandemic and a presidential election consuming national attention. Further, it also happens to be taking place on a jam-packed boxing weekend of fights that do not include a U.S. PPV surcharge: Aleksandr Usyk-Derek Chisora, Naoya Inoue-Jason Moloney and Jaime Munguia-Tureano Johnson.

But those involved in Davis’ career – namely Mayweather Promotions, Premier Boxing Champions and Showtime – believe Davis has what it takes to be a pay-per-view attraction and this is the right time for him to get started.

For Davis, being the ‘A’ side of a main event of a pay-per-view card is a huge deal. It’s been a goal, he said.

“I’m very excited. Fighting on pay-per-view it means a lot. It says I’ve worked so hard,” Davis told The Ring. “I’m definitely grateful. I feel like I have to put on a great performance so I can become that pay-per-view star.” Floyd Mayweather, Davis’ promoter, knows a thing or two about pay-per-view. He is the all-time PPV king, having been involved in several of the biggest selling events of all time, including his 2015 blockbuster with Manny Pacquiao (No. 1) and his final bout in 2017 against Conor McGregor (No. 2). Mayweather has high hopes for Davis.

“When ‘Tank’ was very young, I told him that at some point he’d be on pay-per-view and now we’re here,” Mayweather said. “I’ve always been a fan of Leo’s as well. Both fighters deserve this, the fans deserve this, and I want to see these fighters at their best on fight night. Go out and give the fans what they want to see.

“I know ‘Tank’ is ready for pay-per-view because his fan base is really growing. The demographic that follows him is getting bigger. With Leo being popular on the West Coast and in Texas, he’ll bring a huge following as well. This fight can only be on pay-per-view in my opinion.”

The 25-year-old Davis (23-0, 22 KOs) knows that he has a potentially big career as a pay-per-view attraction ahead of him, but he seems to have the right attitude about the business side of things going into the fight with the underdog Santa Cruz (37-1-1, 19 KOs), 32, a Los Angeles-based Mexico native, who has won world titles in four divisions (bantamweight, junior featherweight, featherweight and junior lightweight).

The explosive-punching Davis is aiming for a memorable performance against Santa Cruz, who although a smaller man has shown a sturdy chin throughout his career. He has only been knocked down once on a rabbit punch in a victory 11 years ago.

“It’s really not important to knock him out or drop him or anything like that,” Davis said. “With me it’s all about going out there, doing what I have to do and that’s not even winning by a little bit. I want to be so sharp out there that it makes people want to watch me again.

“That’s what brings fans. I don’t ever want to be fighter out there winning by the skin of my teeth. I want to put on a great performance. That’s what builds a pay-per-view star.” He has a willing dance partner in Santa Cruz, who still holds a featherweight belt but moved up to junior lightweight in his last fight to outpoint Miguel Flores for a vacant world title. Stung by criticism of his recent opposition, Santa Cruz boldly asked to fight Davis, who won a pair of junior lightweight titles before moving up to lightweight last December and stopping Yuriorkis Gamboa in the 12th round to claim a vacant secondary belt.

“I got a call from Al (Haymon, adviser to Davis and Santa Cruz) telling me that Leo was asking to fight me. My mind wasn’t really on Leo,” Davis said. “I think he had just come up to 130. Once he fought there and won a belt – he has my old belt – he called me out. I didn’t have another opponent coming off the fight with Gamboa. So, it was the right opponent at the time and that’s why we’re here. I’m thankful to Leo for stepping up and calling me out. He wants to test himself out. It shows me that he has a lot of heart and he wants to fight the best. The winner of this should be up there in the pound-for-pound rankings.

“I think this fight is a great matchup because of the skill and the way Leo fights. It’s different than from people I’ve fought. He throws a lot of punches. He has a lot of output. As far as me, I’m explosive, I’m fast, I’m strong. I’m younger. So I think that putting us two together it makes a mega fight. I just can’t wait. I’m not even worrying about anything but putting on a great performance.”

Davis claims he is not worrying about making the 130-pound weight limit even if others are. Missing weight cost him his first world title in 2017 and he has had plenty of issues making weight in other bouts, including against Gamboa at 135 pounds.

However, Davis swears it won’t be a problem. He said he has been close to weight for weeks, having gotten down to 133 two weeks before the bout. He said leaving the comfort of Baltimore to train at the Mayweather Boxing Club in Las Vegas made a big difference in his preparation. He said it allowed him to focus more on training rather than be faced with the distractions of home.

“There was a lot of talk about my last performance, so I wanted to be more sharp for this fight,” Davis said. “Forget the weight. I wanted to be more in shape and more focused. That’s why I moved my camp to Vegas. As far as weight-wise, I know when I’m at 130 I’m in better shape, I’m quicker.” Davis has been devastating at 130 pounds as Hugo Ruiz, a second-round TKO victim, can testify.

“I’m a little concerned. I know he’s come in overweight [in the past],” Santa Cruz said. “The next day he’s going to go up so much, probably 15 or 20 pounds. And he’s going to have a big advantage over me but we’ve been training hard and we’re motivated and want to fight no matter how many pounds.”

Davis spent about three months in Las Vegas, often training under the watchful eye of Mayweather himself, who sometimes was hands on in the ring holding the mitts for him and giving him tips.

“Floyd has just been telling me to stay focused, be patient and be yourself. This is a new task, fighting on pay-per-view against a tough opponent and for two belts,” Davis said. “It’s very important that I go out there and put on the tremendous performance that I’m looking for.”

Mayweather said he was pleased to see how serious Davis took his training.

“Me and Gervonta talked about making the weight earlier for this fight,” Mayweather said. “He came to Las Vegas to do a 12-week training camp. He’s been focused and working extremely hard. Gervonta cannot overlook Leo Santa Cruz. Leo has won titles in four divisions, so he can clearly fight.”

About a month into camp, Davis’ longtime trainer Calvin Ford joined him in Las Vegas.

“‘Tank’ has just really kept this camp serious. Just watching him, I’ve seen him grow,” Ford said. “Gervonta ‘Tank’ Davis: the family man, the fighter and then the businessman. So he’s learning. No one gave him a manual to do this. He’s putting it together on his own.”

With a win, Davis will have plenty of options. He could return to the deep 135-pound division but also said he might remain at 130. He wants to go where the biggest and best fights are.

So while there might be a question of which division he will call home after Saturday one thing is not in question and that is Davis’ main goal.

LEO SANTA CRUZ: I WANT TO FIGHT THE BEST AND WHO BETTER TO FIGHT THAN GERVONTA DAVIS?