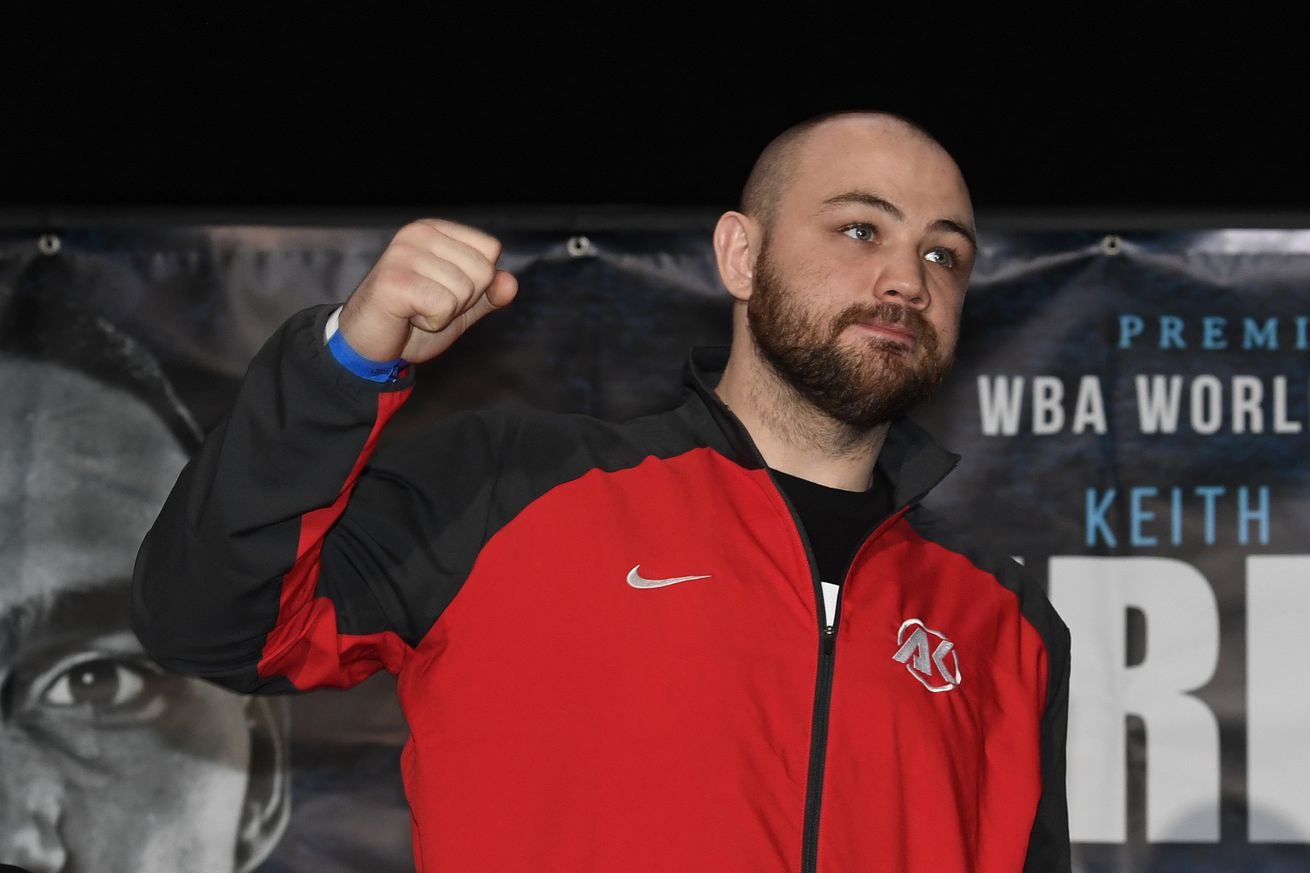 The yellow police tape signaled that something was off on Tuesday when I walked to the Everlast headquarters in NYC to tape the “Talkbox” podcast.

It turns out that some brick material fell off a building next to the Everlast building, and hurtled down to the street. Some matter grazed a walker, a cop told me when I inquired, as I ushered heavyweight contender Adam Kownacki to the production room. We had to take the freight elevator in an open entrance not blocked by tape. (The facade where the material fell had to be checked, assessed, make sure nothing else fell from the sky.)

That brick incident got us thinking abut hard heads, toughness, chins. I got to thinking: I’d not seen the 19-0 Kownacki hit the canvas. Has he been knocked down, I asked him?

”My fourth pro fight, I got hit behind the ear and my glove hit the canvas,” he told me.

So, Artur Szpilka, Iago Kiladze, Charles Martin, Gerald Washington — they didn’t topple him. Did they buzz him, at least?

“No, I’m pretty good. Big strong chin. Speaking of the bricks, it’s good, them falling, hopefully they help my head movement,” he cracked.

The boxer, who has 15 KOs, lives on Long Island, and he and his missus expect their first baby in August, a few weeks after he’s slated to meet Chris Arreola (Aug. 3) at Brooklyn’s Barclays Center.

He grew up, he said, watching Andrew Golota and Lennox Lewis, and then Floyd Mayweather and Manny Pacquiao on those 24/7s. Watching the “Foul Pole” Golota fly high, and then mess up and quit, and then recover — he said he stood by the talented and troubled heavy all the way through. He appreciated Manny’s swarming style, and also how Mayweather marketed himself and treated boxing as a business.

We digressed some and I told him that my oldest daughter told me she doesn’t love Floyd’s IG account, with the “Girl Collection” posts. AK showed himelf to have a sneaky sense of humor and a lowkey charm.

“One thing I respect Mayweather for is how hard he trained even though he made so much money,” he said.

Hey, maybe Anthony Joshua took his eye off that ball and that helped contribute to the Andy Ruiz triumph, we pondered. NYC is a different animal and can distract you, he stated.

Kownacki fought in a Golden Gloves final in front of 5,000 at age 16-17, that helped him get to know the feelings of crazed butterflies in your gut. He met a fork in the road when, at age 18, he thought maybe he got screwed in a big fight final.

Should I continue in a sport that can serve up such disappointment, or find a less messed up sport? I will soldier on, he decided — but more so look to render the judges irrelevant. And that has been his desire since back in the day. He told listeners that trainer Keith Trimble does drill in him to not press overboard for a KO, but yes, be super aggressive, look to not just score points, but impose yourself physically on the foe and darn well be open to scoring a knockout when the situation calls for it.

He said he’s thinking 4-5,000 Poles will be coming to see him, probably even getting their tix through him and his fam. With Marcus Browne from Staten Island being on the card, along with name vet Andre Berto, the building should be hopping.

“Great time to be a boxing fan and be a boxer,” he told us.

And not looking past Arreola, but yes, he does have a rough plan moving forward. Deontay Wilder has to fight a rematch with Luis Ortiz and then Tyson Fury, and then, maybe, AK can tango with the Bronze Bomber. And Wilder, is he a step or two up from anyone he’s met?

“I think he has a hard time fighting backing up,” AK told us. He saw Dominic Breazeale hurting Wilder, and that made him salivate. But oh sure, he knows that Wilder has a vicious right hand.

“If I can take it,” he told us, humbly understanding that he knows his chin is A-plus grade, but he will get tested by the Alabama boxer, if and when that comes to fruition.

We also asked if he came close to taking that sub-in scrap for Jarrell Miller against AJ. Also, Kownacki was asked if he felt funny when he saw Ruiz get that W versus the Brit; did AK know that Ruiz had a real good shot to down the adonis from England? There’s more material from our chat here.

You can watch Kownacki live in Brooklyn on Aug 3, or if not, tune in to see the fight on FOX.