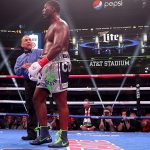 Gregory Corbin (15-1, nine KOs) will take on up-and-coming Croatian star Filip Hrgovic (7-0, five KOs) on the undercard of Devin Haney vs Antonio Moran on Saturday, May 25,  live and exclusively on DAZN, at the MGM National Harbor Theater in Oxon Hill, Md. Sporting News caught up with the 38-year-old heavyweight from West Dallas, Texas, after a training session at the English Institute of Sport in Sheffield, England.

SPORTING NEWS: How would you describe your fighting style?

GREGORY CORBIN: Whatever it takes to win, that’s the only way I can describe it. Some people love it, some people dislike it, but, hey, as long as we get the “W,” that’s all that matters. I’m an adaptive fighter meaning that If I see something and I can make changes during the fight, that’s what I do. That being said, I’m just open to whatever comes.

SN: What do you know about your opponent, Filip Hrgovic?

GC: I really don’t know too much about him. I started watching him when his name came across my desk. I know he’s an Olympian, he’s 7-0 and they’re promoting him well. It’s his first fight in America and they’ve picked me. I’m honored and I’m up for the challenge.

Join DAZN to watch Joshua vs. Ruiz on June 1 and 100-plus fights a year

SN: Will your age and ring experience be an advantage in this fight?

GC: The only thing that will give me an advantage going into this fight is my training. You can have all the experience in the world, but it can only take you so far if you’re not well-prepared for the fight. There are some tricks that you have to have so you can out-slick a young fighter and if I can pull them out, I will. When you go into war you must bring everything, you don’t want to leave any bullets in the gun, you want to leave it all in the ring. I’m excited for May 25.

MORE: Hrgovic says it’s an ‘honor’ to be fighting in U.S.

SN: You have been sparring with Anthony Joshua ahead of his American debut on June 1 at Madison Square Garden. What’s it like to train with a fighter like him?

GC: It’s an honor, man, being in camp with AJ. I’ve learned a lot. I’ve learned a lot about him that I can take home and implement in my own training, like discipline, composure and stuff like that. Certain movements and timing. Everybody has their own style, but it’s always good to wake up every day and learn something new and grow, so that’s what I try to do, keep growing, and over here I’ve grown a lot. I’ve been in camp with damn near everybody you could name, but it’s always good to train and this is some of the best.

SN: You only have one loss on your record, against the former IBF heavyweight champion Charles Martin when you fought March 16 at AT&T Stadium in Texas. You were disqualified for landing four low blows. What did you learn from that defeat?

GC: Well, there’s no excuses. The guy [Martin] came in and did a job and beat me. I could come up with a load of excuses saying this happened, that happened. If you’re not mentally ready, you’re not ready at all. I was ready up until the week before the fight, [and] then something happened that got me out of my zone, and he came in and he was still focused. A lack of focus pushes away your training. I learned a lot of things from that fight; the main thing is to stay focused on the task at hand because this is a serious and dangerous sport anything [and] can happen at any time. You never know when it’s your break and your time. I’m just fortunate that I’ve got another opportunity. I read the critics [and] a lot of people didn’t like the fight, but everyone has something to say whether you win or lose.