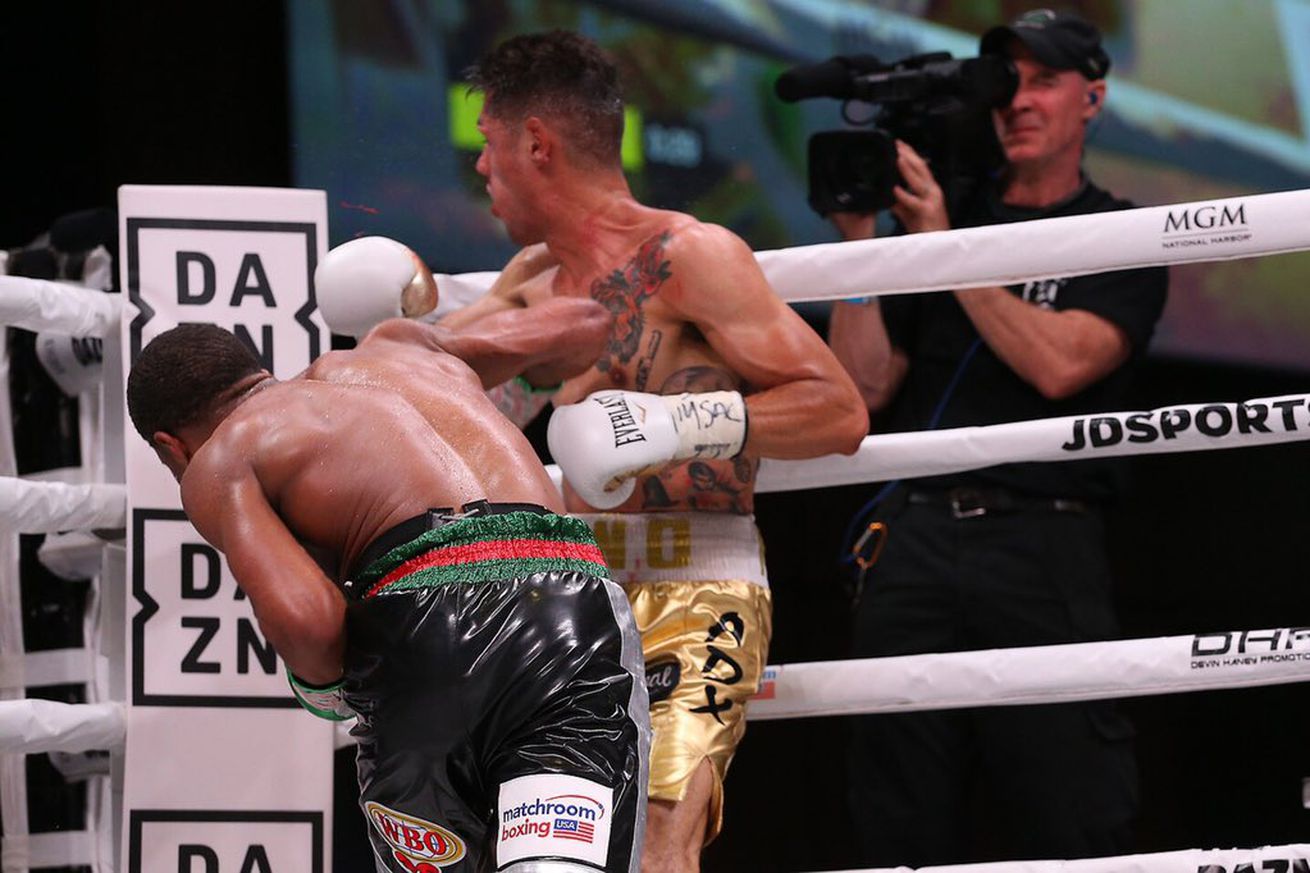 The lightweight prospect’s DAZN debut was one for the highlight reel.

For six rounds, Devin Haney’s DAZN debut was going just about like the rest of his recent fights have gone, with Haney looking sharp, fast, and accurate, owning the ring against a decent but ultimately overmatched opponent.

In the seventh round, though, Haney landed a monstrous right hand that put Antonio Moran down and out, a Knockout of the Year contender as soon as the shot landed and put Moran on the canvas. Referee Kenny Chevalier didn’t even count, and didn’t need to, giving Haney (22-0, 14 KO) the KO win.

Moran (24-4, 17 KO) had never been stopped in his seven-year pro career, but Haney set things up with a straight right that hurt Moran, followed with a body shot, and then came over the top with a thunderous right that ended things.

“I wanted to make a statement. There was a lot of rumors that said I didn’t have punching power, I couldn’t knock guys out, but as you see, I can. I broke my opponent down, then I knocked him out,” Haney said.

“I have speed, I have power, I’ve got ring IQ, and I’ve got head movement. I can do it all,” he added. “I have many tools in the tool box, it just depends on what I want to bring out that night.”

Hrgovic won a bronze medal at the 2016 Olympics representing Croatia, and he improves to 8-0 (6 KO) with this 60-second stoppage of Texas’ Corbin, who loses his second straight to fall to 15-2 (9 KO).

Corbin, 38, got his chance to break through in March, and the result was him punching Charles Martin in the balls enough times to finally get disqualified. Hrgovic, perhaps fearing for his ability to reproduce in the future, took care of things with a right hand to the ear that ended it. Corbin complained that it was behind the head, but it wasn’t.

Hunter (17-1, 12 KO) came in 3-0 with three stoppage wins at heavyweight, and kept the streak alive against professional tough guy Maldonado (26-3, 25 KO), who had never been stopped in boxing, but has now. In all reality, it was inevitable — Maldonado’s 39 years old, has not only had 29 pro boxing fights but also 38 pro MMA fights since 2000. That guy was going to break down eventually, and Hunter did a great job picking him apart and just ripping into him.

Maldonado was technically down three times in the second round. The first was a standing eight count, the second was Maldonado tumbling to the canvas, and the third time, he turned his back and stumbled into the corner, at which point the referee rightly called it off.

CompuBox stats had — I kid you not — Maldonado landing zero punches of two thrown.

“I try to use my quickness, speed, and ability, my experience. I knew I had agile footwork over him, so I just wanted to use that and make it impressive,” Hunter said after the fight.

Asked when he thinks he’ll be ready for a title shot, Hunter said, “I’m not exactly sure. I’m taking it one step at a time, but I would love that fight at any time. Any (eliminator), any chance I can get, I’m taking it.”

Hunter also said that if something happens with Andy Ruiz Jr next Saturday, he’d be ready to step in with Anthony Joshua.

This was a really good fight, great action throughout, a little dirty at times, and just fun to watch. McCaskill, with the win, unifies the WBC and WBA titles at 140 pounds, improving to 7-2 (3 KO), while Sanchez falls to 19-4 (11 KO).

The scores were 96-94, 98-92, and 99-91. The latter two cards were ridiculous, and even McCaskill agreed with that when interviewed after.

“I do feel like the scorecards were a little drastic. I don’t like when that happens to me when I fight somewhere else. Respect to Anahi,” McCaskill said after the fight. “She was a great fighter. I enjoy a good fight, I enjoy a challenge. I enjoyed tonight.”

Sanchez said after the fight, as translated by Sergio Mora, that she felt she got no credit from the judges or referee Bill Clancy.

Bad Left Hook had it 95-95, for what it’s worth. I don’t mean to say “forget the cards,” because it matters, but don’t let the scores deter you from watching this fight if you have the interest in seeing 10 rounds of good action.

Norambuena (3-2-1, 0 KO) is a 27-year-old Chilean who turned pro last August and most recently fought on May 10, losing a decision to Vardges Vardanyan in California. He was a 24-hour replacement opponent for Yeleussinov (7-0, 3 KO), the 2016 Olympic welterweight gold medalist from Kazakhstan. Scores were 59-55, 60-54, and 60-54, but Norambuena came to fight and gave the best effort you could reasonably expect. Yeleussinov, 28, has frankly looked pretty low-ceiling in his last couple of fights. He gets hit a good amount and it’s not like he’s facing top-level opposition or anything.

“This guy was uncomfortable. We didn’t have time to prepare properly for this fight,” Yeleussinov said of going the distance. “I need to work on my timing more.”

Asked if he’s happy with where he is as a pro, Yeleussinov said, “It’s a different sort of boxing. It’s a little bit harder for me to make that adjustment. I’m still on my way.”

Garcia (9-3, 6 KO) came in there to fight, but Simpson (4-0, 3 KO) just had way too much firepower. Simpson is a 19-year-old southpaw from Baltimore who plans to settle in at 154 when his career gets serious. I’ve seen him twice now, and this one was really impressive, he just absolutely battered Garcia with shot after shot after shot. Garcia didn’t go down, but referee Harvey Dock rightly stopped it. It was a flat-out assault. Before this fight, LZ Granderson came through with the huge update that Simpson likes the TV show “The Wire.”

“I’d give me a C. I’ve got a lot more to show you guys,” Simpson said. “I planned to put him on his butt. He didn’t go on his butt, but it was OK. The plan was to get rounds because I’m so young, be calm, but I seen him hurt so I kept going.”

Simpson said he should be back in the ring in about five weeks.