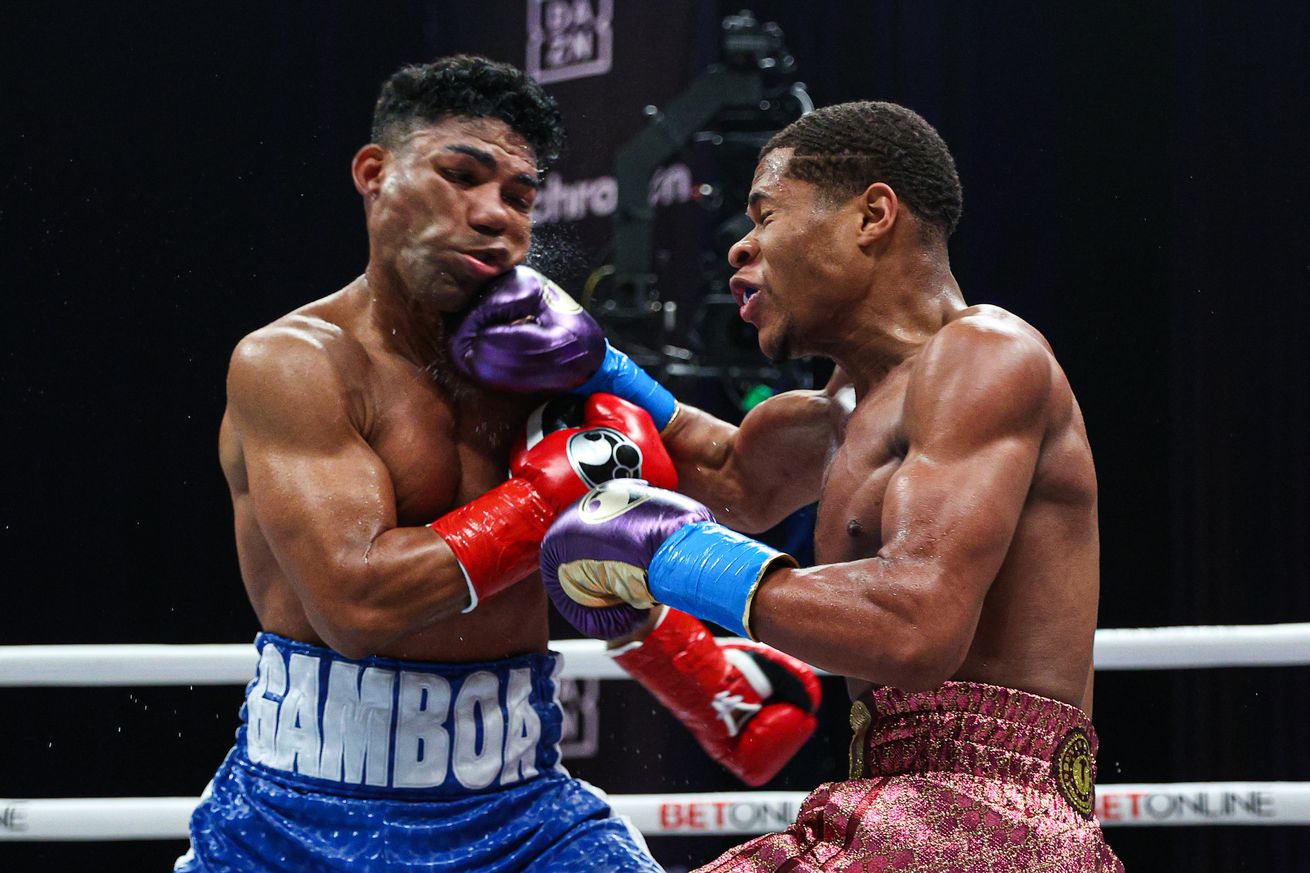 Devin Haney didn’t have the explosive performance he promised, but he kept his belt with an easy win.

Devin Haney didn’t have the performance he promised tonight against Yuriorkis Gamboa, but he remained unbeaten and retained the WBC lightweight title with a virtual shutout victory over 12 rounds in the DAZN main event.

Devin Haney was in the zone tonight

“I thought I put in a workmanlike performance. I wanted the knockout, but he was a crafty veteran, doing a lot of holding, so it is what it is,” Haney said. “I knew he was gonna come in and be scrappy and do anything to survive, and that’s what he did.”

Haney said his surgically repaired shoulder “felt great, 100 percent,” and that he didn’t think there was any ring rust on him. He then turned his attention to what’s next.

“There’s a lot of big fights out there. I’m here and I’m not going anywhere. I want to make these big fights,” he said. “Fighting someone like Gamboa was a stepping stone, but I’m here for the big fights to bring the best out of me.”

As for a specific target, he called out the biggest dog at 135.

“Teofimo Lopez is the one with the rest of the belts, so that’s the main fight I want to make happen.”

Pretty easy night for Hrgovic (12-0, 9 KO), the former Olympic bronze medalist and a top heavyweight prospect. The 28-year-old Croatian put the 39-year-old Booker (26-4, 13 KO) on the canvas in the second, and referee Samuel Burgos called it in the fifth round. Booker wasn’t really doing much or trying to win; this looked like Good Sparring, which isn’t what anyone wants to see.

Booker is a crafty veteran fighter, but he’s not remotely competitive against guys this good. There’s definitely a spot for him against young heavyweights, but not guys as advanced as Hrgovic.

Hrgovic did make some open challenges after the fight:

Zhang (22-0, 17 KO) recently signed with Matchroom Boxing, as Eddie Hearn has at least the thought of taking Anthony Joshua to China for a fight with the 2008 Olympic silver medalist. But Zhang is 37 and may have to actually get a more credible win before then, and that’s no guarantee. He’s big and strong and throws nice punches, but he’s also old and a little slow with his feet and, frankly, he hasn’t fought anyone very good since going pro in 2014.

But he did the job here. Vargas (22-7, 9 KO) is a crafty, annoying (in a good way) veteran fighter, a 38-year-old from Ohio and a former U.S. Olympian, but his pro run has never amounted to much because he’s just not big enough and doesn’t have big power. He usually can give rounds, but when he got rocked and went down in the fourth here, his knee seemed to give out on him, and the fight was over. It’s a decent win for Zhang taken just as what it is, he was winning the fight clearly and looked OK. But a suggested step up against even a Derek Chisora will tell us way more about Zhang and whether he can even get to what most would see as a cash-out with AJ.