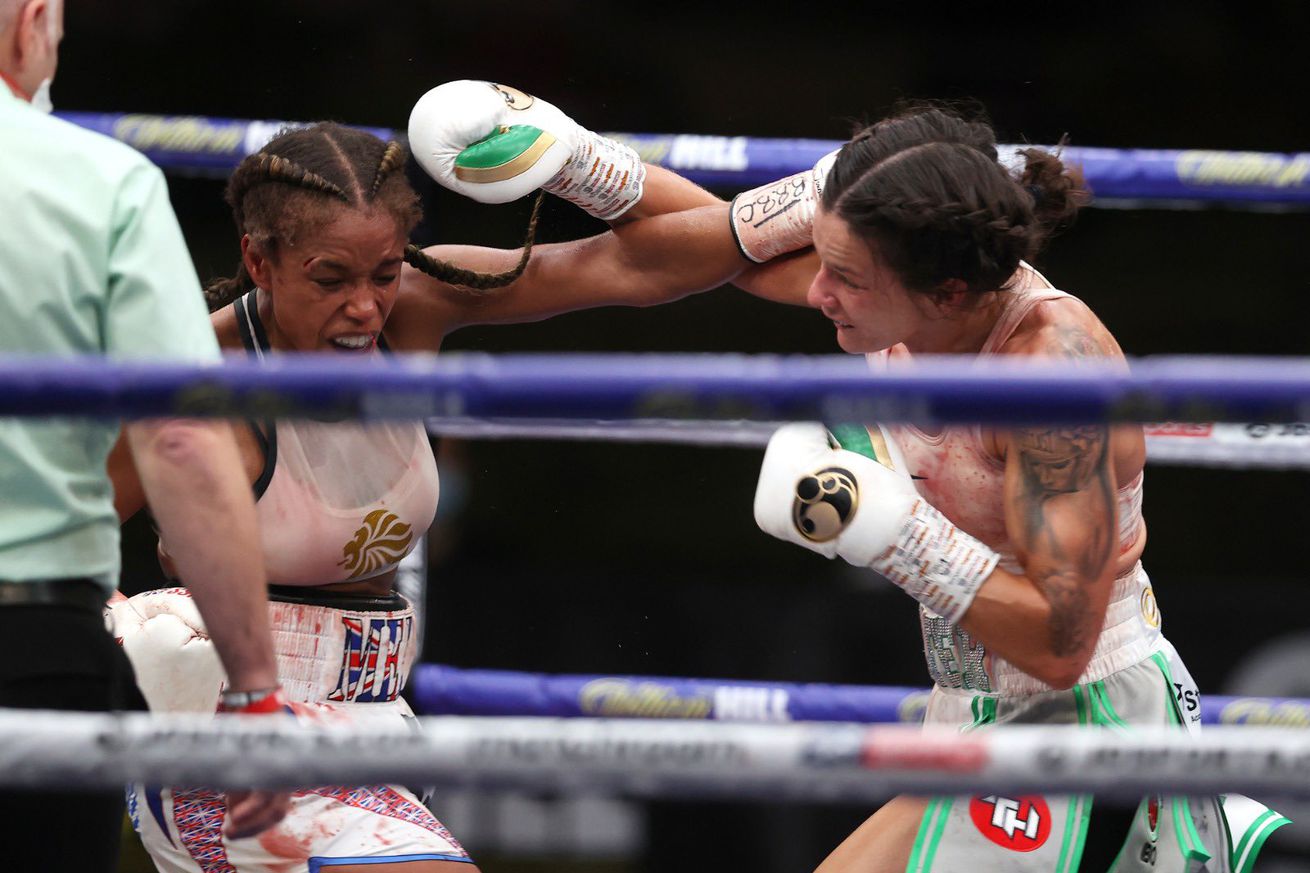 Terri Harper keeps her WBC title, but had to survive a true battle with Natasha Jonas in a split draw.

Jonas, 36, defied most expectations — including Harper’s — and put in what was clearly the best performance she’s had as a professional to date. The 2012 Olympian suffered an upset loss to Viviane Obenauf back in 2018 and had scaled her opposition back in her last three fights, and she came in a clear underdog here against Harper, a fast-rising star in the women’s game.

But Jonas (9-1-1, 7 KO) gave an outstanding effort in an excellent fight. She suffered a cut outside the right eye on a clash of heads in the second round, and Harper (10-0-1, 5 KO) seemed to be getting the better of her, though Jonas was not being dominated.

Starting in the fifth round, the pace really picked up from both, and Jonas was able to meet Harper pretty much head-on. In the eighth round, Jonas landed a clean left hand with a right hook behind it, rattling Harper badly. Harper showed a lot of grit in fighting back, but she was clearly hurt, and her legs buckled on another shot in the ninth round, too.

Harper, though, fought with everything she had in the 10th round, as Jonas’ gas tank seemed to empty out. Jonas was still fighting, but Harper appeared the fresher at that late stage.

Bad Left Hook scored the fight 97-93 for Harper, but with a round or two that could easily have gone Jonas’ way. Judges had it 96-94 Harper, 96-95 Jonas, and 95-95, resulting in a split draw, and just as important, an outstanding, highly competitive fight.

“I caught her with some good shots, she caught me with some,” Harper said. “That’s boxing. I’m disappointed, but I’ve got to think, I’m 23 years old, I had 16 amateur fights. This was a big night. I just want to thank Tasha for an excellent fight. This was a big learning fight for me, and I’ll be back in the gym soon.”

Harper had been extremely confident she would break Jonas down in the lead-up, but never quite got there in the fight.

“I knew she was a tough opponent, but I didn’t expect her to come out like that,” Harper said. “She’s clearly put it all into her training camp, and she wanted a world title, and came after it.”

“I think I won the eighth and ninth clearly, and then I thought I won the 10th,” Jonas countered. “So I had myself one or two up, but it was an honor to share the ring with her. She’s going to be in the game a lot longer than I am, but she made a few statements, and I had to prove those statements wrong. I’m just gutted I’m not coming home with the belt.”

Jonas knew she had Harper in trouble in the eighth round, and tried to close things then.

“There just wasn’t enough time to get me shots off, but it was just one of them nights,” she said. “We had Cheeseman and Eggington, which was a great fight last week, and we just kept it up. I hope eyes were on women’s boxing and people who were maybe on the fence now enjoy it.”

Both fighters said they’d be up for a rematch, and a rematch is deserved here in every way.

“Yeah, I’ve learned from that, and I won’t be lazy and get caught,” Harper said. “I’ve got a lot to learn, and I’ve learned a lot from that.”

This was meant as a tune-up, the 29-year-old Fowler’s third straight fight of that sort, and that’s how it played out. Darren Barker got to say “spiteful” about 42 times as Fowler (13-1, 10 KO) handily outclassed the 32-year-old Harper (9-2, 0 KO), who gave his absolute best effort but simply had no hope of truly competing with Fowler.

Harper took a beating in this one, make no mistake, not the least of which was Fowler hitting him with several low blows, losing a point in the second round and probably deserving to lose another in the sixth, though referee Ian John Lewis didn’t give another penalty there.

Harper was also dropped pretty hard in the fourth round on a lovely right hand, and Fowler tried to get him out before that frame ended, but Harper held on despite eating some significant shots, and you could argue referee Lewis should have stepped in there, but he did not.

Lewis finally saw enough at 1:34 of the seventh round, as Harper had no hope of winning, and his corner didn’t seem to want to pull him out, and Harper himself was a warrior and had no interest in giving it up, even arguing with Lewis’ stoppage.

Harper did have pockets of success here and there, and caught Fowler a few times, but he didn’t have the power to turn that into much. Fowler just kept on going, and otherwise dominated with skill and sheer physicality.

“He hit me with a few good shots, but obviously he’s not a puncher,” Fowler said. “I thought I was quite disciplined, though not as disciplined as I’d like. I’m still improving. I’ve shown a lot in the gym. The higher up I go, the more time I’ve got with (trainer) Shane (McGuigan), the better I’ll be.”

McGuigan called for a fight between Fowler and European champion Sergio Garcia, and Eddie Hearn agreed that could be a good matchup, among others.

“Him against (Ted) Cheeseman is a war, even (Sam) Eggington, JJ Metcalf is a great fight, as well, Scotty Fitzgerald when he’s back up again,” Hearn said, adding of Garcia, “If (Fowler’s team) are confident enough, I’m all for it.”

Price, a 20-year-old featherweight prospect, couldn’t show off too much here, as the 28-year-old Phillips was, as one person put it in the live thread, a real yahoo in there, tricky and unorthodox and reckless with his head and hands both.

But Price (3-0, 1 KO) handled the awkwardness pretty well and picked Phillips (5-5, 2 KO) apart over the distance, slowing the aggressive older man down as things went on, and taking a clear 60-54 referee’s decision.

“I felt I performed well. I think I was boxing nice, listening to instructions. I felt like I could have done more at times, but with an opponent like him who comes in with his head, swinging, you just can’t afford to take the risk, really. In this game, one shot and the fight’s over, and that ruins all my plans.”

“I felt like once I started picking my shots downstairs, he slowed down,” Price added. “The six rounds was no problem for me. We’ll do a couple more six-rounders and then move to eight.”

Billam-Smith (11-1, 10 KO) successfully defends his Commonwealth cruiserweight title in short order, and while it’s easy to say this wound up being a bit of a mismatch — and much too big a step up in competition for Thorley (14-1, 6 KO) — the challenger went down swinging, and it was a fun five minutes of action.

Billam-Smith, 30, largely dominated physically in the first round, starting fast and dropping the 27-year-old Thorley right at the end of the round on a short hook on the inside, when Thorley was trying and failing to tie the champion up.

Billam-Smith started fast again in the second, and was laying heavy leather on Thorley, dropping him a second time just under a minute into the round. But with the fight clearly slipping away from him, Thorley went ahead and threw what he had, which is admirable and made the fight more fun to watch, too. Thorley even cracked Billam-Smith with a good shot, but then walked onto a right hand from Billam-Smith and was dropped a third time. Once again, Thorley got up, but referee Mark Lyson rightly stopped the fight at 2:05 of round two.

“Happy with the win, happy with the finish,” Billam-Smith said. “I felt I hurt him in the first round, you can tell when you’re landing the shots, and then obviously I dropped him. I knew the finish was coming. He did fight back, but he got reckless and walked onto a shot.”

“Thorley wanted to take him into the later rounds, but Chris started so fast and hurt him early, and then his physical size and his punching power — I think he’s a real force,” said trainer Shane McGuigan. “He’s sparred Mairis Briedis and Lawrence Okolie, and the two of them are bringing each other on all the time.”

With Okolie having vacated the European cruiserweight title, McGuigan is hoping to get Billam-Smith a fight for that belt.

“I’m happy with how quickly he’s progressing, and I really want to push him onto European level now,” the trainer added. “I think we can push (promoter) Eddie (Hearn) to get Tommy McCarthy against Chris for the vacant European title by the end of the year.”

“The fights are there, so whatever Shane and Eddie or whoever wants to do with me, then great, I’ll take the fight,” Billam-Smith said of possibly fighting for the European belt.