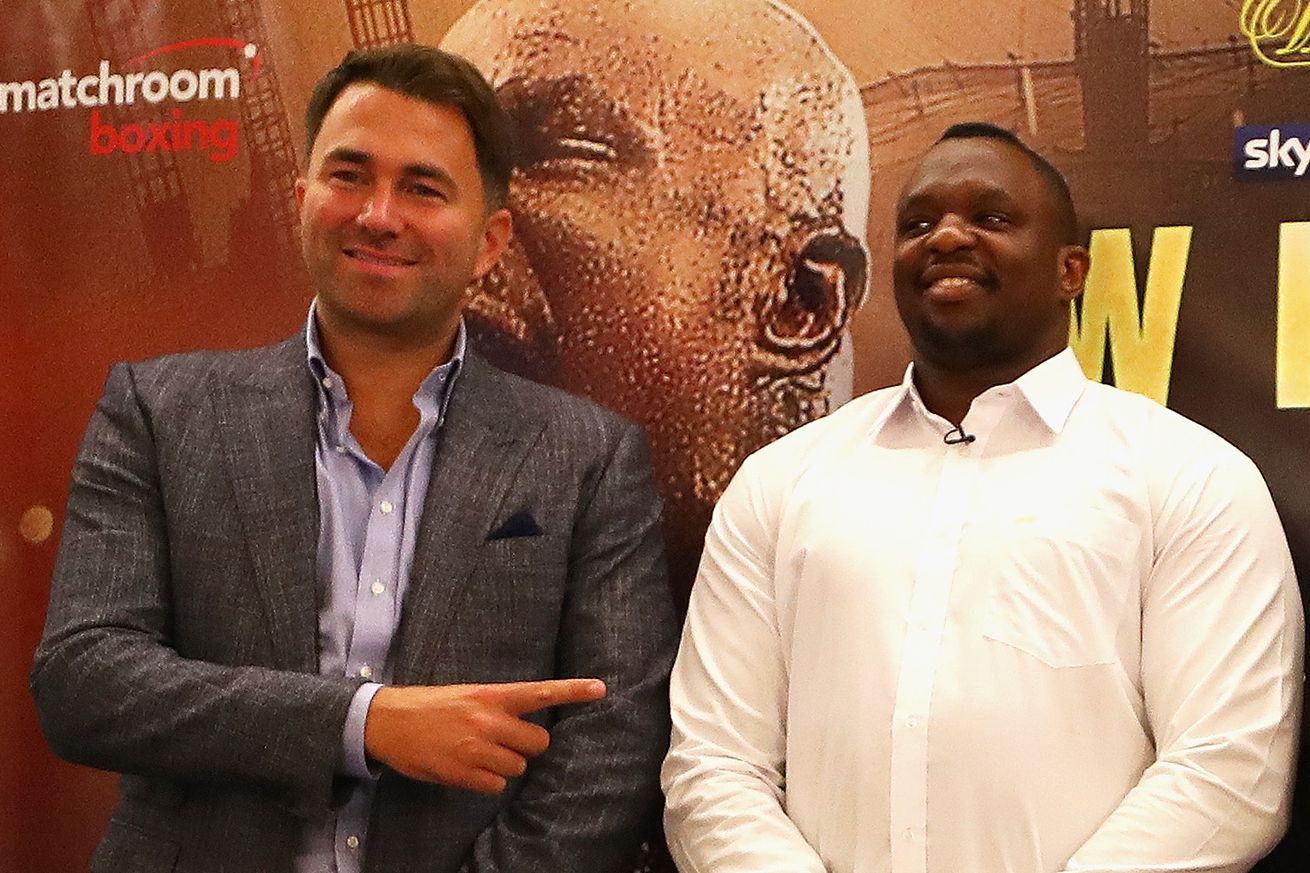 With Anthony Joshua’s New York fight week well underway, Eddie Hearn’s attention is back on the heavyweight mix, and he has thrown up a predictable narrative regarding the move towards Deontay Wilder’s WBC belt.

Predictable in the brash nature of his latest quotes, but less so in the direction of attack — notably a claimed desire for Dillian Whyte to fight Tyson Fury for the WBC’s diamond title, with the winner in line to face the “Bronze Bomber.”

Hearn is calling Fury’s bluff. With the “Gypsy King” claiming he is happy to take on the challenge of Dillian Whyte — providing Fury and Whyte can negate the challenges of Tom Schwarz and Oscar Rivas, respectively — Hearn is looking to put the ball in Frank Warren and Bob Arum’s court, in an attempt to save face in what is for both men, an unnecessary risk.

“After (Whyte) beats Rivas, he will become mandatory — that’s what we’ve requested — but Deontay will be allowed another fight in October or whenever he’s going to fight. We’ll fight Fury next and then after Dillian beats Fury, he fights Wilder.”

“That fight has got to happen next unless Tyson pulls out. But he’s not going to pull out, he’s said that he’ll fight him.”

“That fight is on, it’s been agreed by both sides, Fury has to beat Schwarz, Dillian has to beat Rivas, and it’s on,” he continued.

“The only way this fight doesn’t happen is if one of them pulls out, and we’ve accepted the fight. He’s already said it on interviews (that Fury will accept the fight). They will write to him and say ‘you are now in a negotiation period to fight Dillian Whyte for the diamond title.’”

Dillian Whyte’s done all that has been asked of him in an attempt to land a world title shot. What he thought was his mandatory slot was passed onto Dominic Breazeale earlier this year; Breazeale lasted just over two minutes in his second attempt at world honours having been overwhelmed by a Wilder onslaught.

Whether Whyte would be open to taking a fight against Fury isn’t the question — the “Bodysnatcher” has been vocal in his desire to fight the best out there, dependant on an agreement which sees him taking his fair share of the pot. Fury has proved to hold the same hunger, but with the teams of both fighters looking to maximise earnings during this purple patch of lucrative TV and streaming deals, a fight of this magnitude without the prize of a world title makes very little sense.

Both parties know this; both fighters know this — it’s just unravelling as another convoluted chapter in this stagnating heavyweight circus. It’s less of a case of whether this fight will happen, more of a case of why it won’t, with Hearn and Whyte looking to call the bluff of Team Fury.