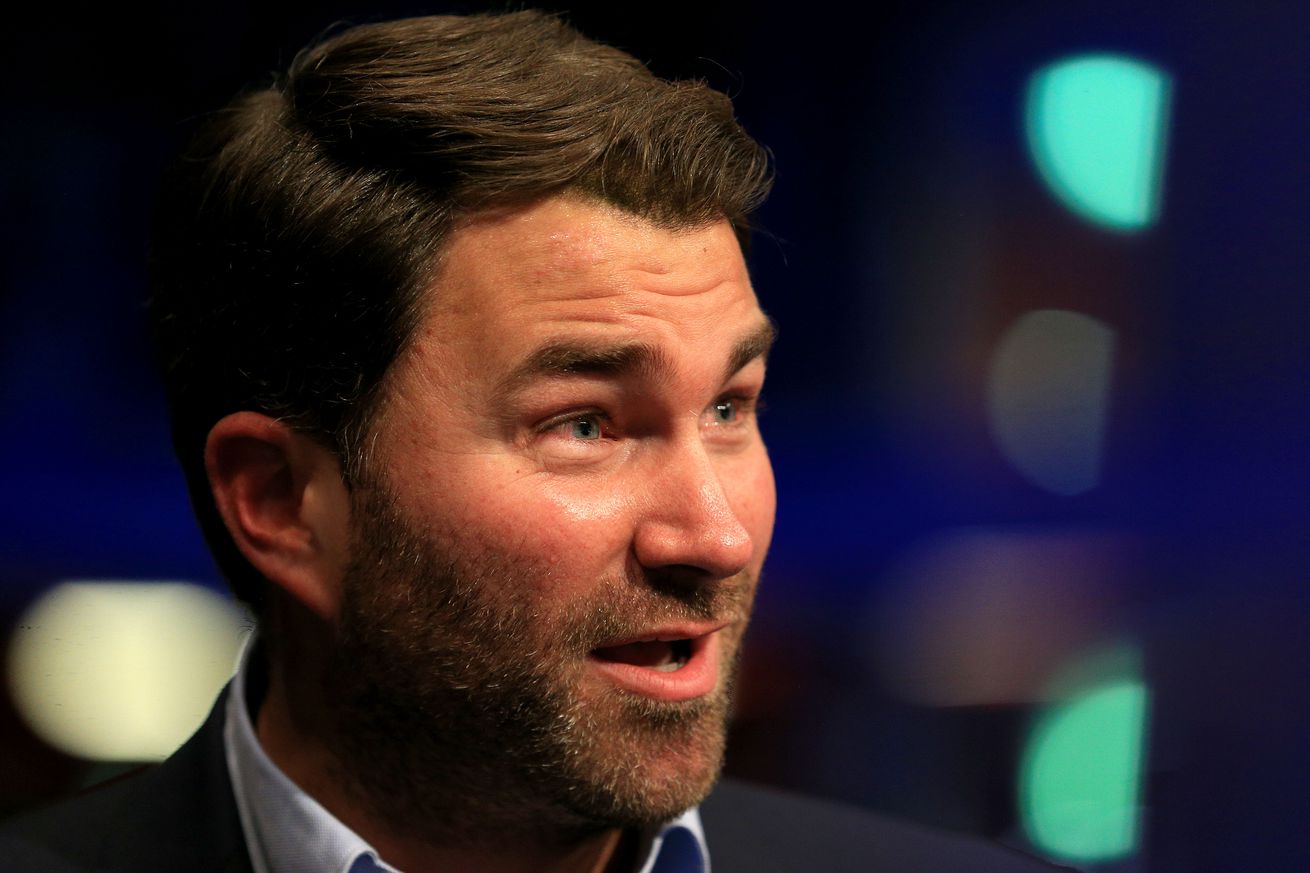 The Matchroom promoter expresses his thoughts on the latest news.

In this video interview caught by iFL TV, Matchroom promoter Eddie Hearn shares his thoughts on Deontay Wilder’s latest announcement that he’ll be fighting Luiz Ortiz in a rematch later this year. Check out what he had to say…

Hearn on the Wilder-Ortiz II announcement:

“I told you! No one fuckin’ listens to me, ever…I told you. I told you! So Joshua goes on ESPN yesterday, says ‘make the fight and I’ll sit down with you after my fight and we’ll do a deal.’ And [Wilder] goes ‘Shit, how can we look okay out of this? Oh yeah, I’ve signed a deal to fight Ortiz, everbody!” What? That morning?!…Come on.

“It’s embarrasing, is what it is. But I told everyone ‘Ruiz, that’s the focus.’ We can’t do anything about people that don’t wanna fight. So we have to take care of our own career, and what we know we are doing — what we’re doing is fighting in a sold out Madison Square Garden on Saturday night against Andy Ruiz. Joshua better be ready, ‘cause this fat lil’ fucker is coming to fight…

“So stop talking about Wilder, it’s a waste of time. He don’t want the fight. They don’t want the fight. He’s talked into something else. He’s not his own boss, he doesn’t make his own decisions. Let him do what he’s been talked into and then when he becomes available after he’s fought Ortiz, after he’s fought Kownacki, then, I guess, we’ll try again.”

On if he’s now convinced that Ortiz turned down the Joshua fight because he was promised the rematch with Wilder:

“Is it a PPV? ‘Cause if it is it’ll do about 100,000 buys. Listen, it’s embarrassing but forget about it, we’ve just got to crack on with serious people.”

On if he knew Wilder would make that announcement yesterday:

“It wasn’t an announcement, was it? It was just an embarrassment. It was like ‘Oh shit, Joshua’s gonna stick it on me again at a presser, let’s just announce I’ve done a fight…I’ve signed for Ortiz.’

“When did you sign? Yesterday? Yesterday afternoon? After Joshua’s ESPN [appearance]. Ooohhh, how convenient…Let’s get on with real plans, come on.”

On if he’s even optimistic that Wilder-Joshua comes off in 2020:

“He’s fighting Kownacki next [after Ortiz]. I told you, he’s done a three-fight deal with Showtime to fight Breazeale, Ortiz, and Kownacki. It’s done!..[Wilder] has the power to say to these guys ‘No, I’m gonna do the fight that makes me an incredible amount of money and I’m gonna do a fight that the public wants.’ Instead he comes out and says ‘I’m gonna right the wrong of the Ortiz fight.’ Ummm, mate, you knocked him out in the 10th round, or the 11th round or whatever it was. You’ve done that, like, pfft!

“Ortiz is getting seriously old. He hasn’t looked good since that fight. But he’s a decent fight, it’s not a horrific fight but why take that fight when you’ve already beat him and you’ve got Joshua there to go, in an undisputed fight, in one of the biggest fights in boxing history?!”

On he’s going to now shift his attention to making a Joshua-Fury fight:

“A little bit, yeah. I mean we have to take care of our mandatories as well, WBO mandatory, IBF mandatory. So the WBO haven’t ruled yet on the mandatory situation, but we have a WBO mandatory due…we have an IBF mandatory due in Pulev. We’ve got maybe even a Dillian Whyte fight we just jump into in November. I don’t know, there’s lots to talk about…”