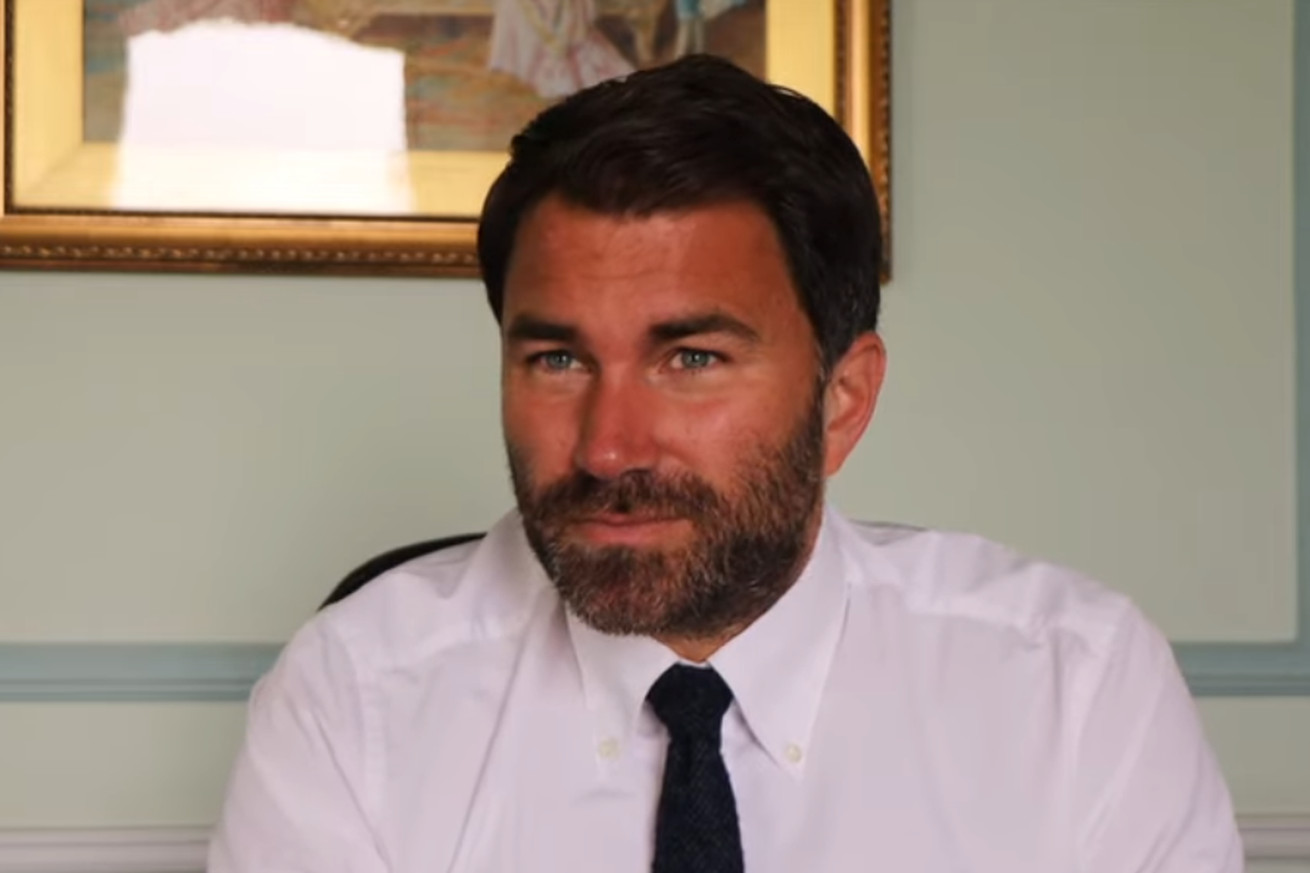 Promoter Eddie Hearn says there are around eight fighers being considered for Anthony Joshua’s June 1 opponent.

Matchroom Boxing promoter Eddie Hearn always has a lot on his plate, but now he’s facing major uncertainty over Anthony Joshua’s U.S. debut at Madison Square Garden on June 1, as Jarrell Miller has failed a drug test. There’s already plenty of speculation about possible replacements, and Hearn sat down with iFL TV to talk about what’s going on as of now.

On the status right now

“We’re working away, obviously. I spoke to AJ — June 1st, Madison Square Garden, that’s the date. Obviously we got a lot of phone calls last night from a lot of heavyweights who smell the pound note and want to fight for the world heavyweight title. So we’ve got to go through the ones who are genuine and the ones we think are credible, and go from there.”

“Everyone’s extremely disappointed. It’s a fight that we wanted. It was a good fight. Obviously (Miller’s team) wanted the fight. I saw a tweet from someone, someone said, ‘Jarrell Miller had won the lottery and all he had to do was cash the ticket, and he didn’t do it.’”

“Without kissing his ass, AJ was incredible. … He was the first person I called. … He said, ‘You’re joking.’ He didn’t even sound that surprised, to be honest with you. He went, ‘OK, well, who’s next?’ I said, ‘Well, who do you want?’ He said, ‘Absolutely anyone. No problem. Anyone.’”

“I don’t think he’s over the moon with Jarrell Miller, especially everything that’s been said in the build-up and stuff like that, but if the B-sample does come back positive then at least — this is the reason that these tests are insisted upon by him and the team. Now it’s gonna be the big debate, the multi-million dollar question, who’s he gonna fight?”

“It don’t look good, is what I’m saying. There’s a lot of issues to overcome, contractually as well. I think that right now the mindset is, ‘who’s the replacement?’”

On what the New York commission may rule

“It’s irrelevant to me. What can I do about it? Absolutely nothing. … It’s not up to me. I can’t go to VADA or the commission and say, ‘Give him a five-year ban!’ Or I can’t go and say, ‘It’s alright, let him fight,’ which would be the completely wrong thing to do anyway. There’s nothing I can do other than go through all the calls we’ve had in the last 12 hours and decide on who’s right, who’s wrong, who really wants it, who’s just fishing, who’s messing around — go through it, and go ahead with the Garden on June 1, building a massive card. Katie Taylor was just announced two days ago for an undisputed title fight. It’s not ideal; it’s boxing, it’s life, we go on.”

On there being a contingency plan for the fight

“I know people who have said, ‘Just to let you know, I’m training for this fight and if anything happens with Jarrell’ — there’s actually one person who quite eerily said, ‘Just to let you know, I’m ready to fight Joshua on June 1.’ And I said, ‘He’s fighting Miller.’ And he went, ‘I know, but just in case anything happens, I’ll be ready.’ This was a month ago. And they messaged me again last night and said, ‘I’m ready.’”

On getting calls from possible replacements

“As you can imagine, last night, a whole host of — I mean, ones that if I made, you would lynch me. And obviously a lot of credible guys. People see a massive opportunity, and so they should. It’s not like we’re two weeks away, we’re just under seven weeks. So really if you’re a heavyweight, you’ve got enough time to prep for the world heavyweight title.”

“Love that fight. Love that fight. That is an ideal scenario. That is a big fight. His team spoke to us, my feeling from them was he won’t be ready. I disagree with them. The argument is that’s a better fight or a tougher fight than Jarrell Miller, some might say.”

“I saw Manuel Charr said they’re in negotiations. We’re not. He sent me a text saying, ‘I will accept the fight.’ He’s WBA regular champion. He’s on a list of eight who I would say are at least sort of registered in the mind to at least look at and consider.”

“If Dillian Whyte wants to fight Joshua in June, bit weird at MSG, 100 percent. But he ain’t gonna be ready for June 1. If he is and there’s a serious conversation, we’ll talk on that. But he’s training for July.”

“I don’t look at Joe Joyce as, like, heavyweight world championship contender yet. I think he’s a really good fighter. He’s not registered in my mind like an Ortiz or Kownacki or even a Charr.”

“A lot of people talk about Michael Hunter, who we’ve signed as well. Michael Hunter is actually a tricky fight for AJ. Smaller, American, good fighter, coming off two good wins, one loss in his career to Usyk.”

“Pulev we like as well, if he wants it. I know he’s got a few issues.”

“David Haye phoned me up, he said, ‘Just to let you know, if Chisora knocks out Gashi on Saturday, we’re calling out AJ at the O2.’ Do what you want.”

“It is madness, but it’s boxing. I don’t know what else to tell you.”

“Any fighter really, that says, ‘Seven weeks ain’t enough to fight for the world heavyweight title,’ when you’re not making weight, I mean, it’s a cop-out.”

On if his first choice would be Luis Ortiz