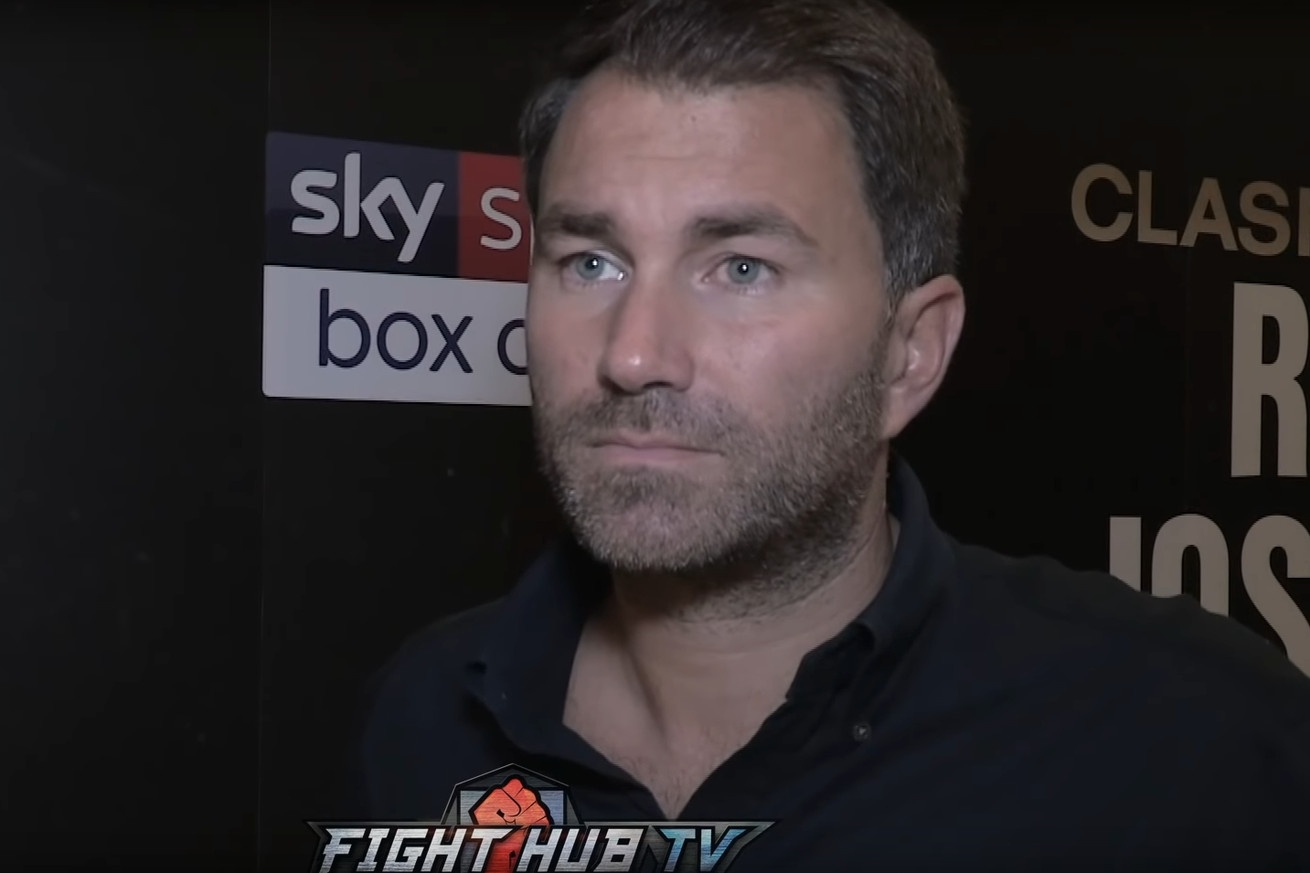 The Matchroom promoter fields some questions about this weekend’s big card in Saudi Arabia.

With plenty of folks touching down in Saudi Arabia for this weekend’s heavyweight title rematch between Andy Ruiz Jr. and Anthony Joshua, Eddie Hearn takes some time to field a few questions about the event and what it means for some of his fighters. Check out some excerpts below…

Hearn on how Joshua has been in the recent weeks leading into this rematch:

“Well I think he took a little bit of time to reflect…don’t be fooled by the arm around the shoulder, ‘respect to Andy Ruiz.’ Just because he didn’t sulk and run out of the ring it doesn’t mean he wasn’t hurting inside. He was gutted he lost, but he’s used that as an inspiration to become a two-time heavyweight world champion, and to try to improve. And once he’s got that in his mind, he’s been extremely focused.

“I think the difference now between the Anthony Joshua that rocked up in New York…to the guy who turns up tonight with probably a little bit of a chip on his shoulder when he starts talking about wanting to punish Andy Ruiz, that’s the AJ that I like and that’s the one that I remember when we first signed him. But it’s very difficult to sometimes lose that kind of edge when you’ve just got people patting you on the shoulder telling you you’re the greatest. Now you’ve got people doubting him, now you’ve got people criticizing him.

“Now you’ve got that element where back’s against the wall and preparation couldn’t have gone better. He’s in great shape, he’s in a great frame of mind, but it’s a very, very tough fight and it’s gonna be a thriller.”

On if Joshua’s career is on the line with this fight:

“I don’t mind the pressure of that because I quite like him under pressure, because I think he performs. But when you’re talking about a 30-year-old man who would’ve had 24 fights, lost to one man, and unified the world heavyweight championship twice — he’s got a lot of improvements to make, he’s getting better and better. So don’t write him off yet but we don’t even want to think about losing. For me, he has a future win, lose, or draw. But the only thing that matters is the win. And that’s the only thing he’s focused on.”

On Dillian Whyte being a late addition to the card and how he’s able to fight considering that previously failed drug test:

“He had to be cleared by the British Boxing Board of Control to take this fight, and he has been because he’s not suspended, he’s free to box. The frustrating thing is waiting for UKAD to issue a public statement on what happened and their findings or whatever that may be. He’s had his hearing, he was cleared to fight, that fight was five months ago. He’s got to fight! He can’t just sit around waiting for UKAD, they need to speed up their process.

“They’ve already [cleared the adverse finding] in the respects of having a hearing and clearing him to boxing. If they think [he legitimately tested dirty] they wouldn’t and shouldn’t have cleared him to box. So they’ve got their reasons for that, we know those reasons, we want them to let it now be public because it will give the public a lot of information they need. But in the meantime you can’t expect Dillian to sit on his backside waiting for someone to issue a statement about why he was cleared. He’s been cleared, he’s free to box, get on with your career. And he needs to look good on Saturday against Mariusz Wach.”

On how damaged Whyte’s reputation could be going forward:

“Very damaging, but you know, he’s not a golden boy. He’s a rough, ready geezer from Brixton who can really have a tear-up. And he’s been through a process that’s affected him personally and mentally, but he’s a very strong individual, he’s come through there. He’s gone through all the channels he was asked to go through: to attend a hearing, to provide all the information, all the VADA test. He provided that information and he was cleared to box. You don’t clear a man to box if there is doubt or suspicion, in my opinion, of him cheating.”