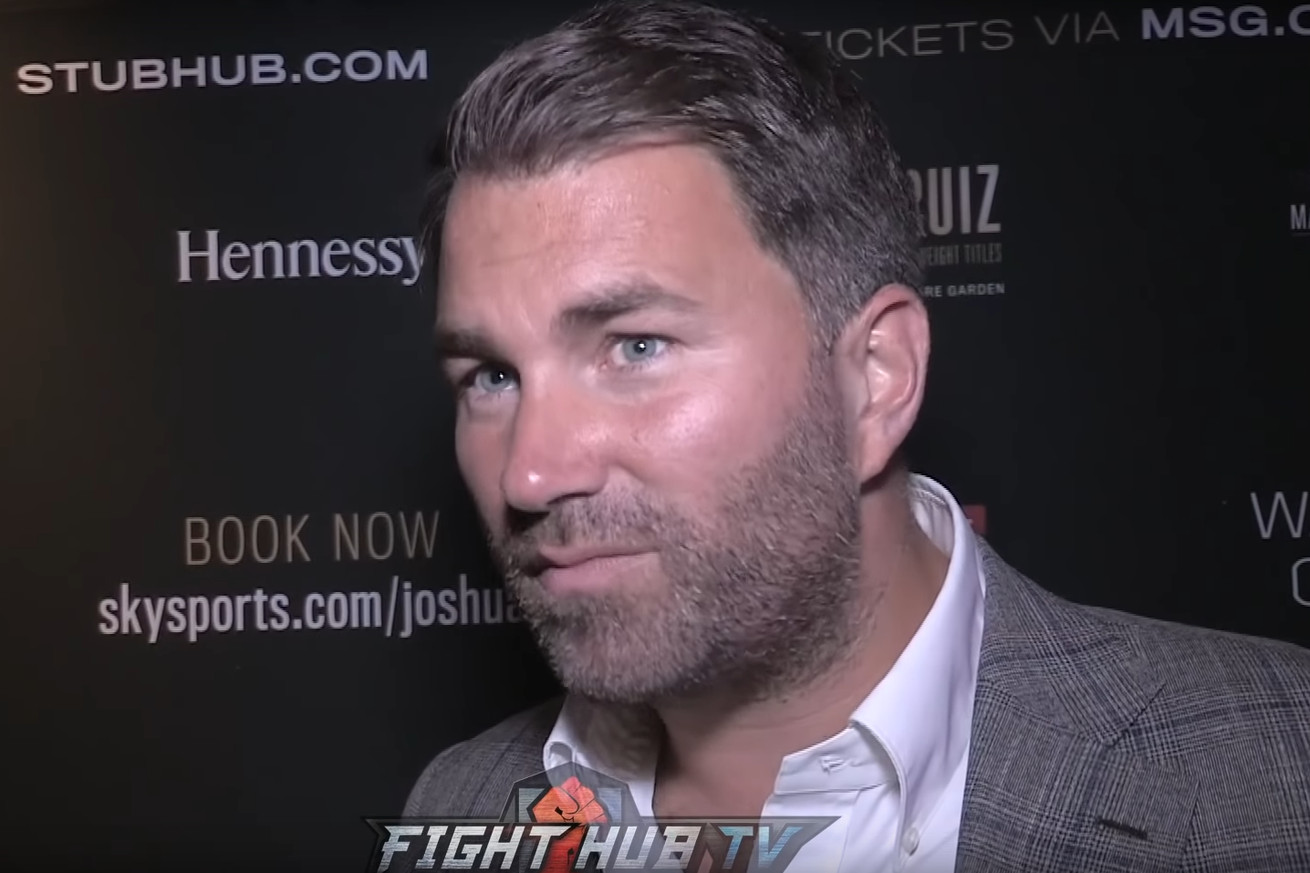 The Matchroom promoter weighs-in on the state of Wilder-Joshua.

In this video interview with Fight Hub TV, Matchroom promoter Eddie Hearn talks about Anthony Joshua’s title defense this weekend against Andy Ruiz Jr. and what he makes of a potential fight against Deontay Wilder now, considering Wilder’s latest electrifying performance. Check it out…

Hearn on how Andy Ruiz ultimately got the fight over the other fighters in consideration:

“Well, we got here because he was the one willing to step up. You know, he was a guy in the top-15, he’s a guy who is obviously relevant to the U.S. market, which is a reason we’re here. He’s fought for the world title, many believe that he could’ve won that fight. He’s Mexican. We have a huge amount of DAZN Hispanic subscribers through Canelo. He has a chance to make history as the first ever Mexican heavyweight champion, but most importantly he was a guy who convinced me that he was here to fight, convinced me he was here to let his hands go. And that’s what I wanted.

“I don’t want to travel all this way, fill the best arena in boxing with a guy who freezes and gets knocked out in a round. I wanted someone who would come and do everything to win, would let his hands go. And Andy convinced me that he was they guy. I spoke to people, you know, even Canelo, Oscar De La Hoya, Jessie Vargas — all these people saying ‘you know this guy is a serious fighter.’ Don’t worry that he looks like me in shorts, he can fight.

“And, you know, he’s part of the Mexican amateur team, he’s a very, very talented fighter. One defeat to Parker in New Zealand — many people thought he wont that fight. So don’t rule him out, and on paper, yes, I expect AJ to knock him out, but don’t be surprised if you see some hairy moments. You know, Ruiz is gonna come and let all his leather go in this fight.”

On if Ruiz’s physique is misleading:

“Massively misleading. And that was a problem when I was making the fight because I knew Ruiz was the guy to give us the entertainment, but I also knew he was the guy that when we announced it the pictures would go out on social media, ‘oh he’s not ripped, he hasn’t got a six-pack, etc., etc.” but I had to go with the guy I knew would give you value for money. You know, the guy I knew would put his heart on the line, they guy I knew was skillful enough to cause Joshua problems. And every day of the week that was Andy Ruiz, you know?

“So I wish he had a six-pack, but he doesn’t, but all I can tell you is listen to people in boxing who will tell you this is a much tougher fight than Jarrell Miller.”

On if Deontay Wilder’s latest highlight reel knockout puts pressure on Joshua to have an explosive performance here:

“Not to him but for me, I want him to make a statement. You know, I want him to beat Andy Ruiz, I want him to look amazing. But Wilder was fantastic. I thought Breazeale froze, I thought he was beaten at the weigh-in and at the press conference, but it was still a brilliant performance and Wilder does what he does — he knocks people out. He has a lot of power, he’s exciting, you know, all this stuff. But, for me, Joshua’s on another level.

“Yeah, I think there is a little bit of pressure in that respect because Wilder’s laid down the gauntlet. He’s said ‘I’m done, over to you’ and Josh has got to come up with the same answers.”

On Tyson Fury being in the mix with a fight coming up:

“But Fury’s never gonna come out, look sensational, knock someone out. Fury’s an incredible talent at looking awkward, being awkward, and outboxing someone. He’s never gonna come out and make a statement. So Fury’s gonna do what he’s gonna do — he’s gonna beat Schwarz either by outpointing him or wearing him down and stopping him later on but the two most exciting heavyweights on the planet — it’s not even close. Now Wilder and Joshua are incredible to watch and that’s the fight that everybody needs to see.”

On the rumors that Wilder’s co-manager Shelly Finkel recently met with DAZN’s John Skipper and if that’s a sign a Joshua fight could be back on the table:

“I think the best route is for John to be the intermediary, if you like, and try and get that done. That’s what he’s trying to do at the moment. We hope he’s successful.

“I can’t [do it]. They won’t see me. They won’t talk about the fight, so I think John’s the perfect person to go in and try and make it happen.”