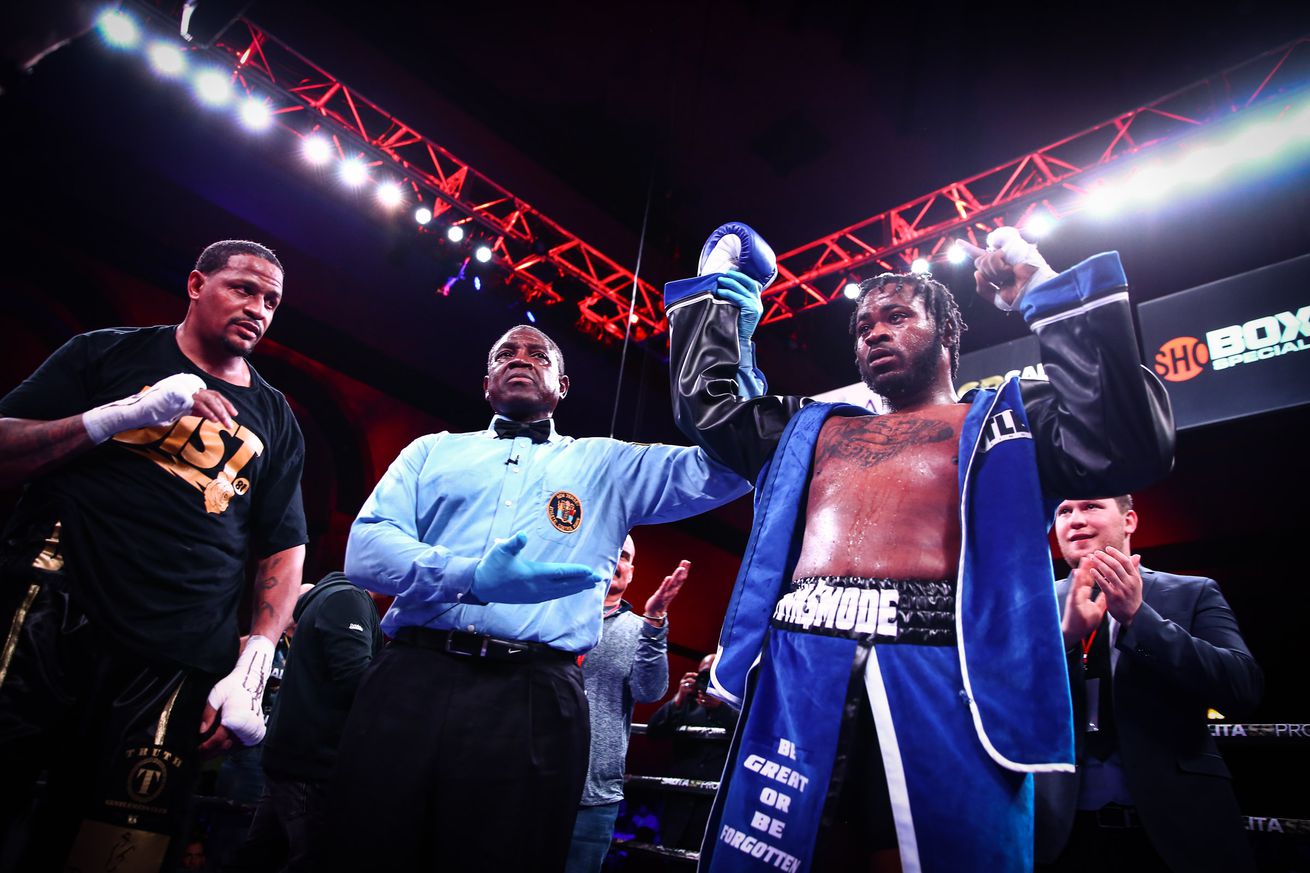 We hear talk now of the Big Three heavyweights, and all the hardcore fight fans knows full well who they are: Deontay Wilder rules America, Anthony Joshua rules Britain, and Tyson Fury could well maybe beat either of them on any given night.

But this division always seeks new talent and yes, those three stalwarts will be needing foes in the upcoming years. To be honest, the pool of foes could be a wee bit stronger, in best case scenario. Dillian Whyte is pretty highly-regarded, Jarrell Miller was/is on the list of second-tier guys on the rise, but no, there isn’t an endless list of up and comers who fight fans see lining up on the horizon.

But that doesn’t mean there won’t be in a year, and that some young guns aren’t assuming that in a year or two, they will have supplanted one or two of the big three, and will instead be seen as kings of the class.

Jermaine Franklin, who is promoted by Dmitry Salita, sees himself as an up and comer, and sees himself in big stage bouts in the not too distant future. He engaged in a fan friendly tango with ultra vet Rydell Booker in Atlantic City, on the Claressa Shields vs Christina Hammer undercard on Showtime April 13.

I touched base with the 25-year-old hitter, who lives in Michigan and holds an 18-0 mark. He is slated to glove up next July 12, versus 25-2 Jerry Forrest of Virginia.

First off, I wanted to know about that last bout, a win over the crafty Booker (age 38; he had three fights in 2018 after taking a break from 2004 onward).

“It was a great learning experience. I learned I need to be patient. I didn’t stick to my game plan. In order to be successful going forward I have to stick to game plan. Yes, it was a harder fight than I expected. That was Bookers’ best performance in my opinion. He is a great counter-puncher and he showed me a lot of things I can use going forward.”

So, what do we see next from you?

”A more improved version of me,” said Franklin, who has 13 KOs to his credit. “I didn’t come into the last fight at the weight I wanted but this fight, I should be in top shape.”

So, where does Franklin see himself right now? How does he stack up versus some of those other upward movers?

“I see myself in the top five. People may disagree but I have a lot of confidence in myself. I have the heart and desire to be the best. Every fight I set out to show it.”

Jessie Addison is his head trainer and Franklin terms him “the best in the business. He understands my weaknesses and turns them into strengths. He is like a father figure. Lorenzo Reynolds handles my fitness. He works with other boxers but he works me very hard. He not only tells me how to get into shape but he works out with me so he stays in shape.”

I also asked for his take on some of the A-graders.

”Wilder is going to be tough to beat for any fighter going forward. He has power and skills. Give him my number, tell him next year we can get it on,” Franklin said, chuckling. “He has some weaknesses I would like to show him.”

What does he think will happen in the Joshua vs Ruiz fight?

”Ruiz is coming to fight but Joshua will win. Joshua is too strong and has too much game for Ruiz. Joshua in four or less.”

Noted. And back to him, what does he expect from himself in the next year?

”Challenge for one of the belts. Being in the top five. Gaining much-needed experience and staying in shape. Whoever has the championship belts, but I would love to take on Charles Martin or Adam Kownacki.”

Franklin lives in Saginaw, Michigan, and credits his family for offering superb support.

“The best any up and coming fighter could hope for. They have been in my corner from the start and they love what I’m doing!”

Side note: We the media probably don’t give enough ink to fighters who do good deeds. So let Franklin have the floor for philanthropy.

”I’m proud that I started my own corporation, Jermaine Franklin Jr Inc. The team I put together has helped me to get to this point of my career and we have some major news coming before the next fight. I’m continuing to grow my corporate brand and I want to make the city of Saginaw proud!”