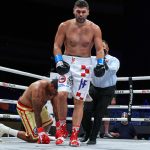 Filip Hrgovic became the first fighter to stop Rydell Booker on Saturday, scoring a fifth round stoppage in the co-main event to the Devin Haney vs. Yuriorkis Gamboa card at the Seminole Hard Rock Casino in Hollywood, Florida.

Hrgovic (12-0, 10 knockouts) of Zagreb, Croatia overwhelmed the 39-year-old Booker (26-4, 13 KOs) of Detroit, Michigan, scoring a knockdown in round two with a chopping right hand high on the head at the tail end of a two-fisted assault thrown from various angles.

Booker, who had previously sparred with the 28-year-old Hrgovic in Miami, had previously lost to James Toney (in 2004), Jermaine Franklin and Kubrat Pulev. Booker had spent 12 years in prison for cocaine trafficking before returning to the ring in 2018.

Hrgovic had his work cut out for him, not because of what was coming at him, but what wasn’t. Booker only landed a total 16 punches, meaning that the 2016 Olympic bronze medalist would have to work hard to open up the survival-minded Booker. Hrgovic used his jab to the body to try to set up his right hands upstairs, and found his target by overwhelming Booker with activity.

The referee warned Booker after the fourth that he would stop it if he didn’t show more activity, and then made good on that promise 43 seconds into the next round.

“Good job to the referee, you’re too old,” joked Hrgovic while embracing his old sparring partner. Booker pushed him away before walking back to the corner. Hrgovic said he was surprised how many punches Booker was able to take, and criticized himself for being too “stiff” and “tight.”

Hrgovic admits he needs “a couple of hard fights” a level below the top fighters in the division before he can get a world title opportunity, but said he was more than eager to do just that.

“I would like to fight the best in my division. It would be hard for my promoters and manager to put those fights together but I want the best in the division. C’mon guys, sign that contract. Everybody we send a contract, they decline,” said Hrgovic.

Asked who he would fight as a step-up, he listed essentially everyone underneath the championship level, including Michael Hunter, Zhang Zhilei, Daniel Dubois, Alexander Povetkin, Dereck Chisora and Dillian Whyte.

“I want all these guys to fight and to beat. This would be my preparation for the best in the division,” said Hrgovic.

Hrgovic didn’t have a monopoly on heavyweight fighting on the card. Two-time Chinese Olympian Zhang Zhilei (22-0, 17 knockouts) had as good a Matchroom Boxing debut as could be hoped for, scoring a fourth round knockout of 2004 U.S. Olympian Devin Vargas. The official time was 49 seconds, after a check right hook from the southpaw Zhilei opened Vargas (22-7, 9 KOs) up for a brutal left cross that sent Vargas straight to the canvas.

Vargas was awake, but complained of an injured knee, and remained down for several moments before turning down medical help.

Zhilei, 37, of Zhoukou, China but now training out of Paterson, N.J. with Shaun George, earned a silver medal at the 2008 Olympics before losing to Anthony Joshua in his second bout of the 2012 Games. Zhilei stands 6’6″ and weighed 259 pounds for the fight, towering over the 233-pound Vargas.

Vargas, a 2004 U.S. Olympian from Toledo, Ohio, showed some of his craft in the second round, landing quick combinations before moving away.

Unbeaten welterweight Reshat Mati (8-0, 6 KOs) needed less than three rounds to put away Marcos Mojica in their six-round welterweight bout. “The Albanian Bear” Mati, a 2018 National Golden Gloves champion from Staten Island, N.Y., scored a knockdown in round one with a short left hook off a clinch, and then put him away with a left uppercut in round three, forcing Mojica to turn away and go to the canvas.

The time of stoppage was 1:40, as the Argentinian Mojica loses by stoppage for the fifth time.

Mati, 22, is trained by Aureliano Sosa and managed by Keith Connolly.

In the broadcast opener, Raymond Ford (7-0, 3 KOs) of Camden, N.J. scored a knockdown in round one and three en route to a third round stoppage of Rafael Reyes (18-11, 14 KOs) of Clovis, New Mexico. Ford, the 123-pound National Golden Gloves champion, was in total control against the most experienced opponent of his young pro career, landing to the body and mixing up combinations upstairs from the southpaw stance. Ford, 21, landed a strong left hand to put Reyes through the ropes for the second knockdown. A follow-up attack brought the fight to an end at the 1:26 mark. Afterwards, Ford called out Sean Garcia (5-0, 2 KOs), the younger brother of Ryan Garcia, for a fight in 2021.

In the swing bout, Arthur Biyarslanov (7-0, 6 KOs) had a short night of work, knocking out Juan Jose Martinez (28-10, 20 KOs) in 59 seconds. The knockout came on a right hook to the top of the head that put Martinez down, leading to a referee stoppage. The Montreal-based junior welterweight is originally from Russia and is trained by John Scully.