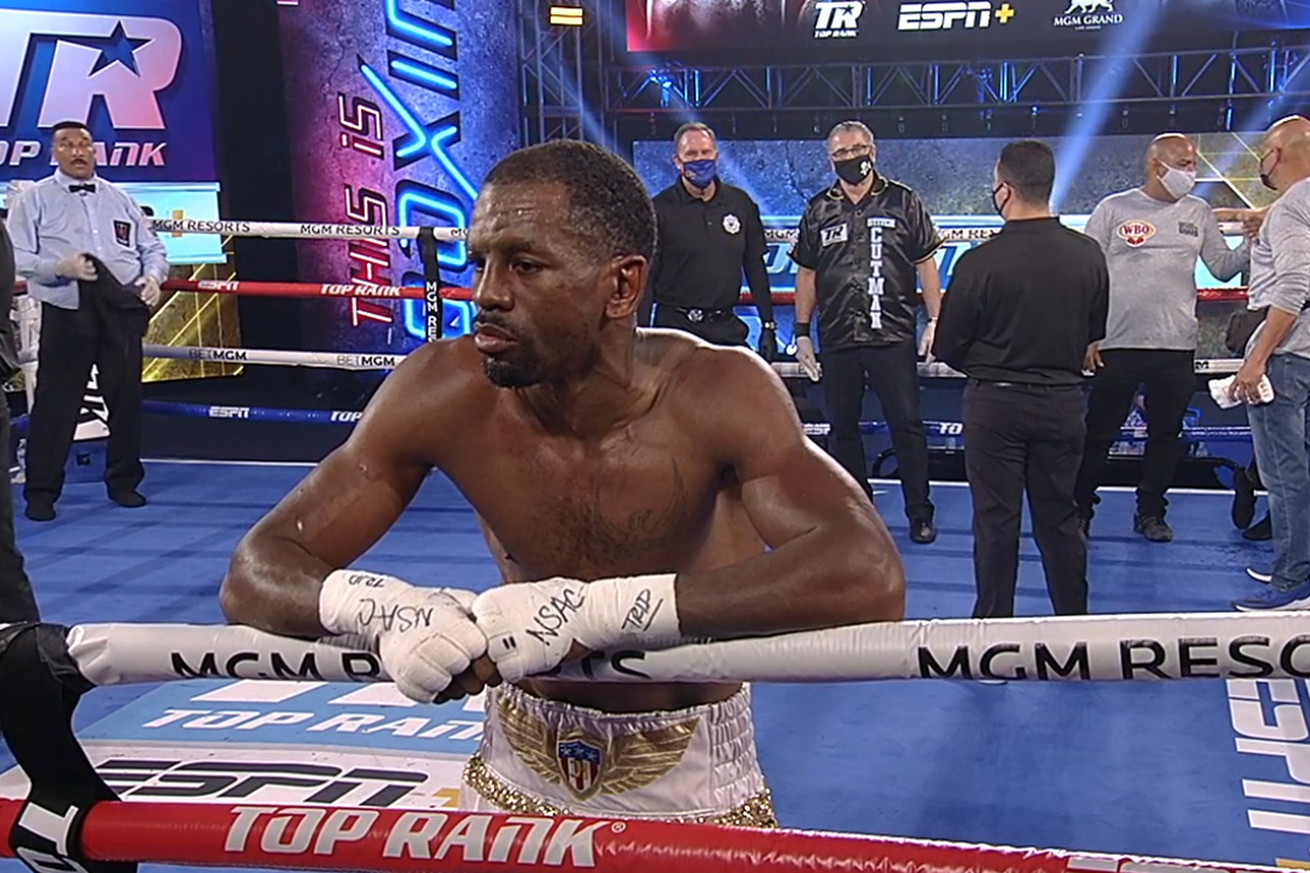 A cut was the only real concern tonight for Jamel Herring, but it’s a big concern.

Jamel Herring’s second WBO junior lightweight title defense probably didn’t play out and certainly didn’t end like he might have wanted, but the ex-Olympian still has his belt as a result of an odd disqualification victory over Jonathan Oquendo.

The 34-year-old Herring (22-2, 10 KO) was the better fighter throughout the bout, sharper and quicker and with superior skills, but the rugged veteran Oquendo (31-7, 19 KO) fought in the only way that gave him any shot, repeatedly making things rough and dirty on the inside, leading with his head, and staying in Herring’s wheelhouse.

The good news for Herring is that he scored a great third round knockdown on a left uppercut. The bad news — and the more important news — is that he suffered a cut in the fifth round due to what was ruled an intentional headbutt from the 37-year-old Puerto Rican fighter, who was getting his second and almost certainly last shot at a world title.

Herring opted to continue on in that fifth round, though he had an out there to say he couldn’t see and preserve a tentative November date against Carl Frampton. After the eighth round, with Herring struggling to keep Oquendo from doing the same reckless things Oquendo had been doing all night, things got confusing.

In the corner, Herring and his team, led by trainer Brian McIntyre, started saying Herring couldn’t see. That, of course, prompts any doctor to stop a fight. If you tell a ring doctor that, they are going to stop the fight. But McIntyre seemed confused on what would happen if they did that; he feared that Herring saying he couldn’t see would cause Herring to lose the fight, and asked referee Tony Weeks to explain the rule to him.

Weeks told McIntyre he couldn’t tell him what would happen, but while they were talking, the decision was over. The doctor was going to stop the fight, and that’s what happened. ESPN commentator and former world champion Tim Bradley seemed to think this meant Oquendo was the new champion, but that was never in play.

Then, however, Weeks wanted to rule a DQ, going back to the fact that the cut that stopped the fight had occurred due to an intentional headbutt from Oquendo in the fifth round. The Nevada commission wanted to send it to the cards for a technical decision, which Herring certainly would have won. Bad Left Hook had the fight 79-71 for Herring on two separate cards, and ESPN’s Andre Ward had it 76-74 for Herring, which seemed a little more critical of Herring than it should have been, but then you never know.

In the end, the DQ ruling won out, and that does seem to be the proper decision, in terms of following the rules and all. It’s a bit puzzling that the glut of officials representing the Nevada commission took as long as they did to come to a ruling they should all have been clear on, but it’s boxing, and life goes on at any rate.

Herring is unquestionably going to take criticism for this, fair or not, and he gave himself some after the fight, too.

“We knew coming in he was going to be aggressive with the head first, but it just kept repeating, and Tony finally caught on to it. I didn’t want it to end like that,” Herring said. “I’ve been there, but my team felt it was too much. So we just had to stop it or whatever.”

“It just got too ugly, I wasn’t too satisfied with my performance, to be honest with you,” he added. “I wasn’t happy with how it was looking. I’m disappointed with the outcome, because I’ve been through worse, but I’ve never been in that situation. It’s not all about just getting the win, it’s how you look. I’m a harsh critic on myself, but it is what it is.”

Herring said he felt no ill effects from the coronavirus diagnosis he had in June, which twice postponed this fight from its original July 2 and July 14 dates.

“Physically, I was good. I know he was trying to out-work me, but I was actually, in terms of conditioning, I was good. It just got too ugly and the second half to me was just bad.”

Herring also said that he’s still ready for Frampton next, but that cut was certainly not good, and getting him back in the ring by November now seems like a major longshot. One would guess the fight still happens, but we may be looking at early 2021 now instead of late 2020.

The 32-year-old Nelson will want to get moving toward a title fight sooner than later, but he impressed again here, ultimately overwhelming Ware, who once again was outclassed in a step up in competition.

Nelson (17-0, 14 KO) was cut on the brow in the second round on a clash of heads, but he also had shaken Ware (13-3-2, 8 KO) in the first round. Ware, 32, just didn’t work enough, didn’t really seem to think he could win, and he was just never fully in this, losing his third fight in his last four, all against solid opponents, but still.

Nelson was again cut on another clash in the fifth round, that one worse than the first one, and then in the sixth, he came out looking to finish. He wobbled Ware on a left hook, and though Ware tried to hang on and survive, he just couldn’t keep Nelson tied up or at distance long enough. Nelson poured it on and referee Jay Nady called it off after a series of good shots.

“My plan was to feel him out and not rush it too much, then pick it up. The headbutt (in the fifth round) was the perfect chance for me to pick it up,” Nelson said post-fight. “I didn’t feel too good coming into the fight, but no matter what, you gotta push through it. Being through the stuff I’ve been through in life, you gotta push. I’ve always been a workhorse, I’ve always worked hard.”

“I feel like I’m ready for a title eliminator, and then go for a world title,” Nelson said.

Nelson, who always has a themed entrance outfit, went with a tribute to the late Chadwick Boseman’s Black Panther tonight:

It’s only right that this is @SoColdNelson’s movie-inspired walkout fit tonight. #RIPChadBoseman

Rodriguez is a sensational prospect at 108/112. Rivera (18-7-3, 11 KO) is a 28-year-old vet, has been in with a lot of good fighters and gone the distance with most of them — Wilfredo Mendez, Pedro Guevara, and Duke Micah were his last three opponents. He went the distance with all of them. Rivera fought for a world title in 2014, which was his first stoppage loss. This was his second.

The 20-year-old Rodriguez (12-0, 8 KO) thrashed Rivera in the first round here, scoring three knockdowns and a legit blast-out shot on the final knockdown. Trainer Robert Garcia says Rodriguez is as talented as anyone in his gym, and every time you watch this kid you can see that. He’s fast, he’s got real pop, and he picks punches extremely well. This is a young fighter to watch, make no mistake. This was Rivera’s fourth straight loss so I don’t want to overstate this like Rodriguez did the unthinkable or something, but sometimes when you see a guy, you just know. Rodriguez is a “you just know” talent.

The 31-year-old Hernandez (13-10-2, 4 KO) has been around the block, in with guys like Efe Ajagba, Martin Bakole, Sergey Kuzmin, Joey Dawejko (twice), Adam Kownacki, and Michael Hunter. He’s usually been tough, but time may be wearing on him a bit, as he was stopped in two by Bakole last November, and now stopped pretty much as soon as the 20-year-old Anderson (6-0, 6 KO) decided to turn up the heat.

Anderson said he wanted to get some rounds, and he did that. Anderson is now 3-0 in the Top Rank bubble, this being his third fight and win since June 9. ESPN are pushing him hard, and you get why, he’s a talented American heavyweight prospect, but he’s still raw and has a lot to work on, and they may have to wind up frustrating him a bit to not rush him into a bad idea too quickly. That may also frustrate fans, but the end result of continuing to properly build him and let him improve can be worth it. The hype is getting going, but this is a guy who just turned pro 11 months ago, too.

Make it 6-0 (6KO) for @TeamBigBabyy, as the top Heavyweight prospect wears down & stops Rodney Hernandez.#HerringOquendo | LIVE NOW on ESPN+ pic.twitter.com/FedXLDzWov

Shot + Chaser … both of the power right hand variety