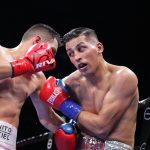 ONTARIO, Calif. – Middleweights Hugo Centeno and Juan Montiel fought to a split-decision draw Saturday night in the main event bout of the ‘PBC on FS1’ telecast.

It was a crossroads bout for Centeno, who was coming off a unanimous decision loss to Willie Monroe on June 1, and Montiel, a winner in five of his last seven bouts.

Montiel was the aggressor from the opening bell, walking Centeno down in hopes of landing a hook or overhand right. Centeno was stunned by a left hook with bout a minute left in round two, but was able to gather himself and make it out of the round.

Centeno would switch from conventional to southpaw as he utilized lateral movement to make the aggressive Montiel miss. As the bout progressed into the second half of the fight, Montiel was able to catch Centeno with a lead left hook to the head and body.

Sensing he was down in the fight, Montiel pressed the action more in round eight. Despite dealing with a cut over his eye from a punch, Montiel’s punch out increased, even though he was most throwing arm punches.

Both fighters stood in the pocket during the 10th round, exchanging hooks and crosses in the center of the ring. Both landed clean punches until the bell sounded to end the fight.

Centeno has only won once in his last four bouts.

Escandon, who resides in Ibague, Colombia, improves to 26-5 (18 knockouts) and snaps a string of three knockout losses.

The fight was supposed to be a showcase for Tepora, who last fought on June 1, defeating Jose Luis Gallegos by unanimous decision. The fight took place almost a year after Tepora scored an impressive knockout victory over Mexico’s Edivaldo Ortega on July 15 of last year.

Tepora dwarfed Escandon with his almost five-inch height advantage, raining punches down until the 35-year-old Escandon unleashed a left hook to the body, dropping Tepora to the canvas. Tepora writhed in pain as referee Jack Reiss counted him out at 1:30.

“This fight was very important to me because I know I needed to win if I wanted to continue forward with my career,’’ Escandon said. “I know I have a lot of fight left in me. I just want to thank my team. Ruben Guerrero, my trainer, was on me about listening to him in the corner and all his instructions worked perfectly.”

The 36-year-old twin brother of Anthony Dirrell was fighting for the first time since losing by knockout to Jose Uzcategui on Mar. 3 of last year. The fight was a rematch of his disqualification win over Uzcategui in May of 2017, where a brawl ensued after one of Dirrell’s cornermen sucker punched Uzcategui after the result of the fight was announced.

The southpaw Dirrell took a couple of rounds to get going, but began letting his hands go with more authority in round three, dropping Cabrera with a left hand to the head in round three.

Dirrell continued to dominate the fight against the flat-footed Cabrera. A three-punch combination dropped Cabrera to the canvas in round five and although he beat the count, Cabrera took several punches to the head, prompting referee Jerry Cantu to step in and stop the bout at 1:36.

Cabrera, who resides in Santo Domingo in the Dominican Republic, drops to 24-3, 16 KOs.

Welterweight Eimantas Stanionis of Lithuania improved to 10-0, 7 KOs by knocking out Dominican Julio Cesar Sanchez (11-3, 6 KOs) at 2:05 of the third round.

Middleweight Petr Khamukov (5-0, 2 KOs) notched a knockout win when opponent Maceo Crowder (2-4, 1 KO) did not answer the third round. Khamukov dropped Crowder during the opening round.