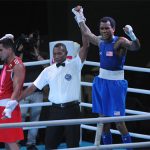 “When I was locked up, I spent a lot of time reflecting on life,” Quinton Randall recalled.

At the age of 18, the currently undefeated welterweight was sentenced to three years in a Texas state maximum-security penitentiary for burglary, having spent nearly 24 hours a day in solitary confinement.

However Randall found a way to prevent himself from “going crazy.”

“I ordered a two-year subscription of The Ring Magazine and I thought about what I could do to make my son proud,” he stated.

After his release from prison, a dream became a reality for Randall.

Then tragedy struck soon after.

Just a month after Randall became the man his son could admire, the little boy whose smile and zest for life guided him through the most difficult of tribulations was tragically and unexpectedly ripped from his life.

Eight-year-old Quenell Randall succumbed to injuries suffered in a car accident in January 2017.

Randall turned pro in February 2019 and has quickly racked up six victories, including two by way of stoppage.

The 30-year-old native of Houston, Texas, will face undefeated junior welterweight Jan Carlos Rivera (4-0, 4 KOs) in a six-round clash on the undercard of the highly-anticipated lightweight championship main event between Vasiliy Lomachenko and Teofimo Lopez, on Saturday, at the Top Rank “Bubble” in Las Vegas.

Randall was initially slated to face another unbeaten 140-pounder in Dmytro Mytrofanov (9-0-1, 5 KOs) but the 30-year-old Ukrainian abruptly withdrew from the fight.

Peter Kahn, Randall’s manager, spoke exclusively with The Ring, on Tuesday, with details.

“We weren’t provided with an actual reason [why Mytrofanov pulled out of the fight]. We were just told that he was out,” he revealed.

Why Mytrofanov chose not to fight is not a concern for Kahn.

“Truthfully when this situation occurs, that’s the last thing that’s on my mind,” he added. “I immediately think about solutions.”

In his most recent win, in October 2019, Rivera scored a first round knockout of journeyman Ricardo Escajeda in Philadelphia. But although Randall’s new opponent is undefeated with all wins coming by way of knockout, Kahn expects his pupil to shine.

“At this stage, he should be able to beat everyone that is put in front of him,” Kahn said. “He already has the maturity mentally and he has the physical maturity.

“To make up for lost time, we have to face undefeated fighters and we have to walk through them. We welcome the challenge.”

Rivera, a 26-year-old hailing from Puerto Rico, has yet to face an opponent with a winning record but Kahn received intel that the fight could be a banger.

“I don’t know all of Rivera’s opponents but people from the Philadelphia area who have seen him fight have expressed that this will be a good scrap.”

The post In the face of tragedy, Quinton Randall fights on appeared first on The Ring.